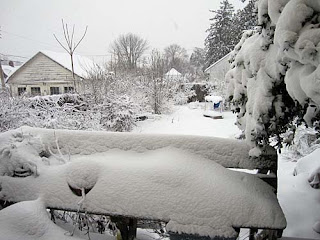 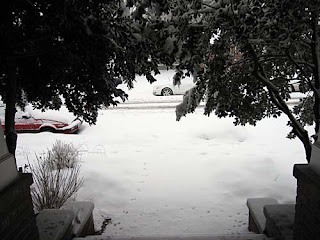 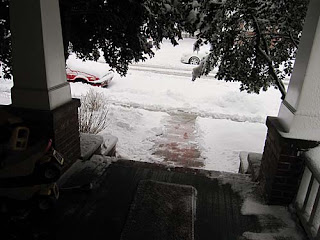 8 am of Saturday. We have 4-5 inches of very very very wet snow. It appears to be snowing more right now than all of yesterday.

EDIT: WE've had 8 more inches of the fluffier stuff. Made me glad I went out and got the heavy stuff shoveled up. But now mom's without power, and that' s bad.
Carefully crafted for your viewing pleasure by Joeymom at 9:44 AM 4 comments:

I had to go to the grocery store. It's going to snow pretty heavily here this weekend, and I am going to run out of my meds, so I had to have them refilled.*** Also, they called school pre-emptively, and I didn't want to take the guys into a crowded grocery store the day of a Snowtastrophe, so off I went to grab a few things in case we lose power, like marshmallows. Oh, and some stuff for mom to make a lasagne and some soup, in case she gets snowed in for a few days, which is far more likely than me being snowed in for a few days, as I live on a main drag downtown.

The scene at the grocery was incredible. Insane. There was no produce. I got my hands on the last head of cabbage. There were no bananas, no grapes, no pears, no berries, no broccoli, no carrots, no onions... I grabbed a head of lettuce, which the poor produce manager had brought out trying to stock something. People were taking it faster than she could stock it, right out of the box beside her.

There was no bread, no cheese, no sausage, no hamburger. The deli should have closed before I got there, but were so busy, there wasn't time to close. I did manage to get some cold cuts. There were no roasts, except sirloin. They were restocking the chicken, it had been cleared. There were some expensive cuts of things, but anything reasonable was gone. Oh, and there was plenty of stew meat at $3 a pound. Who pays $3 a pound for stew meat?

Someone tried to sneak my head of cabbage from my basket while I was perusing the eggs. I saw a person pick up the last package of hamburger, and get accosted by three other shoppers who wanted it. I wasn't the only one who found the whole thing absolutely ridiculous, and so there was a group of us who just burst out laughing every time we passed each other, with comments of, "We're all gonna DIE!!!" High adventure in aisle five!

Fortunately, I have another little grocery store I like very much, but they haven't even tried to compete with Wegman's prices. However, desperate days, my friends, desperate days. I went there and paid a little more for my stuff, but they actually had the stuff. Because when they are calling for two feet of snow in this part of the world, it is indeed Snowpocalypse. It might take me a couple days to get out of my driveway, and I have two boys to entertain for those two or three days. And they are home from school tomorrow. Let the party begin!!!


***And on top of that, I have to go back tomorrow. My meds didn't get filled before the pharmacy closed.
Carefully crafted for your viewing pleasure by Joeymom at 11:13 PM 5 comments:

There's been a lot of negativity blowing in the wind this week. Lots of little drops of water that converge into a massive waterfall. Or that last little flake that starts the avalanche is tossing about on the breeze. Soap operas and novellas here that I usually leave in the shadows of my life instead of pasting into the public view of the internet. The ravages of hypotheticals and the ire they raise, the what-ifs, the should-bes, the thoughts of things gone awry. The accusations of blowing roses (I think that will now be a permanent part of my image vocabulary) which get me thinking about life, and the way we thought it would be. All of which gets exasperated by exhaustion, stress, drama, and of course, depression. One of the joys of clinical depression is that all the negativity can get magnified. Oh, fun. Well, that's what the Wellbutrin is for, right?

I've done my weighing-in on the cure non-issue. The semantics of it all seems to get mired in the problems of parenting, existing, and expectations. It's as sticky as it gets, all the stickier because its completely moot. All it does is aggravate the negativity.

No, this isn't the way we planned life to be. Heck, last fall I had all these plans for cleaning and cooking and sewing and working and... life happened instead. All those dreams and thoughts and hopes and fears for my life I had before Joey? All moot. That's not what happened. Life happened instead. Funny thing, life. It has a funny way of rolling aside into little eddies instead of sticking to the main current. Lots of little droplets, running downhill together to the sea. If we separate the droplets out and look at them, which can we blame for sending us into the eddy?

Perhaps it is more my way of coping with stress to try to start from here. I suppose it is an attitude that got emphasized in studying Buddhism, where questions of origins are often considered "not edifying", and so left unanswered. How we got here? Only important to avoid getting here again, if this isn't where we want to be. So often, we can't avoid it, so mulling on it now isn't helping. Here we are. Where to now? I would much prefer resources going into educational strategies and support systems for autistic people, because Joey is autistic, and he had needs, right now. How he got to be autistic is a mystery, and not one I'm so sure would be that useful to solve. "Would you cure him?" is not an edifying question. I have no time for that right now. I have to start from the right here and right now, not some hypothetical possible starting point.

Oh, sure, we have to think of possibilities. At the same time, we end up with chicken-and-egg logic loops and angels-on-pinheads academic games that just aren't that useful right now. It just gets mired in negativity.

And as for the roses thing? I'm not going to tell anybody they don't have the right to feel angry, bitter, resentful, sad, depressed, despondent, stressed, tired, desperate, frustrated. When your life isn't going as planned, when you watch people you love lost in frustration, in depression, struggling, hurting, trying so hard, unhappy, isolated, stressed, it gets to you. And I'm not just talking about our autistic loved ones, either. The morass is laid out before you, and to get mired in it like Brer Rabbit in the Tar Baby. You have the right to get lost in the morass. That's being human. Some might say it is weak to do so, but I disagree- even the strongest have the right to feel all of these things, and we all get a little wandery sometimes. But is that useful? Are you feeling any better? Are you a better person for getting lost in your own resentment, your own anger, your own grief? Isn't there a difference between feeling these things, and getting lost or mired in them? You know why you should make lemonade when life hands you lemons? Because lemonade is constructive, sweet, and even fun. Citrus gone soft and moldy isn't only not useful, it gets a little smelly. And makes the other lemons go bad quicker. But hey, they're your lemons. Sometimes you can just enjoy looking at the lemons. There isn't always a rush for lemonade. Not everyone even likes lemonade. Maybe we should squeeze them a use a little zest, and make lemoncake instead. Or they might make a nice wreath...

Once caught in our eddy, it can be hard to escape the pull of that swirl. Once you find yourself drowning in lemons, you might not exactly be thinking "hmmm, what I really need now is a nice, cold glass of this stuff." And as I've said before, dump a little clinical depression on top, and you find you're really being pulled down into the vortex. One thing I do when I feel that pull, is I come here, and write about Joey and Andy. I write about things that happened. Sometimes its good to share the pitfalls, the hard stuff, the things that I wonder if its happening out there to other folks. More times its better to write about things going right, partly to keep them in the fore. There is little more one can do to counter darkness than to drown it in light- open the door, turn on the light, light the candle, raise the blinds and draw back the drapes. Air out the bad stuff, emphasize the good stuff, and start from here. Now take a step forward. One foot in front of the other sounds so easy, but we all know how much of a challenge it can really be. We are special needs parents, after all.
Carefully crafted for your viewing pleasure by Joeymom at 8:21 PM 3 comments:

Most kids have imaginary friends. It is part of being a child, to explore the world and see the magic there, and to provide onesself company when it is needed. This is part of the blur between reality and fantasy that makes childhood so fascinating to adults, and so fun for kids.

You may recall that Andy has an imaginary friend, T-Rex Dinosaur. We have added to the menagerie of imaginary friends, but none is so prominent, and only one other leaves the house (that would be Piggie... long story).

You may also recall that I didn't know if Joey had an imaginary friend. I am now proud and pleased to report that we know, without a doubt. Joey has imaginary friends. Note the plural.

In fact, he has an imaginary class. They are named Aaron, Eric, and Sophia. Joey is the teacher, and these three are his students. They do math problems. They have reading assignments. When they misbehave, Joey corrects them and tells them how to behave correctly, and why what they were doing was wrong. If he's a little harsh with them, they get upset and he has to apologize and comfort them.

Lots of insights to be had into his world, I think. I'm paying close attention, never fear.
Carefully crafted for your viewing pleasure by Joeymom at 7:53 AM 1 comment: 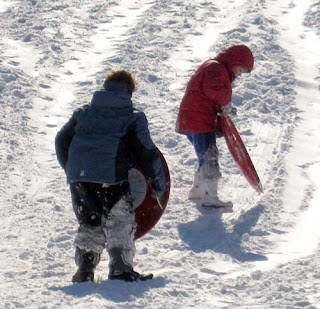 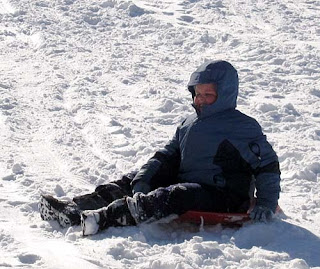 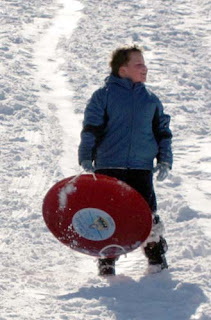 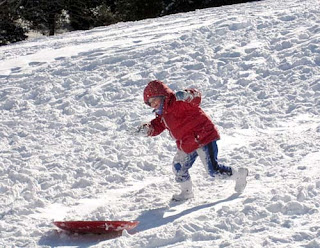 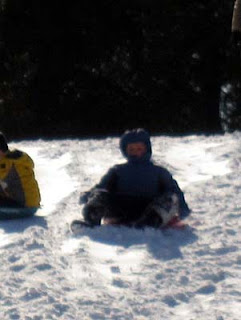 Carefully crafted for your viewing pleasure by Joeymom at 6:53 PM 1 comment: