We are at the beach, living it up. Coming attractions to the blog:

Andy rides rides.
Joey get on the Big Boy rides.
Boys have their first boat ride.
Joey rolls a 150 at Skeeball.
Mom and Dad get two evenings to themselves.

Well, I'll share as much as I can... when we get back. I'm busy snuggling boys. :)
Carefully crafted for your viewing pleasure by Joeymom at 10:13 PM 2 comments: 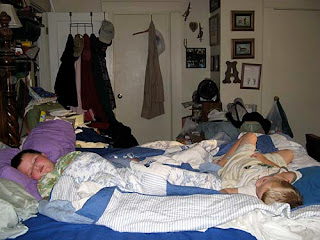 You know it is going to be a good day when you wake up with both boys fast asleep in your bed. Don't they look like perfect, squishable little angels? (That's because they ARE! And never fear, I squished them.) 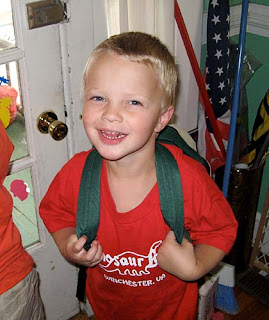 It was one sweet prince's first day back to school. we were worried, because there was a new teacher, a new building, and lots of new classmates. I have signed Andy up for the 3-day half-day preschool, so most of the kids in his class are preschool "newbies." Most kids who have a year under their belt go on to the five-day or the full-day. He has a couple familiar faces in there, one from his old class, one from church. 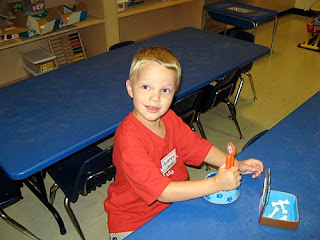 Andy hopped right in and got down to business. I think the teacher was surprised. This is only her fourth year teaching preschool. Let's all wish her luck. Anyway, Andy found a nice game to play and settled right in, so we kissed him and hugged him and left him to his world. 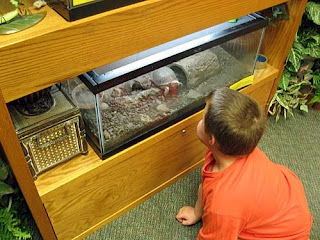 Joey has been a little depressed lately, and leaving Andy at school was very upsetting for him. A visit to Max and Charlie and Jack-Jack didn't cheer him up, so I took him to the Bug Box. And this time, I remembered a camera. He loves the turtles and the snakes, and he's interested in the spiders and butterflies. Most of the bug-bugs, like the stick bugs and the grasshopper, don't hold his attention- I don't think he can discern them from their surrounds yet, or it take a lot of energy for him to do it. The snake was on the move today, so tha brought a giggle out of him. 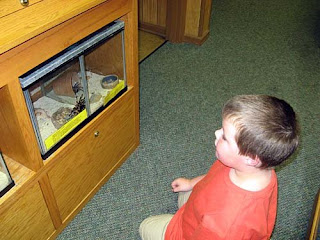 We didn't stay as long as usual. He was still sad and missing Andy, and there were some very little kids there today, who were whiny. Joey got very upset and concerned about them when they cried or complained, and I think that wore him out, too.

Then we went and got Andy. That made Joey very, very happy indeed.
Carefully crafted for your viewing pleasure by Joeymom at 9:55 PM 2 comments:

Ready for the morning

Andy goes to preschool in the morning.

Then we start packing for the BEACH!!!!
Carefully crafted for your viewing pleasure by Joeymom at 10:02 PM No comments:

As the school year rushes up upon us, we are definitely taking a new tack. Because the elementary school lunches are just not appropriate for Joey (he has put on a ton of weight!), we are sending in packed lunches and breakfasts this year. He will buy milk at school.

So we are searching for ideas. Joey's entire daily calorie intake should be 1400-1600 calories, so we need breakfasts around 350 calories and lunches to be around 450-500 calories. Also, we want his total daily carb intake to be less than 200g, and with our family history, maybe no more than 180g. So 45g (3 servings) at breakfast, 60g (4 servings) at lunch, give or take. He needs to have a serving of protein at breakfast and two at lunch.

So far, we have cottage cheese and fruit and yogurt for breakfasts. I wish he ate eggs again. We're going to have to try to get that back into the picture.

For lunches, I could roll veggies in cheese or lunchmeats. I'm hoping he'll keep eating broccoli and sweet potatoes for me. I like to get him eating nuts, too. PB&J is a fine standby, though both boys have been liking those at dinner (and I'd rather go heavier at lunch, and keep the light dinner.) I wish he ate lettuce, that would make things a lot easier. :P

Anybody got any great ideas of delectable foods that can be packed for school? I doubt we have access to either a fridge or a microwave. :(

And as you can see from the timestamp, I am losing sleep over this.
Carefully crafted for your viewing pleasure by Joeymom at 1:15 AM 9 comments: