We spent some time at the park today. Joey was very interested in two older girls- well, one was almost eight, and the other was probably no older than 12. The other kids were all little ones, the kind that Andy likes to take around by the hand and show things to. While Andy was indulging himself, Joey kept trying to engage these two young ladies. They clearly were at a complete loss for what to do. He tried several different approaches to engaging with them. First, he noted that the girls were tall, and he liked them. Then he tried to teach them some sign language, and the Signing Time theme song. Then he tried to include them in some of his own play, like asking if they wanted to make a mulch cake and sing Happy Birthday, or announcing he was an ice cream truck, and asking them to get in.

None of this worked. The girls retreated to a corner and were kinda staring at him as he satisfied himself by making a mulch cake (a pile of mulch that you then pretend to eat), then teaching some of the little ones how to sign "black cat." They were whispering, and I was close enough to catch "he's so weird."

And I put the body language, the eye track, and the words together, and realized they were talking about Joey.

"Oh, its OK," I burst in on their huddle from my place by the climbing tree. "He's just trying to play with you. He's autistic."

"I don't know what that is," the older girl replied, but there was a cue, a way she kept looking at him, and now at me- she wasn't dismissing him. She wanted to know; she had made the statement as a question, and was now awaiting an answer.

I have no idea how you explain autism to a 12-year-old girl. I did my best. I explained he had problems communicating and speaking, and so didn't know how to ask the girls to play, or how to include them in his games, and was doing the best he could. The younger girl intimated that she thought him weird as in scary, and I assured her he wasn't going to hurt her, he was just trying to say "Hi, I'm Joey, let's play!" the way he knew how. If they wanted to play with him, they would have to join his game, or explain what they wanted to play, and I would be happy to help. They were unsure, and decided they wanted to do "girl stuff".

But it was a telling conversation. Here was a child not that much older than Joey, but the differences between her social connections and communication and Joey's ability to play and communicate were startling. I am sure they thought he was somehow intellectually challenged, because his behavior and language was so unexpected and unpredictable. The fear was startling, too. I don't think of Joey as scary at all, especially at the park when he is in a decent mood, like he was today. The older girl's interest in him was also something I found notable; she didn't just reject him outright. She wanted to know more about him. I need better language, simpler terms for talking about Joey to his peers- direct but inclusive, language that makes it clear that Joey does things in his own way- so does everybody- and helps his peers find common ground, a point where they include him, and he includes them. How do you explain to a 12-year-old that if they can find a way to include Joey, he's a lovely person to know and play with, and would be thrilled to have friends and to be a friend? That "weird" is really just "different", and we're all different? How does one communicate such a idea in a child at the stage when being the same as their social peers is so important?

And what can we do to help Joey make those connections he so very much wants, clearly wants? What skills does he need to be able to engage his peers, and join their games? What is the disconnect that results in that label of "weird", which becomes the brick wall between Joey and people around him? What crucial social skills are missing? What makes Joey's attempt to engage so very different than how I jumped in on the conversation of these two girls? Why was my engage tactic successful, when his was not?

These are the questions we are now asking, in thinking about the road ahead, the plans for IEPs and programs and therapies. How much frustration can we mitigate, how many skill gaps can we fill, before Joey is 12 and feels that intense need to fit in somewhere, anywhere? What tools do I need to provide and teach as a safety net, if he finds that, like his mom, he fits in nowhere?
Carefully crafted for your viewing pleasure by Joeymom at 10:39 PM 2 comments: 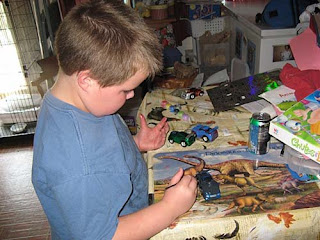 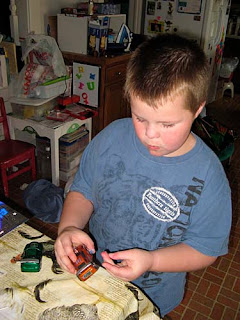 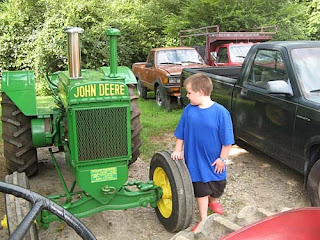 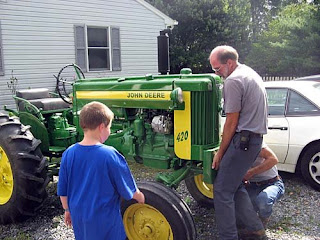 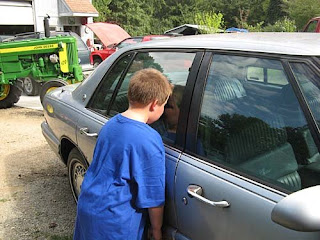 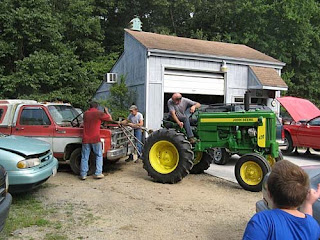 Carefully crafted for your viewing pleasure by Joeymom at 11:57 AM 2 comments:

There is a magic word in this house, a word that can create a state of meltdown faster than any other. Just the idle breath of this word sends my children into spasms.

The word is "quickly."

This well-known casual prompt to keep young children from dillying and dallying brings on utter panic to Joey. The world is racing past, time goes into warp, and like the White Rabbit, we will now be Late!

It is 8:42am, and we need to leave the house at 8:45 to get Andy to camp. Joey discovers he has no pockets to stash his mini-clock.

"No pockets!" he complains, slapping the sides of his legs where pockets ought to be in any shorts sold for young boys. But Walmart begs to differ. "No pockets!" There is a glisten in his eyes, a strain in his voice- this will not do. I try to think fast, while trying to gather up the things Andy will need at camp and find my shoes, which have mysteriously walked away from the front hall.

"Well, run upstairs and change into another pair of shorts, then, quickly!" The last slips from my lips involuntarily. If I could have, I would have reached out and snatched the word back and jammed it down my own throat. But it is too late. It hangs in the air, as Joey lets out a screech and races up the stairs with screams of "Quickly! Quickly!"

8:44 am. I still hear the screams of "Quickly! Quickly!" upstairs as I manage to get Andy into his flip-flops and out the door.

"Come on, Joey," I call encouragingly, resulting in more frantic chanting of "Quickly! Quickly!" He appears at the top of the stairs, holding another pair of shorts, this one a pair of converted boxers- he is particularly fond of them, but they also have no pockets. "Quickly!" he squeals at me plaintively.

I avert the meltdown by coaxing him down the stairs and helping him into these new shorts, without mentioning they do no have pockets, nor does he have his clock. Fortunately, his watch is strapped tightly to his wrist. This would have taken a lot less time if I had just stopped and instead of using The Word, had gone upstairs to help him with his clothes.

Never has there ever been a more counter-productive word invented in human language. Irony at its best.
Carefully crafted for your viewing pleasure by Joeymom at 8:18 PM 1 comment: 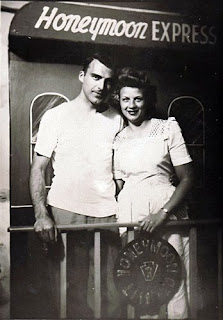 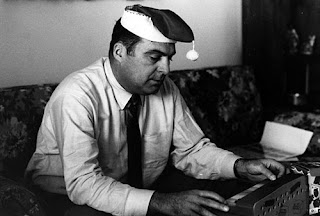 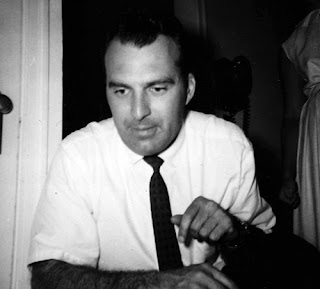 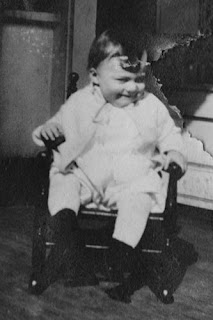 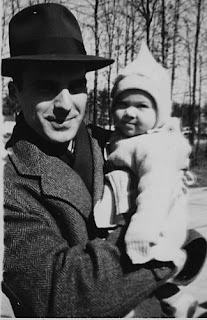 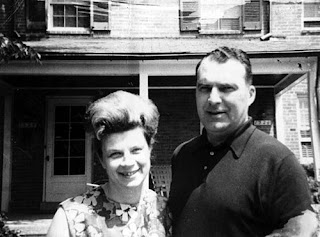 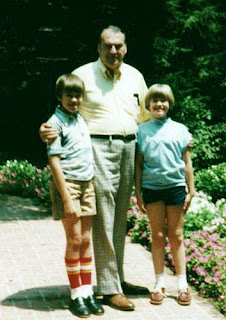 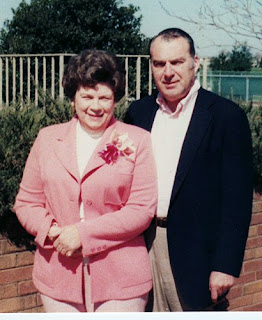 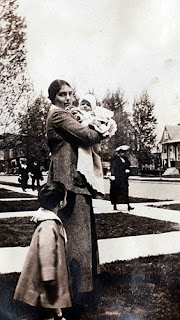 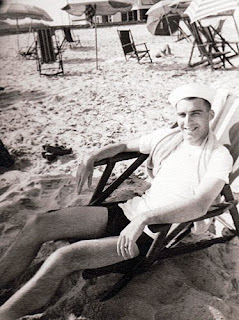 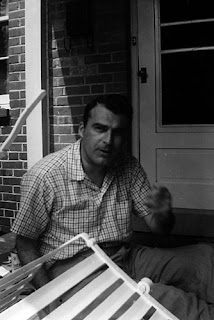 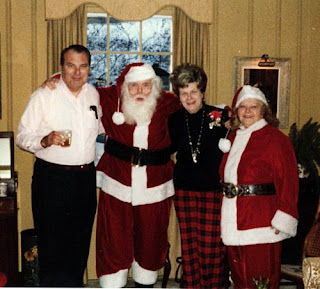 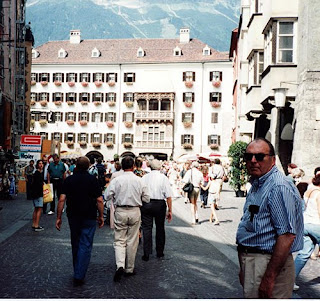 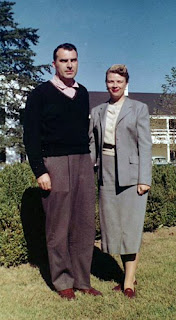 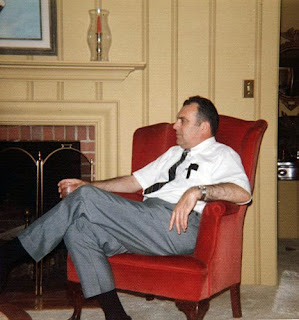 We love you, Pop. We miss you.
Carefully crafted for your viewing pleasure by Joeymom at 9:53 AM 2 comments: