A Visit In The Morning

My bestest girl friend and old college roommate is in town, and I am so excited I am going to get to see her in the morning, I could just go SQUEEE!!!

And I am so nervous that I can't sleep.

I haven't seen Sue in a few years. Her son is about six months younger than Andy, and she has a daughter who is a preschooler. The last time I saw her son, he was just walking. I have never seen the daughter at all.

Sue's best quality is she tells it as she sees it. She doesn't allow for excuses in facing problems. She's not afraid to tell you when she sees a problem. She's not shy about helping you fix it. If you need to brainstorm ways of coping with an issue, she's the one to call. She's awesome.

On the other hand, with our family, what one sees is all too often the tip of a mysterious iceberg. A day with Joey might look like one thing, and be something completely different. The usual ideas and fixes, or the ones that may look like they work or might be helpful, often are nothing of the sort. The strategies that work with a lot of kids only escalate the anxiety for Joey. And there is no getting around it: tomorrow is going to be a hard day for Joey. It won't be his schedule. We don't know what we are going to do when we get to Northern VA to see Sue and her kids. I suggested the Reston zoo, but apparently she took her kids to the National Zoo today, so they may be zoo-ed out. (Zoos tend to be good to take my kids, because there is flexibility but familiarity- they know what a zoo is and what to expect at one, so if I have one little guy out of sorts, the other is still entertained).

I think a great deal of this woman. She is a powerful, dynamic person of dignity, character, and high respect. What she will think of me and my guys when she finds my back-up parenting plan is to bring iTouches loaded with Angry Birds and am not afraid to use them to get us through lunch? That my way of letting Joey get comfortable is to let him be Quack or Buzz Lightyear, and play along? When she finds my best trick for getting Joey's behavior under control if he starts to melt down is to hug him instead of just putting him in time out or whatever other method people use these days? We have differed and butted heads about differences in opinion in such kinds of matters before.

So many people react to Joey in so many different ways, and to how we handle Joey. Sue has not really seen Joey or had to deal with his autism before. Though I have faith that Sue, being Sue, will not love us the less or turn away from us, I simply don't know how this will play out. It is likely to be a long day for Joey, so I have lots of extra prep to do in a few hours to mitigate and support him through it. And though I know few people really understand the energy and work that goes into such a day for us, I at least hope she'll understand, no matter what happens, that I am doing my best for my guys.

And I wouldn't miss it for the world.
Carefully crafted for your viewing pleasure by Joeymom at 12:02 AM 1 comment:

I have done my best this summer to keep to a very strict schedule:

In the past, Joey was a fairly flexible little guy. As a baby, he was happy a clam until he got really hungry, and since I was pretty regular with the food, he was all good, no matter what was going on.

Then he got a little bigger, and he needed to know what was coming. So we would talk about what would be happening that day, but we could be fairly vague. "Going on an adventure" was fine, he knew something fun was coming and it didn't much matter what. As long as the food came on time- not just "eventually"- he was all good.

Then he shifted to his obsession with clocks. However, as long as he knew where he was going, who would be there, and when to go, he was good. And life rolled merrily on for school. Not so much at home.

Here, life is more fluid. That is OK when you're only awake and home for, say, four hours; but when that fluidity becomes an all-day venture, it overwhelms Joey. His anxiety from his wild school year hasn't ebbed one scunce. So to help him out, I have a very strict schedule.

Deviations result in increased anxiety, for better or for worse. Today we had a movie party with one his old classmates, and he was a bundle of nerves all day. He hs a birthday party to attend on Saturday, but kept insisting it was today. Nothing we said or did would change his view: the party was today, and it was today, and today was the party, and there is a party at D's today, and he was going to miss the party... and from there, the world started ending. Only we had discussed in detail what today would be, since rain was in the air: relax with Peep and Angry Birds, lunch with Grandma, movie party.

But it wasn't activity-lunch-pool. So all was doomed.

He was happy at lunch. He was happy with his friend here. But all the minutes around those events? That poor child worried himself into a frenzy.

On top of that, Andy is having a hard time.

We have a lot of trouble getting Andy to eat. He is very picky with his food (though we are definitely back to "picky" and not in the realm of "food aversive/neophobe" anymore, hallelujah), he has a slow-emptying stomach (so he gets full fast), and on top of that, we're having a growth spurt. That child has no reserves left. If he fail to eat, if I don't push the water and the snacks, he get terribly thin and get headaches fast. He's already sound-sensitive, so you can imagine what a headache does for that child. Screaming ball of flesh. Without much flesh.

I am in a Catch-22 world of food here. Andy needs every calorie I can pack onto him and into him. Joey, with his movement and stamina issues on top of inheriting my gloriously bad metabolism, needs fewer calories than most kids his age, and is already having weight issues. We're working on creative ways to sneak Andy food, but it isn't easy. If Andy has food, Joey wants it to. Trying to explain to them both why Andy needs food and Joey doesn't hasn't really helped. I'm sure I'll get plenty of suggestions, but trust me, we've been through most ideas and failed miserably with them all. Andy is sensitive about being "skinny" and Joey is sensitive about being "fat," That's quite enough to create a roller-coaster ride without anything else going on.

You know, I love being able to squish and snuggle those boys all day long, but I'll be glad next week went both are at summer programs, with predictability and schedule and everything that makes them more comfortable. And I can sneak a milkshake to Andy in the mornings.
Carefully crafted for your viewing pleasure by Joeymom at 12:52 AM 3 comments: 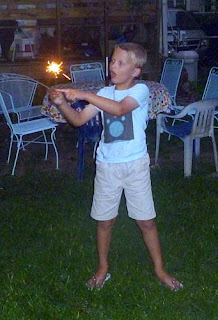 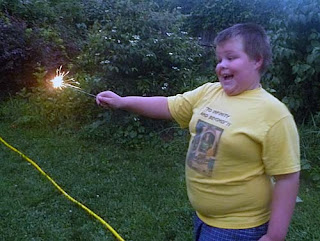 Carefully crafted for your viewing pleasure by Joeymom at 9:59 PM 1 comment: 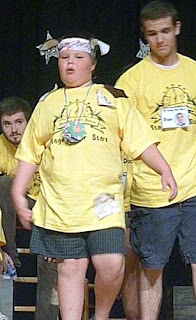 Joey just finished his week of Stage Door Stars, and it was Totally. Awesome.

This is a program to help kids with communication disorders and disabilities get together and have intensive therapy for a week, under the guise of putting on a play. They have a speech therapist, occupational therapists, theater teachers, special ed teachers, art teachers... and every kid gets a "coach" assigned to them for the week.

Joey loved loved loved it. He was bit nervous the first day, and pretended to be Quack the Duck all week, but he liked it, he wants to do it again next year, and he had a lot of fun.

The play was based on the book, Giraffes Can't Dance by Giles Andreae. Joey was a rhinoceros. He was fabulous. I would show you the clips, but you can see a lot of the other kids, and some of them would prefer not to be on the internet. So you have to take my word for it, he was fabulous and his usual beautiful hammy self up there.

However, he was also his usual beat behind on the dance routines and most of the lines. We might need to stress the sign language and visual supports more in stuff like this, because I know he notices and finds it frustrating.

The kids do everything to put on the play. They make the costumes (which included a tail they had to stuff, the headbands, the necklaces, and attaching squares of fabric to their t-shirts), the props, the set- there were paper flowers, paper plate snakes, paper ants, trees to be made, stars for the backdrop, everything. They had a choreographer come help them learn to move and dance, a drama instructor and director, they had the kids do everything. Each kid had a little dance they did with one or two other kids, a section of the book to say, and several group dances. They did a great job. 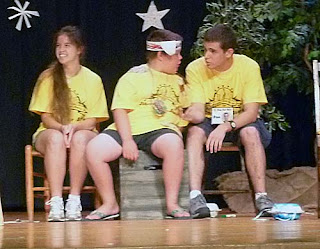 Joey had two awesome coaches for the week. He got to have two because during orientation, the staff was graced with witnessing one of Joey's bolting dashes out the door. I showed them Peep and the Big Wide World on the first day and explained the whole Quack thing, and then fell right into it. They didn't even mind when he signed himself in as Quack Guyton. Apparently, they went home, checked out the website, and were right in tune to help Joey along. They were awesome. 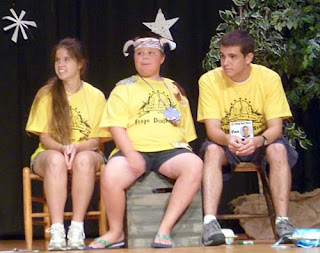 They have a couple of one-day workshops in the fall, and we are so totally there. And next summer? Sign us up!
Carefully crafted for your viewing pleasure by Joeymom at 12:19 AM 2 comments: