We are having a whopper of an afternoon. Joey has so far broken one of Andy's toys, written all over one of Andy's artworks, and "ruined" something else we haven't yet clearly identified, but JOey came out and informed Andy of the deed. In the world of sibling rivalry, it is the deliberate nature of this destruction that is concerning us most. Here come our deerstalkers and pipes- another mystery is upon us.

Is this simple sibling rivalry? Are we acting out in place of lashing out with words? Instead of calling brother names, we scribble on his things when he isn't complying with our wishes? And what does Joey want? Does he want Andy to play with him? Was there some other action we missed- for example, did Andy tease him, hit him, threaten him? Did Andy tell Joey to go away?

Is this something deeper? Is he lashing out against his brother because he is having troubles elsewhere? Is he using Andy as a surrogate to lash out at, instead of someone at school or the playpark?

Is this a acting out against something totally unrelated? Other frustrations, other issues, other discomforts?

If we solve this mystery or not, we still need to do something. This is not acceptable behavior. Joey needs tools for dealing with frustration, discomfort, and unhappiness that are not destructive. We need to help him manage stress. He needs a better way to communicate stress. Screaming at the top of his lungs when we express our disappointment is just not that helpful or constructive.

UPDATE: We finally got Joey calmed down enough to talk to us. Apparently, some of the kids at school are calling him names, and it makes him angry. He felt much better after telling JoeyAndyDad all about it.
Carefully crafted for your viewing pleasure by Joeymom at 4:25 PM 5 comments:

On the Playground: Another Day

Not one to waste a decent afternoon, I took the boys to the park after Joey got off the bus today. We've been spending a good bit of time at the park whenever we can, because it is good for the boys and Andy begs to go. He likes it best when there are lots of other kids there. It likes it even better when Joey is also there, because he is guaranteed a playmate.

However, we have been increasingly running into issues at the park. Joey has a very set way of dealing with large spaces, with other people, and with play. He cannot see a couple of kids playing and just jump into the game; he has to be told very specifically what the other children are playing, and what his role can be. This has left him open to some very unfortunate situations when children are not so nice, and there are some children at the park, and even in his classes at school, who are, to be frank, mean. They don't just casually exclude Joey, or fail to include him; they actively go out of their way to make it clear that they are shutting him out and casting him off, so that he knows it. Honestly, it takes a good deal of going out of your way to make it painful enough to Joey that he actually says something about it and knows you are doing it on purpose. Little jerks.

Joey and Andy kind of help each other on the playground, as many siblings do. Andy often gives Joey a few extra cues to catch on to a game, some extra repetition to pull him into play. Also, nobody messes with his Joey. When he sees those mean kids taunting him, he has been known to walk right up to them and say, "You weave my Joey awone!"

Keep in mind that the vast majority of time, the playground chorus is, "Come on, Joey! Come play!" from Andy. Or after a few minutes, Joey's offers of, "Andy! I want to play with you!" is often met with unreserved enthusiasm. But a touch here and there, Andy gets tired of Joey, and wants to play with someone else and do his own thing; and Joey has a very difficult time playing with anyone else, because he and Andy know each other very well, and so Andy automatically and efficiently compensates for Joey's needs. Andy knows how to talk to Joey, how to play with Joey, how to draw Joey into a game and include him. Because of Joey's difficulties with language and social cues, other children have a harder time even when they are trying to be inclusive.


We were in the middle of a "I don't want to play with you!" mood. Joey gave up and started playing alone on the slides (I offered to push him on the swing, but I guess playing with Mom isn't always cool when you are feeling uncool). Andy headed over to the merry-go-round. Not too long ago, the idea of Andy getting on the merry-go-round was ludicrous. He still doesn't care to get on it, he prefers to push, or kick slowly and control the speed. But this time, he was with some new friends, a boy about his age, another older, and a third probably between the other two. They were playing pirates, and they all piled onto the merry-go-round to go "sailing." The bigger boy started pushing, faster, faster. I moved closer, because I knew the breakpoint was nearing. It was crossed. Andy hates feeling like he is going to fall off, and the merry-go-round was going too fast. He started to wail.

Suddenly, Joey darted in from my left. He must have heard Andy and slid down fast to get there so quick. He was calling to the bigger boy, "Stop! Stop! Andy doesn't like to go fast!" and he grabbed the merry-go-round and dug in his heels to slow it down. The other boys were voicing their displeasure, but Andy hopped off, Joey let go.

"Can I play with you, Andy?" Joey asked.

"Sure, come on, Joey!" was the happy reply, and they both ran off to the climbing platforms, leaving the new "friends" behind to spin at their own pace. Because, after all, they're brothers. That's what brothers do.
Carefully crafted for your viewing pleasure by Joeymom at 10:12 PM 5 comments:

One of the great myths of autism: people with autism understand things very literally, and therefore do not "get" jokes, especially jokes involving puns or other non-literal language.

Knock-Knock.
Who's there?
Blue.
Blue who?
Why are you crying?

Knock-knock.
Who's there?
Blue.
Blue who?
Blue is my favorite color.


Yes, the literal side of things shines through. Uncle Lou, famous in my family for his jokes, even did his best to get the point across when we visited at the holidays, to no avail. I think it really hit my family that Joey really is different when they couldn't get him to understand a joke. Fortunately, I bet Uncle Lou will keep trying, because it is clear that Joey understands that you are trying to make a joke, and that jokes are supposed to be funny. He just can't figure out how they work- and the faces he makes are precious.


I was in Andy's room, reading our bedtime stories, and generally trying to convince the little guy that he was, indeed, sleepy and needed to be rested for school in the morning. I had just gotten him tucked in, and snuggled in (Andy likes to be snuggled to sleep. Oh, gosh, darn. ;) ), when here comes Joey.

Joey hops into the bed, sticks his feet on my tummy, and giggles, "I defeated* you!" and leaves.

*De-feeted.
Carefully crafted for your viewing pleasure by Joeymom at 11:05 PM 1 comment: 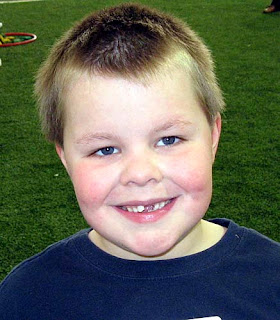 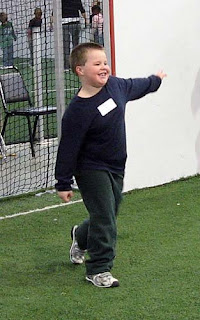 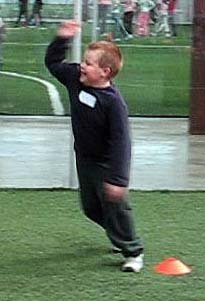 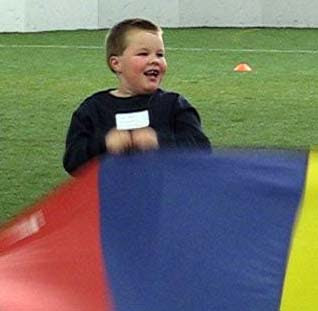 Carefully crafted for your viewing pleasure by Joeymom at 8:08 AM 1 comment: