The Hardest Half Minute

When I take pics and film of my guys, it is a rare thing to see them doing anything but being their smiling, happy little selves, being boys and doing stuff boys do. When I send out movies and slide shows of my kids, it becomes hard for some folks to believe that our lives are so divergent from normal. It spreads a sort of myth that my kids just do "more of the same".

I don't use the word "myth" lightly, as many of my students can tell you. That general misuse of the term to indicate "complete falsehood" makes properly talking about myth difficult. Myth is not false. Myth is about deeper Truth. Perhaps Truth on the Slant. An oblique view of realities, in terms that are understandable to the audience. The image I put out of Joey and Andy, that "like other kids, only more" is an oblique look at the Truth of living with my kids. But what does it mean to have "more of the same"? Does intensity make a difference?

I took footage of about 30 seconds of the start of a spiral today. Joey fell and scraped his knees, poor little guy, and the instant overload commenced. Few get to see this part of Joey, that "everything is perfect until something goes wrong; then I'm completely D.O.N.E." side. Those who do see it, see it so often, we're used to it, it just becomes par for the course, and you know what to do to mitigate and have the best chances of avoiding meltdown.

However, our new school folks have not seen it. The folks who think none of their little darlings would tease a special needs child have no clue what this looks like, or what to do; and it becomes so matter-of-course to the old crew that I think it gets overlooked. It is a part of our lives left undocumented, and I worry about it being ignored. Ignoring it can cause a whole host of problems; not having safeguards in place to deal with the unexpected spiral means meltdowns are on the way. Meltdowns are scary- for Joey as well for anyone around him. They are also avoidable, if you know what you doing and how to diffuse a situation (which is hard enough to do when you are prepared and keeping it mind!) I'd say, prepared, you have about an 80-90% chance of averting meltdown. Unprepared? Eep.

So I took about 30 seconds of footage of the beginnings of a spiral. I didn't catch the first initial shock and scream from the actual fall. I started with him hugging on his Dad and getting hugged, and yet things were still not right. He was D.O.N.E. It goes up to when he decides "I'm leaving now" (and says so), and I have to stop filming to go catch him. We didn't melt, and I'll probably never get footage of a melt. I'm too busy trying to help him to be filming something like that. But this was enough to see the storm clouds brewing. Hopefully dark clouds on the horizon are enough to indicate the strength of a potential storm.

Watching those 30 seconds was hard. I look over the clips, and erase ones that are better tossed to oblivion- unfortunate angles, bad focus, accidental exposures, that sort of thing. I also wanted to get an idea of what I had captured, because to be honest, I was paying more attention to Joey than to the camera, even though it was in my hand; those little markers that say "I'm about to melt!" are important to catch. I think it is important to get across to the school what skills we need worked on and able to generalize to home, and the potential issues over things we consider insignificant. It is also important to document the issue so we can measure improvements- or track regressions. I'm nervous about next year in a big way. The questions asked by the new teachers at the IEP made plain how unprepared they are.

It is all the harder to watch because we are through the early spring regressions, and have made our leap forward. Joey helped his Grandma make her bed- mattress cover and all. He is better able to locate objects in a room, even bringing things from one room to another. He is improving in his ability to control himself and cope. His language use is looking up. His attitudes are generally improving. He's doing so well. It makes the harder moments that much harder to witness, and to get others to understand. We've come so far, and yet have so far to go; we can't get stuck in a rut in the middle. Not now.
Carefully crafted for your viewing pleasure by Joeymom at 11:46 PM 2 comments:

At the Park, Part II

After school, it was such a lovely day, we just had to wander over to the park for some serious playtime. There were some families we knew already there, so that was exciting, and I stood around with a bunch of other moms while our kids ran wild over slide and swing.

Its always a little odd to be in a group of "regular" moms. This particular group is very interesting, because the women are all so different, and here we are tossed together because our kids run in the same age cloud. One mom is a powerhouse who has her kids in Montessori schools. One is a health nut from South Africa who doesn't believe in vaccinating her child because she thinks it is "more natural" for her child to simply get diseases (but she's doing something right- her child is an absolute wonder). One is a hippie-type laid-back mom who doesn't say much, but hears much. The other is a very strict mom who doesn't seem to think her kids ought to get dirty... at a playground... One of them works, the others are all stay-at-home (though I suspect the quiet one is actually a work-at-home). The variety of life experience always makes for interesting insights and ideas bouncing about.

Then there is the odd part. The topics of conversation are odd to me. Working mom had a job interview, hoping her job goes full-time permanent, because she is in the process of a divorce. There was talk about working and giving up work. Having just had an interview myself, we managed to have some common ground there. Then there is the discussions of school activities. Since we have speech on Tuesdays, and the after-school programs require that you attend all sessions, we can't participate in them. Then there was the discussion of packing lunches. This was an extensive conversation about a fancy lunchbox that is divided into a lot of little sections, so you can provide a variety of foods, "not just a sandwich and carrots!" The swapping of lunch ideas was mind-bending. Do 8-year-olds really eat sushi and hummus? Does cous-cous keep well in a lunchbox? We're a bit of a sandwich, carrots, and fruit family. I'm not very creative with the lunch thing. Maybe I ought to be. Then the topic of movies and TV... I hate that one. I have never seen Titanic. I have seen exactly one scene of Desperate Housewives, and that is because Marlee Matlin is in it. And it didn't make me want to see the show. On the flip side, these ladies have never heard of Buckaroo Bonzai or Ground Force. They apparently have a book club, but I had never heard of the book.

No one talking about IEPs. Nothing about teachers, services, therapies, or odd behaviors. They let their kids run without even turning their heads to check them. A group of slightly older boys came straggling through, boys that have given Joey a hard time before, and I quickly clicked into watchfulness, and had to intervene. The other moms gave me a Look. There isn't a good way to explain that your kid was about to be seriously abused, and the words you heard suggested the abuse might go physical, and you had to do something because your kid doesn't understand to just walk away, doesn't understand that what was being said to him in that tone was intended maliciously. Also, how can you explain that your child is a little off-kilter because you are not sitting in your usual spot, even though you are in full and clear view?

The little group broke up, probably due to the time rather than my intervention in "playground politics". There were goodbyes and exchanging of new cell numbers amongst them, pleasantries. I'm perfectly welcome among them, but definitely different. I have very limited ground to share. I've spent my life that way, so it is nothing new, but it always feels odd.
Carefully crafted for your viewing pleasure by Joeymom at 10:09 PM No comments: 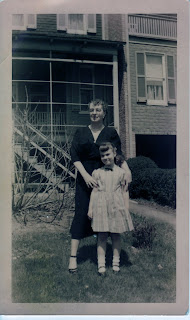 Thank you for being a great Mom and an awesome Grandma!!!
Carefully crafted for your viewing pleasure by Joeymom at 3:38 PM No comments: