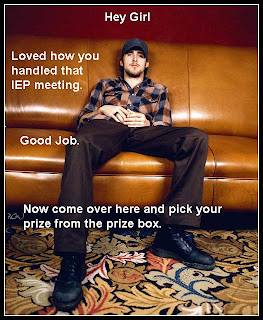 See more of Mr. Gosling supporting his special needs friends at Extreme Parenthood!
Carefully crafted for your viewing pleasure by Joeymom at 12:12 AM 11 comments: 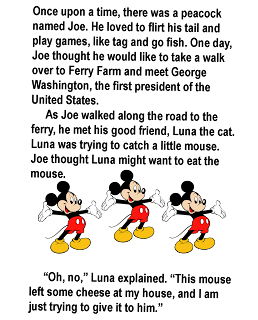 So we had our meeting with the vision folks. My best summation of our discoveries is, holy crap, no wonder he hates school. They keep telling him to do stuff he can't see!

To give you an approximation, from the experience I was presented at our meeting, I have created the image below. Now, this is a still image. Andy's eyes move, just as your probably do, as he tries to focus and re-focus. So on top of this shattered and doubling effect, image the image is constantly moving, slightly at the outside, downright swirmy-wormy in the center, and you'll get just a glimpse at how Andy sees his schoolwork, or that page you are trying to force him to read. 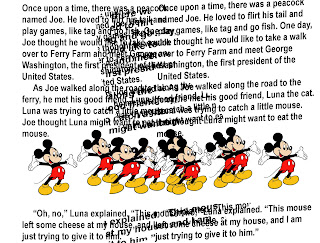 Got a headache? He gets them, a lot. And now we are very, very sure why. Vision therapy, here we come.
Carefully crafted for your viewing pleasure by Joeymom at 9:40 PM 2 comments:

When Ignorance is Deadly

I know, you wanted a nice, happy post today. You ain't gettin' one. Sorry.

I've been following the information about George Hodgins, a 22-year-old man who was murdered by his mother last week. George Hodgins was autistic.

I have been struck by the comments that follow many of the news items. Not just the outpouring of sympathy for Elizabeth Hodgins, but the complete lack of sympathy for George Hodgins. The blaming of "lack of service" and the call for family support may seem a natural reaction to many people- indeed, it must, as many of the comments steer in that direction; but is it really the appropriate reaction? What about talking about support for autistic people? For people in general? What about the support for the victim in this case? And folks, the victim is not George Hodgins' mother. The victim here was primarily GEORGE HODGINS.

When I see comments like, "well, all parents of kids with autism think about killing them," the magma rises before my eyes. I mean, seriously? Holy crap. I have never thought of killing Joey. Never. When such comments are followed up with "Any parent telling you differently is lying," I do think of violence. Not against my son.

But you know who I worry about first? No my Joey, who even now is gaining skills in self-advocacy, who is able to speak up in his own way. By the time he leaves school, I have solid grounds to hope he will be able to self-advocate effectively and live independently.

I think of Max and Charlie and Jack, the boys of my best friend who cannot speak for themselves. I am convinced that there is more going on in those heads than anyone gives those boys credit for, and primarily because they cannot speak. They are boys who are severely disabled. They may never work jobs, they may never talk; but does that mean they have no value? Sadly, to many people, they believe these boys have no value. Of course, they have also never met Max, Charlie, or Jack, or anyone like them- or if they have, they dismissed those people out-of-hand, instead of taking the time and effort to know them and let them work the magic of changing their lives and creating the understanding that is their value, the way they give back to our society- with infectious smiles, personality, and a real understanding of what it means to be human.

Max, Charlie, and Jack are people. Just like you. Just like me. We may be vastly different in many, many, ways, but in this we are in common: we are all human. We are all people. These lives have intrinsic value in the miracle of existing. Until you meet them, with an understanding that they are people- reall, full-fledged, absolutely whole people- you cannot fully appreciate their value, because our society is so convinced that they have none. They spread that idea to the very base of our youth and experience. Shake it off.

I will not speak for my friend directly, but I strongly suspect she has never thought of murdering them, no matter how "high maintenance", "low functioning", or "easily irritated" her boys might be.

George Hodgins died because his mother valued his life so little, saw it only through the desperation of not giving him full value of being a person. He had been out of his program for around three months, and the program had adult service available. This is not a story of lack of services. This is a story of a young man whose life was cut short, and stolen from him. No excuse, no justification, nothing that we can design or imagine to justify her action in killing her son can change this fact, that she chose to murder another human being, a life of value, and rob us all of that life, and rob George Hodgins of his life. He was a loved, cherished young man, with friends and family who loved him and valued him, he was a young man who loved and cherished and thought and breathed and lived, and now he is gone.

Autism is not happening to me. Yes, my life is not what I planned, and I gave up certain paths and dreams to help Joey and to help Andy in ways that people with typical children simply cannot fathom. I have a different life, different plans, different dreams. Seriously, what life goes as planned? And though I think about the lack of services and supports, the problem is not that there is lack of services and supports for me, there is a lack of these things for Joey. I want his life to be as happy and fulfilling and joyful as it can be, with the opportunities to enjoy living that other people have. I'm a parent, after all. I might have to fight harder for it, and get less sleep along the way, and maybe my working life isn't typical, but that's life. I have never thought of stealing it from Joey. To insist I have is a really stupid thing to say- a hateful thing to say.

I wish there was some way to get through thick skulls that this news is terribly painful, and it is painful enough without people saying stupid, hateful things. We have a family out in California in pain. They have lost two family members in a sudden and senseless way. Two people are gone, for really no reason at all. IF you want to make it a discussion, let's talk about the issues of services for disabled people, for support of people with disabilities, and the idea of valuing them as human beings, and the sad fact that all too often, society dismisses people with disabilities as being not-people, or half-people, instead of just people. Let's be working to change that, so fewer people like George Hodgins will have their lives stolen from them.
Carefully crafted for your viewing pleasure by Joeymom at 9:45 AM 3 comments: