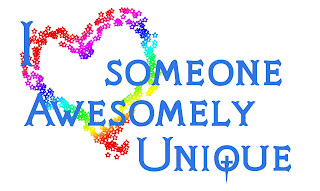 Check out the new designs at my Cafepress Shop!
Carefully crafted for your viewing pleasure by Joeymom at 11:21 PM No comments:

Attack of the Blue Bunny 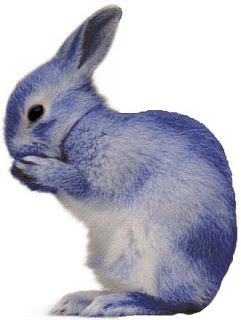 Guess who's coming for another visit?

We've been losing an awful lot of teeth around here. Joey has asked for a teddy bear. No clue why, but I am sure the Tooth Fairy will find him a good one.

Carefully crafted for your viewing pleasure by Joeymom at 7:24 PM 1 comment:

Andy has returned triumphantly to the bus in the morning. He still complains of the noise, but he's happy to be on there. We have four at our stop for this bus: Andy, JJ, G, and C. They have become a little friendship knot, with varying enthusiasm from each of them but they sit together, and ride the morning bus together, and it is awesome.

Andy is the only boy in this group. This is about to be important information.

See the title? Well, it turns out there is another little posse on the bus. It is three boys, and I don't know all the names, so we'll just call them Bossman, Thing1, and Thing2. Andy told me about them Thursday evening. They sometimes sit in his seat when they aren't supposed to. The sometimes push against him when they go down the aisle. Sounded like rough kids to me, and I suggested telling the bus driver. Andy said he had.

He was more upset Friday morning. He didn't want to go to school, or get on the bus. But off he went. I decided to have a longer discussion when he came home. And so, Friday, evening, we had a long talk about the bus. Bossman was mean. Thing1 was the pushy one, Thing2 a little less energetic but definitely in the group. They were bugging him, they were bugging his friends, and they were definitely calling D (Joey's friend) nasty names. The bus driver had done nothing, so he was telling me. I decided- and told him so- that it was time to tell other adults, such as his teachers.

I sat with him until he was asleep, then I swung into action. I emailed Joey's teachers, since D is in Joey's classes, and told them. I told D's mom. I shot off emails to Andy's teachers, and asked them to forward these concerns on to whomever they felt they needed to forward them to.

Monday morning dawned. Andy complained about going to school and riding the bus.

"You know," I told Andy as he ate his breakfast, "you don't have to get on the bus if you don't want to. At least, until we get this bully thing cleared up."

"Oh, no!" Andy's eyes got wide. "If I don't get on the bus, who will protect JJ? And I gotta be there to help G and C!" Knowing these young ladies, I was both concerned and amused. Chivalry is apparently not dead. However, G ad C were definitely a tough little team, and kids rough enough to try to target them were definitely trouble. And likely to meet trouble, in the form of G and C.

JJ is a different story. She's more likely not to realize there is a problem. She's a roll-with-the-punches type of laid-back kid, partly because she's been raised with a brother with is also ASD. That can teach you to roll with a lot of punches. She's also Joey's age- two years older than Andy. You know, I might be in a lot of trouble in a few years...

Anyway, when they got on the bus, I huddled up the parents and informed them of what Andy had told me, and what actions I had taken, so folks wouldn't be broad-sided. Bus bullying is something that often goes unreported in Kid World, as it is often accepted as a norm. Everyone agreed to talk to their kids and find out what was going on.

But my emails quickly made the rounds. They were sent up to the Vice Principal, who forwarded them on the Principal. Everyone on the bus was interviewed. I received a series of emails as steps were taken, information gathered, and conclusions met. Bossman was a known problem, and all three would have immediate consequences. Sounds good, doesn't it? We will see how it plays out.

In the meantime, I got the skinny from the other parents, who had spoken to their kids. It was worse than I thought. Apparently, this trio was stealing items from kids, including JJ. Andy was getting them back, especially for JJ. They were saying nasty things about any kid who was "different" and forcing kids to do and say things that were inappropriate. They were especially hard on anyone they thought was "gay." They pulled JJ's hair, too. They had been moved to the front of the bus, to no avail. And that was what the kids would talk about.

I am so proud of my Andy, who stood up to these bullies and insisted on helping his friends. I am proud that he took a stand and told and adult. And when that adult's interventions were unsuccessful, he came to me. Tell your own kids to stand up against bullying. Tell an adult. And if nothing happens, tell another. And another. And another... until someone steps in and does something. Don't back down, and don't give up or give in.

We love you.
Carefully crafted for your viewing pleasure by Joeymom at 9:24 PM 1 comment: