You may have noticed we've been having a lot of dips in the roller-coaster lately. In fact, the past three years of Joey's schooling have not been the rosy, well-progessing days of the three years before that. Even with teacher we think are excellent in the last two years, we have lost ground.

It really struck home the other day, when his current Awesome Teacher, Ms. F, was praising gained ground. Joey is now independently walking from the bus to his classroom in the morning. Woo-hoo! Independence! Yay!

I haven't said anything yet. I need to chew on that some. We're just now getting back to some of the independence he had in second grade. Some. Not all.

Yes, we have had some skills move forward. And he's grown up some. Not at the pace of his peers, but some. And yet, there are still these moments, whole days, whole weeks, when I feel like we're trying to regain lost ground. We had it. Then we lost it.


This fall, we may have the opportunity to get Joey into a new school- one that seems designed just for him. Academics in the morning, tailored to the child's skills (so if Joey wants to go gangbusters in math, he can! and if he needs help in reading, he can get that, too!). Afternoons dedicated to movement, therapies, and specialized education (social skills, extra speech and language work, fine motor work, etc). Movement and sensory breaks throughout the day. Classrooms of 5 students, with one teacher and two paras. Plus full-day OT, speech, and vision therapists on site (and perhaps PT, depending on who the students are). All of these people would be trained not only in special education, and not just in autism, but specifically in Joey.

But here are the cons.

We've been lucky to be in a small school system, and many of Joey's classmates have gotten used to him. They know him. They can at least tolerate his quirks, even if it is more in a mother-hen fashion than a friend fashion. Interaction with non-disabled peers would plummet, restricted to activities I could arrange after school.

I have an answer for this one, though. We are entering middle school. Much of that tolerance is about to evaporate in the world of the selfish, nasty pre-teen hormone rush. We are already seeing bullying and nastiness; it is about to get serious. This may be the time to rethink inclusion, which is already looking shaky. It is no longer a safe space for Joey to learn to interact with non-disabled peers, or for them to learn to interact with him. It is about to become even less so. This may be the moment to go ahead and give him more controlled environments to practice the skills he is being taught, and spend more energy on carefully controlling the "on the job" interactions he has to deal with- after all, it isn't just his classmates that are about to hit Hormone Central.

The other con is the price tag. At $40K/year (which is a bargain, by the way), we have to put together the data that supports our observations: that as we move away from the model we were using, and that the new school will use(with morning academics and afternoon pragmatics and highly trained staff on site at all times), Joey's ability to access both his academic and his functional curricula plummets. When he is in those reg-ed math classes, he's supposed to be being instructed how to function in those classes; yet it seems that the school's idea is to just toss him in there and hope he "picks it up." He needs a lifeguard to help him practice his social skills, but his para is green from school and untrained. And note how little I just said about learning math. We've seen his reading go from being at "above 6th grade level" in second grade to "below basic" in fourth. No one seems to be able to even tell me what progress he's made in reading. I've seen none. In fact, I've seen major regression- he won't read for me. He is again tolerating me reading in the room, but is not paying any attention to what I am saying/reading.

I worry that putting this down in black and white will somehow be considered a reflection of the teachers he has. What I feel is that we do have the A-team; these are the best teachers this school has to offer. And here we are, even doing our best and working our hardest. This isn't working for Joey. He's falling behind more and more, even as he moves forward, because everyone else is not only ahead of him, but they are moving faster. Yet his strengths get tossed to the wayside and left to stagnate, unchallenged or minimally challenged. He already passed the end-of-year test for this grade- two years ago. Has he moved forward at all?

So it is time to start gearing up for battle. This is going to be a tough, nasty one, which could be all for naught if we can't 14 others to win the battle, too. 15 students are needed to open. What a disaster it would prove if I can prove the schools are failing, yet have no where for him to go. Burned bridges are tough to recross.

Carefully crafted for your viewing pleasure by Joeymom at 12:03 AM 5 comments:

Things I wish people would think about before opening their mouths (or keyboards).

1. You can't just walk up to your family doctor, say, "I think my kid has XYZ", and walk out with a diagnosis. This is true of the flu, of a broken bone, or even an ear infection. It is also true of diagnoses such as autism and ADHD.

2. You can't just walk into a school and demand your child have an IEP, and walk away with one. even when something is wrong, it can be very difficult to get the school to acknowledge that it has an impact on your child's education.

3. Just because you have a diagnosis does not automatically qualify you for an IEP.

4. Not all children with autism or ADHD take medications.

7. Not all kids with autism get a government check.

8. Kids with disabilities have the same rights to life, liberty, and happiness as everybody else. In this country, that includes education- even if you think they are "uneducate-able". They are still human beings, and they are still members of your community.

9. Using foul language and ugly words just emphasizes that you are a mean, ignorant, ugly person.

10. Saying/typing any of the above, and then justifying it by saying you work with special needs kids of any kind, have a medical degree of any kind, or have an educational degree or experience of any kind, also emphasizes that you are mean and ignorant. It also makes me want to track down who you are, to make sure your degrees and licenses are reviewed, and to be sure you do not really work in direct contact with any vulnerable population of any kind.

Because, seriously? Mean people suck. I wish we could put them in a nice social skills class, so they would have a chance to become constructive and positive members of society, rather than blood- and soul-sucking leeches.
Carefully crafted for your viewing pleasure by Joeymom at 12:31 AM 9 comments:

Joy to the World 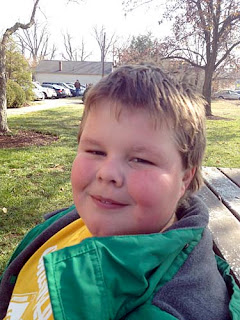 Joey and I went to the holiday parade! We get there a bit early to get a good parking spot, and hang out to see what is new for the holidays. There was also a craft fair nearby, so we wandered over there for a while. It was in my old elementary school, so I got to show him where I had classes and things. I hadn't been in the building in eons, so that was kind of surreal, but it was just as I remembered it. 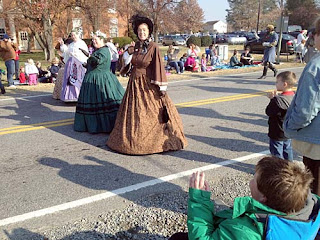 This year's theme was something about tropical or Hawaiian Christmas, which is really weird, too, since we aren't tropical. And I hate tropical theme Christmas stuff. The point of a parade is to get us into the spirit, and it is cold here, so having people wear hula costumes and put up palm trees- it just doesn't do it. Fortunately, there were plenty of non-float stuff to see. 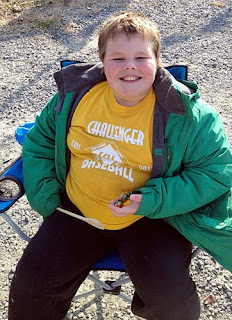 The other weird thing they do now is have all the high school bands just combine whomever wants to march in the parade into one band- so there is only one band. It is a shame, because parade bands are awesome. Also, hey, we pay for their uniforms and stuff, and it is a marching band, so come march. We all marched separately when I was young, and it was part of the deal of being in the marching band. Buy long underwear and know you are going to be in the band. We also memorized our music. And though we only had 28 horns at my school, we still rocked, even in parades. 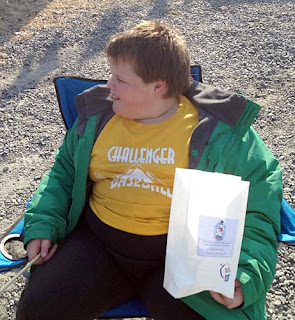 About halfway through, he started singing Christmas carols at the top of his lungs. He even got some of the younger ones around him to join in to Jingle Bells. His favorite, however, is Joy to the World.

As in, Jeremiah was a bullfrog.

Everyone around us was in hysterics. That's my boy. 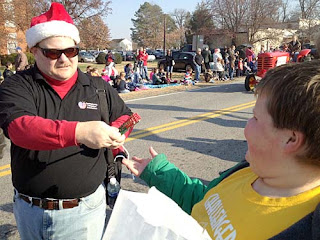 He did manage to catch some candy, but it was the folks giving out pencils that really made him grin. I think if I filled his stocking with sticks, he would be the happiest kid on earth. Pencils make great sticks.

I also liked the folks who were giving out paper bags they had decorated- so kids could have a bag for their candy and pencils. 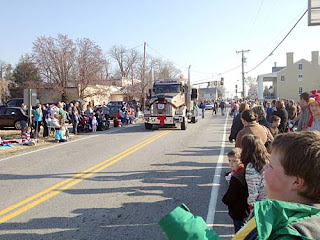 One had to love parades, especially since Joey loves them, too. He was a little more reluctant this year, with the call of the Wii, but having some 1:1 MomTime turned out to be not such a bad thing, after all. Especially when Mom plays Pier Pressure while waiting for the next part of the parade to go by. And sings with you. 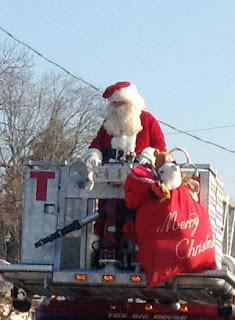 Carefully crafted for your viewing pleasure by Joeymom at 10:47 AM No comments: