Empathy. It is one of the markers people use in judging others. Does this person empathize with me? And how do I know?

Did you know that those cues for knowing how others feel, and whether they are empathizing with you or not, is culturally and socially determined? It is not totally universal? That the way we express emotion- or fail to express it- is also cultural?

Joey's teachers are very concerned right now about his ability to empathize. The reason is that when he is reading a book or looking at a picture, he cannot seem to communicate how the character in the book or picture feels. When asked, he often tells the teacher how he himself feels, regardless of the story or the picture.

For example, Joey was reading about Nathan Hale, and they got to the end of the story- you know, when he is hanged by the British. They story was pretty matter-of-fact: he is taken to the gallows, regrets having one life to give for his country, and is hanged. There was an accompanying picture showing him with the rope around his neck. The teacher asked him how Nathan Hale felt.

According to the teacher, this was the wrong answer, and that Joey said "happy" because Joey was happy, because reading was almost over, and so was the book.

I have another theory.

See, the problem is that Joey not only has empathy- he understands how people around him are feeling, and understands they might be feeling something different from what he himself is feeling- he also has the next step, compassion. When someone else is hurting, Joey gets upset. With a scraped knee, he knows what to do: go give the person a hug and ask if they are ok, and say comforting things. If that hurt is something more subtle, he has no idea what to do. The teacher is upset- I don't know why- what do I do? So his reaction can be unexpected.

How can he have empathy for people around him, yet seem unable to communicate empathy towards characters in books and pictures?

Well, how do we tell how a character is feeling? Perhaps we think about the details of the story, what we have read, and know that those things would make us feel a certain way if they happened to us. We look at the face of the person in the picture, or the way they are shown holding their bodies. We pick up on cues we have been taught to look for- scrunching eyebrows, smiles or grimaces, a look in the eyes.

We know many autistic people have trouble picking up on these cues. So how can they have empathy?

Did you see how those two sentences didn't go together? What does "pick up on cues" have logically to do with "having empathy"? Logically, there is a problem there: picking up on cues does not cause you to have empathy or not. They are two separate things entirely.

Joey is picking up on cues of some kind- he knows how people around him are feeling. Sometimes he is even hyper-sensitive to how others are feeling, and it overwhelms him- especially if he does not know how to react to those emotions or those people. My theory is that he is picking up on different cues than the ones we expect: ones that don't translate well into words and pictures. A still picture doesn't have a cue he uses to determine how the person is feeling. A simple set of sequential facts to relate it back to an experience he has never had (Joey has never been executed for being a spy, for example) is meaningless to him in determining how another is feeling.

But he has just been asked a question about feelings, and he knows- he has been hard-trained- that he must answer. So he gives the questioner an answer- the one that pops into his head as ready and relevant would be his own feeling.

Though with Nathan Hale, I am a little dubious. After all, the man just said he regretted he had only one life to give for his country- the logical leap that he might be happy about being executed is not a terribly gaping one for a third grader to make. I've had college students do worse.
Carefully crafted for your viewing pleasure by Joeymom at 7:16 PM 6 comments:

While we are in the confessional here, I have a real shocker for people who know me:

I far prefer doing other things.

Reading is a tool- and excellent for gaining new information about all sorts of topics, for discovering new stories and new lines of thought. But I don't like it. That may seem really strange when I spend my life in academia, where reading is an absolute necessity. It probably seems strange to people who know that when I am disturbed in the middle of a book, I can be quite snappish and grumpy. I was up until 2 this morning reading a story I love.

Reading is an overwhelming experience. The pull of words and scenes and characters becomes a sensory overload. Tearing away from a book to come back to this world is like being shoved from a movie theater into the bright sunlight, when you are still processing and thinking about the movie. Ouch.

If they published good, interesting books as audio books- not just junk fiction and "nonfiction"- I would love it. I am very much an auditory or aural learner, not really a visual one. But from what I have read about auditory learners, I don't fit those descriptions. I keep reading (I didn't say I don't read, I said I don't care for it and I would prefer to do other things) that auditory learners think in words, are bad at math and good at foreign languages, and have trouble visualizing things. I probably do think in words, but creating pictures is not a problem, either. I stink at foreign language, but rock at math. I remember things better if I hear them rather than having to deal with words. Letters and words can get very jumbled on a page and overwhelming, and I have to stop and read it again, making it take longer.

I purchased a copy of Ivanhoe in mp3 because I had always wanted to read it. It was like having a whole new world, to be able to listen to the book instead of fighting with print. And besides, have you ever read Ivanhoe? Awesome.

I have been thinking about this more because Joey is so very visual, and yet seems to dislike reading. He sometimes says it hurts. I wonder if he means it is overwhelming. Perhaps he becomes engulfed as I do, though I have never seen him be engulfed in a book exactly in the way I get engulfed in a book and can't stop until I reach the end (even in books I have read many times before- did I mention I was up until 2 am?) Perhaps the letters jumble up, or make other kinds of patterns for him, and remembering they are words is something that requires more energy for him. Perhaps he is expected to read too quickly, and needs a lot more processing time to really understand what he is reading, just like me. And perhaps it is a totally different issue than anything I can right now picture or understand.

Trying to get Joey to understand that reading is a tool that provides him with information is has been a challenge. I think once he really understands what words and reading can do for him, he'll be happier. I wish I knew what the obstacle was, so i could help him get through it to the other side.

P.S.- Joey reads beautifully, when you can get him to do it. So it isn't an issue of ability.
Carefully crafted for your viewing pleasure by Joeymom at 8:13 AM 4 comments:

I wish I could never hear these words again:


That is all.
Carefully crafted for your viewing pleasure by Joeymom at 7:53 PM 4 comments: 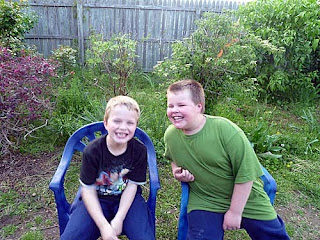 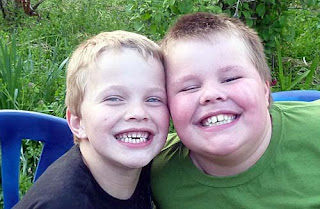 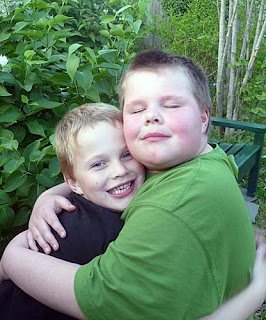 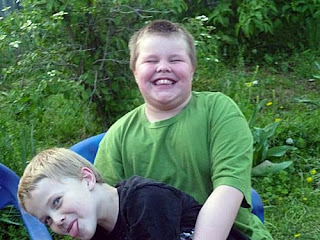 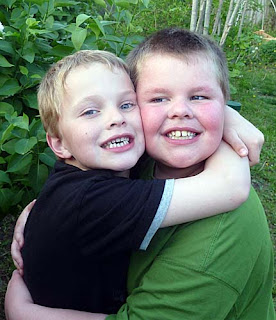 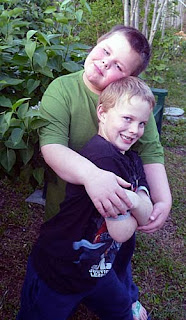 Carefully crafted for your viewing pleasure by Joeymom at 8:20 AM No comments:

Andy is starting to do an odd thing, and I was wondering if anyone else has seen or heard this in the elementary school set.

He echoes the last one or two words he says under his breath.

So a conversation with him goes kind of like this (regular type in regular voice, italics whispered):

Hi, Andy, how was school today?
Good. Good.
What did you play with Kylie today at recess?
Oh! The blue thing was big and we slashed it and I won, because red is for bad guys. Bad guys.
Can you put these ninjas away for me? They are all over the floor and I'm worried someone might step on them.
I want to play Wii! I have homework (starts picking up the ninja figures). is there soccer tonight? Is Joey home yet? Home yet.
No, Joey isn't home yet. Let's see what your homework is. Where is your bag?
I don't know. Know.


You get the picture. Sometimes it isn't every sentence or conversation turn, but usually it is. Anybody else have a little one doing this? Especially one who isn't autistic?
Carefully crafted for your viewing pleasure by Joeymom at 12:04 AM 6 comments: