All quiet on the holiday front

As we embark upon the Holiday Season, I am glad to report that we are, for the most part, quiet here. Joey has had normal ups and downs, and is working well with his speech therapist, Ms. Leslie. Still no word about OT, but that's OK for now, because I am still trying to pay off their bill that I thought was paid long ago, and I still have no clue how much I still owe because of the way they bill. Andy is his usual bouncy self. We have been mitigating the bounce factor by encouraging outside play. My plan for today was to work on the back yard, but unfortunately, I am in the grips of a sinus yuck that I am hoping is an allergy.

Someone at school is into Spongebob Squarepants I guess, because Joey's words of the week are "Tartar sauce!" and "Barnacles!" with a smattering of, for unknown reasons, 'yucky cookie!"

Not wanting to sit outside in the cold yesterday, I surprised with them with a popcorn an movie party when they got home. It was the first afternoon in several weeks that I was not drowning in grading, lecture-writing, discussion boards, and other teaching stuff. It was nice to be caught up. It seems a shame to waste it on being sick, though. I have also begun my annual showings of A Christmas Carol when the boys are not home and I am. 'Tis the season.

So we are in the calm before the storm. Time to take a deep breath of air before we plunge in!
Carefully crafted for your viewing pleasure by Joeymom at 12:24 PM 2 comments: 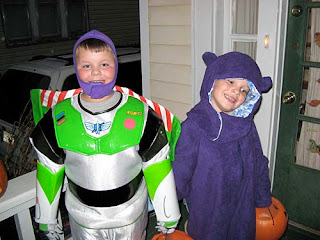 Yes, the Big Night arrived: time for Trick or Treat! A little light rain didn't hold us back. Fleece washes. So Buzz Lightyear and the Purple Chipmunk were out and about to get their share of sugary comestibles. 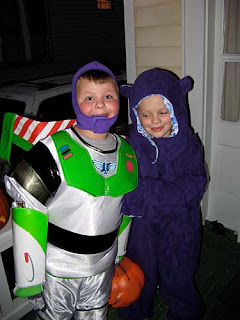 I will say the boys did a fabulous job with their jack-o-lanterns. Neither of them wanted gooey hands this year, so JoeyAndyDad and I did most of the disgorging of slime, but I then had them draw their faces on, and I carved them out just as they were. Andy preferred round eyes (he has trouble making corners still), and Joey did lots of triangles. I also recommend those little electric lights instead of candles- that way boys can play with the pumpkins even after dark. 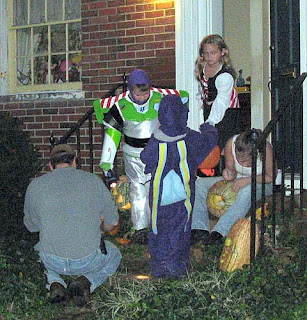 We were greeted at many doors with, "Oh! Buzz Lightyear!" which we expected, and then quizzical looks and "and... um... uh..." and Andy proudly informing his audience, "I'm a purple chipmunk!" Which we also expected. A couple folks asked me what character he was, and I had to tell them as far as I knew, this costume wasn't from a book or TV show. Andy just is into the color purple right now, and into chipmunks right now. So there you have it. 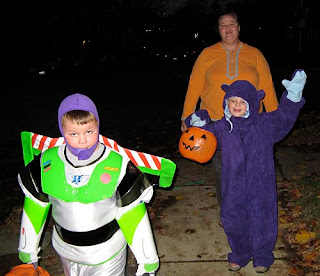 We did a lot of walking. I wandered down to my friend's house, but they weren't home. They must have figured we weren't coming because of the rain and taken their guys to the mall or something for treats. In consequence, we got a lot more candy than usual, because we hit houses all along the way. I expect to have two little guys with feet in the air and hands clutching tummies, but so far, they have been pretty good about the candy. 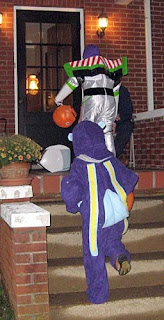 Happy Halloween, and Trick or Treat!
Carefully crafted for your viewing pleasure by Joeymom at 7:09 AM 2 comments: