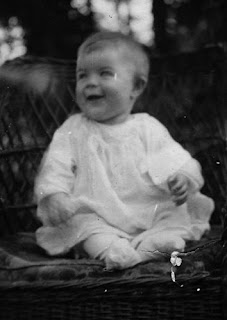 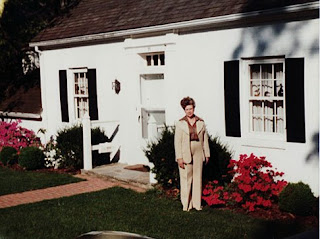 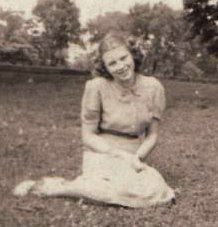 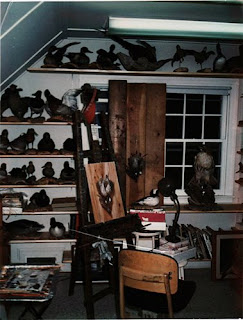 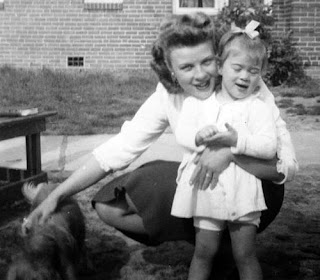 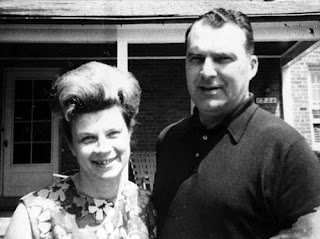 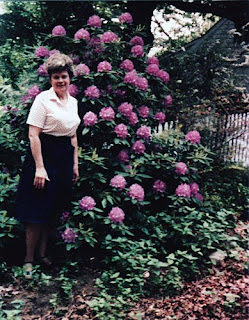 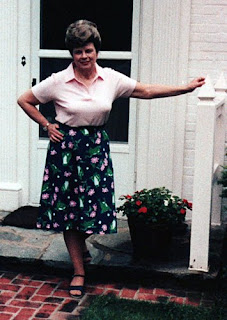 Carefully crafted for your viewing pleasure by Joeymom at 10:53 PM No comments:

Well folks, my friend has made it through the storm. She had no power, but her house only had minor wind damage. They stayed with her parents (a few streets away), so they are OK, too.

Thank you, everybody, for all those prayers and thoughts. They worked!
Carefully crafted for your viewing pleasure by Joeymom at 10:50 PM No comments:

My bestest friend and college roommate is in Houston with a husband and two small children. They are battening hatches (I tried to lure them up here for the weekend, but that didn't work- her parents are there, too).

For her, and any of you who are planning to hang tight in the path of Ike, we are praying hard here. Take care and stay safe.
Carefully crafted for your viewing pleasure by Joeymom at 12:43 AM 1 comment:

I got Joey onto the bus this morning, did a few needed chores, and went to get Andy.

When I arrived at Grandma's, they were on Grandma's bed, reading a book, and living it up. They had already had breakfast and washed up. They had talked much of the night,and had fun.

Andy had no desire to go home. Even now, as he prepares for his bath, I can hear, "Want to sleep at grandma's!"

We are planning on Joey's sleepover, coming soon. We know Joey is going to need a lot more prep than "wanna stay the night?" while sitting in Grandma's driveway. It will take more prep on mom's part to distract him when he arrives, and keep him focused on the activities they will do, and the activities need to be planned and prepped, to that he stays engaged. However, it should be fun to have him all to herself.

I suspect that once again, we won't be missed.
Carefully crafted for your viewing pleasure by Joeymom at 7:17 PM 2 comments: 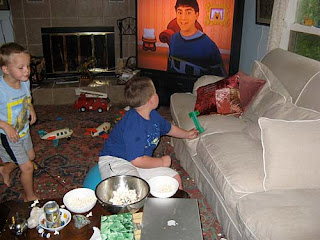 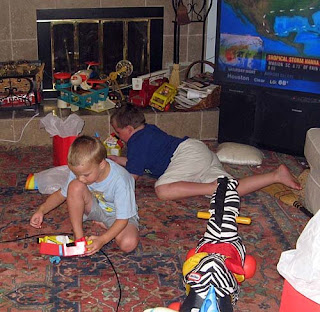 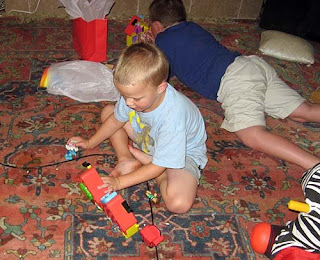 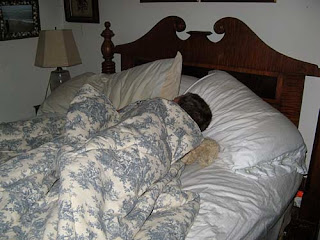 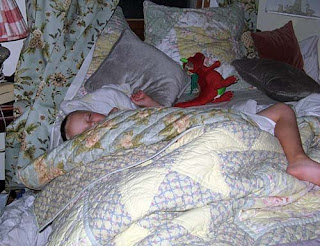 Carefully crafted for your viewing pleasure by Joeymom at 10:38 PM 2 comments:

In stories and folklore, the Witching Hour is usually the wee hours of the morning, such as Midnight. But for those of us with children, we all know that this a misinterpretation. The real Witching Hour is about 4-6 pm.

Between 4 and 6pm, no matter where we are, no matter what the day has held, my children go berserk. They're tired. They're hungry (even if they just had a snack!). They are wound up and ready to tear each other apart, while vying for undivided parental attention.

In the car? Choruses of repeated soundified cacophony, bounced back and forth, or punctuated with "DHO-WY!!!DHO-WY!!! BE QUIET! I NEED QUIET!!!!"

In the house? Stampedes of elephants rampage through the house, chasing two terrified cats, while singing "Blue's Clues" or the daily Favorite Ditty at the top of their lungs. Sometimes trucks are pushed by said elephants, exponentially increasing the noise.

In the yard? Sand is flung willy-nilly to squeals of protest and sandy bodies dashing past the parental guard into the house... where the child promptly turns into a very sandy elephant.

In the store? I avoid the store during the Witching Hour at all costs. We'll survive a single night without milk, bread, and toilet paper instead.


Any relief from the Witching Hour is infamously temporary. Nothing will eradicate it completely from a day. A method that provides relief today will not work for weeks to come. There is nothing to be done but batten down the sanity hatches and hold on tight... and enjoy the roller-coaster ride.
Carefully crafted for your viewing pleasure by Joeymom at 7:21 PM 4 comments:

We just heard about James ManyWhiteHorses. Although it is not yet known if his mother killed him because he was autistic, but he is gone. Another life lost for no apparent reason- a baby loved dearly by his aunt, who wanted to take custody of him.
Carefully crafted for your viewing pleasure by Joeymom at 6:49 PM 1 comment:

Spider on the Porch

We have a spider on our porch, and I got some cool footage of her spinning her web.


Carefully crafted for your viewing pleasure by Joeymom at 12:36 PM 2 comments:

Monday Retrospective: In Memory of Love Lost, Part One 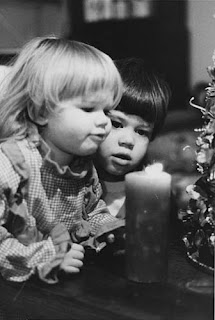 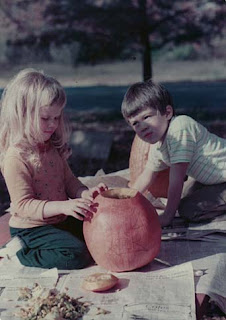 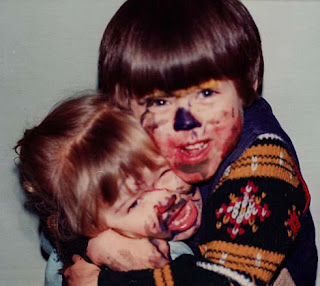 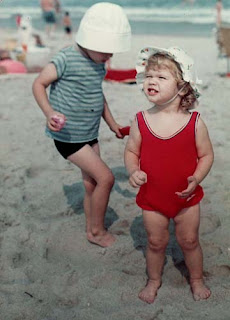 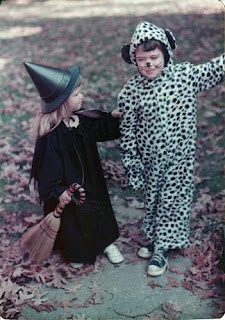 This December will mark ten years since my brother last spoke to me. I often think of all the wonderful things he is missing by not knowing my children, his nephews. We still love him.
Carefully crafted for your viewing pleasure by Joeymom at 6:32 PM 4 comments: 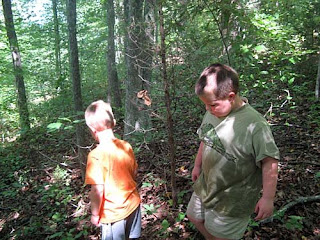 Our slumber party at Grandma's actually went really well. We had a Blue's Clues Roller-Coaster Birthday Slumber Party, with popcorn and mac and cheese and presents (they each got a Blue's Clues playset) and sleeping in Grandma's bed! We munched popcorn through Hanna, which was little more than a prolonged summer storm here. No real flooding. 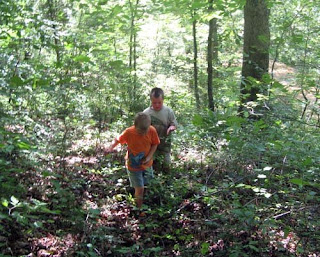 Today we wandered into the woods to see how high the river was. I grew up in these woods. There was once a well-trod path here, beaten smooth by the passing feet of myself and my brother nearly every day. Now my sons had a look at their future domain, two princes of the woods where their mom once roamed free. 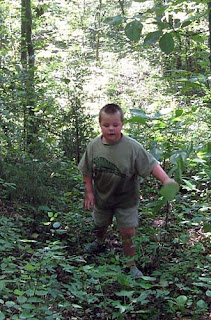 I was roaming mostly free in these woods by the age of seven, when we started building the house. I would run down the path into adventure and freedom, and return with the ringing of the ship's bell my mom and dad mounted on our porch. When you heard the bell, it was time to come home. I assure you that bell is very loud, and carries a lot farther through those woods than one might expect. 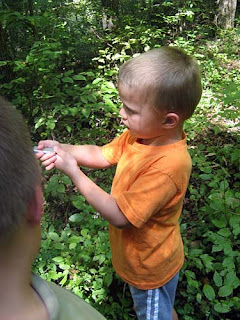 Joey is now six years old. There was a time when I thought by now we'd be spending summer afternoons with Joey wandering through these woods regularly. That has not been the case. WIll he ever roam free in these trees, in his own little kingdom? Will he learn to return with the clang of the bell? That day certainly is not yet here. I thin kit will come, but not today. 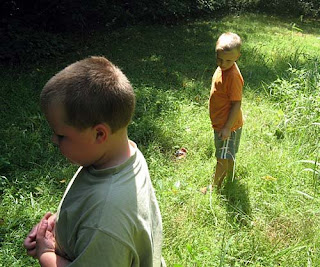 We wandered over to the garden, too, but the deer ate most everything we planted there. I am dreaming of building something of a walk-in cage for future planting, but when will I have time and resource to build such a thing? Anyway, by that time, most of what was being said were whines, as if they were allergic to the woods and outside. I think we need to take more walks together! Beat down the paths a little more! 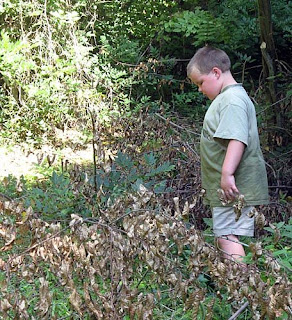 I couldn't even get Joey to look at the swollen river, or the trees, or anything. He was preoccupied with branches constantly brushing him and insects buzzing about and being tired. I may come some mornings and hack at the trees and the paths so he can get more used to being outside, being in the woods, and has some set paths he can use before he strike out to make his own. Andy was being persnickety, too, though he had more interest in the woods, like the tree we saw that had been beaver-felled, and the small yellow flowers, and looking for spider webs. He's not old enough to be wandering about unsupervised, but I still need to get him out into the woods more. I hate to see them both with forest allergy. 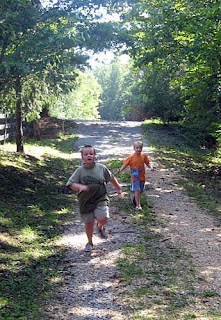 In the end, we retreated to the walking along the driveway. Joey is much more comfortable with having the set road to follow. Again, maybe if I make more paths clear, my little prince charmings will be more willing to survey their domain.
Carefully crafted for your viewing pleasure by Joeymom at 3:49 PM No comments: