A voice from my childhood was silenced today.

I remember riding in the back seat as my folks took a drive, bouncing down 522 through Woodville and Scrabble, listening to Paul Harvey. It was a voice from a golden age, lost to modern walkman-toting teens like me. He read the advertisements the same way he read the news, as if he were encouraging a friend to buy this wonderful thing. he used small details of lives to illuminate what it really meant to be an American, to value freedom and practice respect. He made you think about larger issues in human scale, and understand why integrity and self-respect were important, the larger effects of small acts of honesty, kindness, and compassion. He opened up the possibilities by showing how everyday people became extraordinary. It was more than just cold facts in a news article; there was a very human side, a lot of shades of gray, even in the most black-and-white moments. What choices would you make? Where would those small choices lead in the larger world?

You could count to a surprise ending, a twist in the tale that showed how this yarn, itself a masterpiece of values in hard work, caring for others, and doing the right thing for its own sake, was actually about a larger personality, a small moment in a life that was changing the world. Small moments became momentous. He revealed the deeper fiber of a person in a single episode from everyday living.

I wish I knew more about Paul Harvey, who revealed so much about others, and showed us exactly why they- and we- were great. I wish I had the rest of the story.

Good day.
Carefully crafted for your viewing pleasure by Joeymom at 11:01 PM 1 comment:

"Fish out of water" 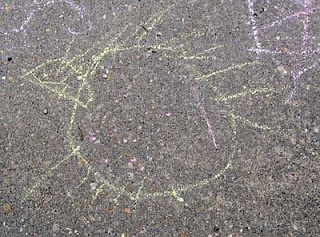 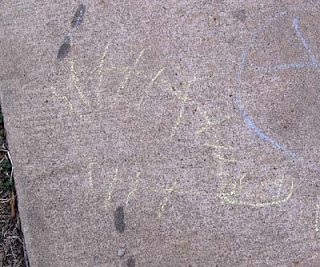 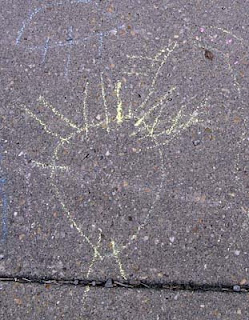 And the most fearsome of them all... "Turkey".
Carefully crafted for your viewing pleasure by Joeymom at 6:34 PM 2 comments:

The boys both got new coats for the winter. I got Joey a beautiful blue one with matching snow boots because his old coat was getting small and the lining had disappeared (and rather unusually, has yet to turn up). Andy's new coat appeared after Christmas, because his old coat, which had been Joey's old coat and going strong for 4 years and through two boys, finally gave up the ghost (washing it had no effect on the filthy look, all the velcro had been pulled off, and Andy's wrists stuck out of the sleeves). Grandma found him a lovely red one, one of those fluffy down ones. Very warm, and it would crush better to make getting him in his car seat easier.

All was well until Andy decided he didn't like coats. Specifically, he realized it was easier to get into his car seat without one, and when you aren't wearing a coat in a car seat, your back doesn't get sweaty. Also, I think the weight difference was a factor- his old coat, being one of those lovely 4-in-one coat systems (I'm not being facetious. I love those 3-in-one and 4-in-ones: buy one coat, wear it the whole year round, just wear the parts you need! Totally, totally, awesome) had some weight and thickness to it that his new coat lacks. He's happy to wear it as an actual buffer against cold, but he's figured out that the car, once warmed, is, well, warm.

And now that's been generalized. The minute he hops into the car, he's stripping off his jacket. The temperature makes no difference; even if it is freezing, he knows that in about ten minutes, the car will be warm. The fact that he'll catch his death in those ten minutes without a coat is of no interest to him in the slightest. This from the child who, up until three short months ago, insisted on having any jacket with a hood worn with the hood upon his head. Even indoors.

It also makes no difference which jacket he is now wearing. It was warmer than usual the past two days, so I pulled out the sweatshirts. I thought the weight might also encourage him to keep it on. No dice. Open door, hop in, remove jacket. It's a ritual now, ingrained into his the pathways and set on automatic. Open, hop, remove.

The teachers at his school, who have to put him in my car and strap him into his seat, find this very odd. They are busy trying to get him wrestled into the seat quickly, and he's trying to remove his jacket, which he wore for all of a half-dozen steps between the door and my car. She actually chuckled this morning, "Poor guy. If they come with a jacket, we have them wear them home; even if its just for ten seconds!" I was glad for the implication that my child isn't the only one to hit the car and strip.
Carefully crafted for your viewing pleasure by Joeymom at 11:40 PM 3 comments:

We had an interesting encounter at the playground today. A boy ran up to Joey saying "I know you!" Joey was very happy to see him, though it took Joey a minute to acknowledge him. Then Joey realized there was also another child from school whom he knew. Joey tried very hard to play with these boys. However, they were playing some kind of make-believe involving swords (maybe Star Wars?) and at some point in the play, probably because Joey couldn't follow what they were doing, they started running away from Joey whenever he approached them (had they decided to make him the villain, perhaps?) Joey became very upset that these boys kept running from him. Finally, as I was trying to intervene and get Joey to calm down, he said, "I don't like them running away from me. It hurts my feelings. I am going to go tell him."

And that is exactly what he did: "Don't run away from me. It makes me feel sad!"

I was so proud of him.

Unfortunately, the boy responded, "You can't tell me what to do!" and ran away. The two boys also kept inviting Joey to play when he gave up and tried to do other things, then running away from him, which I thought was a little odd when he had so clearly told them he didn't like that. I don't know if they meant to be upsetting to him, but I finally packed the boys up and took them home.
Carefully crafted for your viewing pleasure by Joeymom at 7:01 PM 2 comments:

What the Fly Hears In Andy's Room at Night

Once upon a time, there was a T-Rex, stomping through the woods, stomp stomp stomp stomp. He saw some bubbles in the trees, and followed them because they were so pretty. He found his good friends, Blue Lizard, Red Lizard, and Green Lizard. They were blowing bubbles and having a great time. They asked T-Rex if he wanted to blow bubbles.
"Yes, thank you!" said T-Rex, and the Lizards gave him a bubble wand and he blew bubbles. Then he found a treasure chest, right there in the middle of the woods. It probably belonged to some pirates. He opened the chest, and it was full of pirate swords.
"These probably belong to a pirate," T-Rex said. A pirate ship sailed up full of pirates. Well, there was one pirate. And T-Rex gave him the treasure chest full of pirate swords.
"Thank you!" said the pirate.
"You are welcome!" said T-Rex. They gave each other a sweet kiss, and the pirate sailed away with his treasure chest in his pirate ship.
Then T-Rex saw a dragon, flying across the sky. It was a baby dragon, and it was orange. He flew down to the ground.
"I want my mommy!" said the dragon. T-Rex helped him find his mommy. They looked all around. They went to Fox's house, but the Dragon's mommy was not there. And they went to Mouse's house, but the dragon's mommy wasn't there. And they went to spider's house, and dragon's mommy wasn't there, either. then T-Rex looked and he saw lots of dragons, and there was dragons mommy. Then were dolphins and gulls all around. And there was a mommy dolphin, and two baby dolphins, and they were dancing.
"Let's play!" said mommy dolphin. "Let's dance!" So the bay dolphins danced with their mommy. She gave them lots of kisses. They gave her lots of kisses. Then one of the dolphins hid.
"Where is the other one? " said the baby dolphin.
"I don't know," said mommy dolphin. then the other dolphin leaped out and shouted "surprise!" and surprised the mommy dolphin. And they all got kisses.
"Good night, my babies," said mommy dolphin, and she gave them kisses.
"Night night!" said the baby dolphins. "This is my bed!" said one baby dolphin. "No, it's my bed!" said the other baby dolphin. So mommy dolphin had to give them both more kisses and tuck them into bed, where they fell asleep.

The end.
Carefully crafted for your viewing pleasure by Joeymom at 10:10 PM No comments: