Last Day of Being Eight 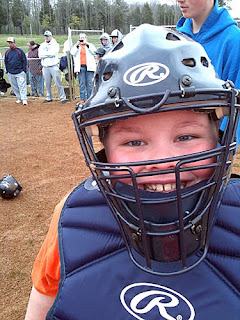 Today, he got to be the catcher for his baseball team. He was awesome. But that is no surprise to any of you, I bet.

Tonight, I try to make Angry Birds into a cake and birthday decorations.

So Joey has stood up and taken his stand.

We've been having trouble with Little Annoying Dude (LAD) for a while now. He was in Andy's class last year, and proved himself Totally Annoying to Andy. He delighted in calling Andy names that would seem innocuous to adults (Andy Apple was a favorite), but drove Andy nutso-bonko. There were other small issues, little annoyances that suggested the child simply doesn't like Andy, finds Andy's reactions funny, and isn't very nice. Once of LAD's favorite modus operandi was to act really nice to Andy for a while, and play with him, and then start in with the annoying bits.

We spent some time with Andy talking about staying away from LAD, even when LAD was pretending to be nice. Find other people to play with, tell him that he's being annoying and mean, reporting to a teacher, that sort of thing. Things seemed to be going along as normal, everyday, playground antics. You know, kids, who don't always get along sort of thing. No big deal, right?

Welcome to this year.

Andy has been doing the "I don't want to go to school" dance for a while now, with the excuse of "there's too much work!" This sounded odd to me, and he was resistant to our advice that learning was supposed to be fun and makes you smart. But this week, the tune changed; instead of being too much work, it was too much LAD.

LAD is no longer in our class, but we still see him in the cafeteria and on the bus. Far more concerning is the widening of the stakes: LAD has recruited his little friends into the game. Some of those friends are in Andy's class. And on Andy's bus. And in the cafeteria. And on the playground. And...

Its one thing when you have one kid who is annoying you. It is a whole new problem when you have a whole group of kids who pop up throughout your day pulling the same annoyances, playing with you until LAD appears and then they turn away from you, poke you in the back of the head with pencils, I could go on.

We took several steps in quick succession. We made sure Andy told the child to stop. Andy felt if he went to the bus driver, the group would make it worse, so I stepped up onto the bus and said something myself. I then emailed Andy's teacher to warn her of the issue, as well as the guidance department.

And Andy had another hard day. So the next morning, we "missed" the bus, and I marched around to the office to write a note to the guidance counselor who had worked with Andy before in all his testing. Sometimes emails end up in the spam filter here- but notes go directly into the mailbox. I made the note fairly detailed- more than I have given here- and asked for help for Andy. I was unhappy that he was being bullied in this way, and that it had gotten worse. I was unhappy that he felt he could not go to an adult at school for fear of reprisals. I was unhappy that this had apparently gone on for a fairly long time with no one at school noticing.

Bullying is hard for adult radar to pick up. Innocuous names get shrugged off. If children suddenly change playmates in mid-recess, it is shrugged off as a new game. A child who might cry out in annoyance is told to hush and not interrupt. It is easy to miss the signs, to ignore them, to sweep them aside. All of these signs point to a very serious situation for the child being bullied and trying to get through their day.

Within an hour, I had an email from the guidance counselor. When I called another hour later, she had already pulled in the teachers- for both kids- and started identifying the other children involved, and was about to start pulling them in individually for a discussion of the situation. She was planning to get on the bus and make sure the kids were broken up. The cafeteria was re-arranged to keep LAD away from Andy. As our counselor said, "This is bullying. We don't play this. If you start seeing these signs again, don't wait. Call guidance in immediately. This is exactly what guidance is paid to handle."

We'll see how Andy's day goes on Monday.
Carefully crafted for your viewing pleasure by Joeymom at 9:27 AM 3 comments:

Standing Up and Saying No

We've been having some issues with Joey this year involving new interest in showing affection- trying to kiss and hug his friends and pat them on the behind (who are, incidentally, mostly girls), etc. We have had a talk about what asking people to touch or kiss or hug them, and that girls have to say "no" to kisses in school, and what is appropriate in school versus what is appropriate at home, that sort of thing. We also talked about patting someone on the bottom or being kissed in public being possibly embarrassing to the other person. Things seemed to be going well on this front.

However, one of Joey's classmates apparently thought it was funny that Joey liked to pat people on the bottom, and worked really hard to get Joey to to this to some poor young lady today. Naturally, the girl was upset, and the whole incident was reported, and we got a call from our Vice Principal...

... to tell us how proud she is of Joey, because when this child tried to get him to smack the girl's bottom, Joey said, "No. That is not appropriate!" and refused to do it.

Joey's dignity and courage: 1.
Bully: 0.
Carefully crafted for your viewing pleasure by Joeymom at 4:36 PM 5 comments:

Well, the meeting wasn't nearly as horrible as we planned for, and we think... we think... we got the bottom line straightened out. We're futzing with the different environment possibilities for Joey to try to find ways to keep him small groups with few distractions and as much in the "main stream" as possible (where his academic needs can be better met). These changes require that he have an aide, the kind that knows when to stay in the background, and when to intervene: a "lifeguard." Understanding what we wanted was easy. Figuring out how to word it in an IEP was not.

The interesting resistance we got was about the use of sign language for visual cues. There seemed to be resistance to the use of signs from the speech therapist (how odd is that?) and resistance because "combining signs and picture cues might be confusing." We thought that odd, too. Joey is a smart little guy. He knows what he can access and use at a given moment, and he does very well with signs. It helps his speech and auditory comprehension immensely. Why would adding in using pictures for certain choices (such as what type of activity he wants for a break or what object he needs for sensory issues) to using signs as prompt (such as "listen", "wait", "ready?" etc) be confusing?

We are currently going over the IEP, because it is a lot of information and a lot of goals and a lot that could be misinterpreted by the next team, and we don't know yet who will be the teachers on that team. These teachers have had all year with him, and when they have a goal, they know what they "mean." But is this written to make it clear to the next teacher? Not sure.

Ah, IEP season. Just what everyone needs to lift their blood pressure and get the cobwebs swept from the mind.
Carefully crafted for your viewing pleasure by Joeymom at 9:15 PM 3 comments: