Yes, we had a nice, quiet Thanksgiving. We prepped. We cooked. We were uber-ready.

The boys were good, patient, and actually entertained themselves for a good chunk of time. Grandma just cleaned her basement, revealing a lovely concrete floor- perfect for chalking. I found some of JoeyAndyDad's old Star Wars figures (mine are mysteriously missing), so Andy was thrilled. We brought Joey's computer with us, making him happy. We even got them both to come in to the living room to see Santa arrive in Herald's Square! They were very excited about eating turkey and stuffing and potatoes, and Andy even had shrimp. Yummy.

The bird this year was 27 pounds. It took about 5 1/2 hours to cook. The last hour, I slapped bacon on top. Yummerific. We discovered the bacon trick a couple years ago, when I found a bacon turkey online and slapped bacon on the turkey as a joke for JoeyAndyDad. It turned out to be really super delicious. I also tried a new sweet potato casserole this year, which turned out pretty good.

Evan arrived in the early afternoon; he had to work until early in the morning. Unfortunately, he also has to work tomorrow, so he didn't get to stay over, which means we didn't get to drink and I don't have updates on all the books he's read, and the headache I sported most of the day meant we didn't get to talk much. But we all watched some football and The Empire Strikes Back. Watching a Star War movie is getting to be a tradition when Evan comes. I bet we see Return of the Jedi on Christmas. Which would be awesome. I'll be sure to grill him about his reading, too. He always reads interesting books.

The fun part was he arrived in a garbage truck. He's working for a company that picks up and hauls garbage, and he got to use the truck. Joey was thrilled to see a garbage truck up close, though we didn't have time for a ride. Maybe next time.

So, I'm thinking turkey casserole for dinner tomorrow. And the next day. And possibly the day after. It was a pretty big bird.
Carefully crafted for your viewing pleasure by Joeymom at 10:49 PM 1 comment:

I don't remember how many we're up to now. Today's joyous episode included the Director of Student Services, the Autism Coordinator, and Joey's School Principal, along with me and my mom.

We laid it out: Joey received failing test scores for the nine weeks' grading period, and is not achieving sufficient progress on any of his IEP goals. He is not receiving appropriate OT support because the OT is incompetent; she stated clearly at the last IEP meeting that there was nothing she could do for Joey, and insisted on a once-a-month consult status instead of direct service. Here we are in crisis, and where is this lady?

I think if one more admin person tells me this is the school OT, take her or leave her, I am going to shut the meeting down and call a lawyer. How much evidence do you have to have of a person not providing appropriate service to your child before you can go around and get someone in who can provide appropriate support? If you have a teacher who says "I cannot teach this child", shouldn't the school then immediately provide a different teacher, so that the child receives a free and appropriate public education? Why should it be any different for an OT? Or any school personnel?

Autism resource room for next fall? Great. What do we do until then?

Train the OT? Ok... and what do we do until she is appropriately trained, or a new one is hired?

How do you get across to people that these things needed to be done weeks ago? It is now too late to be thinking about prepping. He's here. Now. And drowning. Fast.
Carefully crafted for your viewing pleasure by Joeymom at 7:20 PM 5 comments:

Today, I am thankful for my mom.

If I am feeling sad, lonely, anxious, weird, grumpy, scared, angry, out-of-sorts, and higgledy-piggledy, I can go to my mom and feel better. She has the best hugs, the best smiles, and the comfiest shoulder. Plus, we have good taste in shopping.

If I am feeling happy, silly, joyous, excited, thrilled, proud, giggly, and bouncy, I can go to my mom and share it with her, making everything fifty times better.

And if I show up at her house utterly exhausted, she lets me take a nap.

I love you, Mom. Thanks for being my Mommy.

(I'd post a picture, but she hates having pictures of her online.)
Carefully crafted for your viewing pleasure by Joeymom at 9:52 PM No comments: 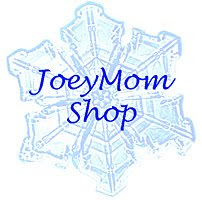 Don't forget us in your holiday shopping! The JoeyMom shop is open!
Carefully crafted for your viewing pleasure by Joeymom at 4:48 PM No comments: