"You're driving too fast, Mom. The speed limit is 45. You are going 52. Speed limits are made to keep us safe."

Joey has hit the age when he realizes that driving is cool. It lets you go places. It puts you in control. The driver's seat has always been a fascination, but now it is generalizing to the idea of growing up and gaining freedoms.

We are driving to the dump. My mom doesn't have trash collection, so Joey is with me to do a Trash Run, where he can help me with the bags (tossing them into the big compaction hopper is awesome heavy work) and watch the trash be compacted away. It's also a Ride Alone With Mom, which is a treat; he gets to sit up front with me and ride.

"I'll never drive," he says suddenly. His voice loses the mechanical quality at its edges for a moment, a pause in the general driving script to make an observation. But I know this new tone, too; and I suddenly feel that turn in my stomach that always accompanies it.

"Of course you will, Buddy," I assure him. It is the expected response, and I want him to feel the familiarity, the cheerfulness, the casual air of my response.

"No," the grief in the word could be a whole conversation, but he goes on. "My age limit is twelve and under. I will never be a teenager. I don't have a birthday."

It's a tone that makes you want to leap out of your soul and hold him, until all that pain he is expressing goes away. I have never figured out why he is sad, or why it comes out when it does.

Instead of holding to the tack and spiraling into the abyss the conversation teeters upon, I decide on something else.

"There are three basics of driving," I put in my lecture-voice, "The two pedals- this is the gas, this is the brake; and the steering wheel." He stops, his head tips to one side, he looks at my feet.

"You hit the brake. Not too hard!"

"Not necessarily," I grin, throwing in a little wrench to get him thinking. "All you have to do is stop pressing the gas pedal. See?" I take my foot off the gas, and we slow down. "You use the brake when you have to stop faster than just letting up on the gas lets you."

"I'll use both my feet to drive," he announces, still look at my feet.

"No, actually, you just use one foot," I observe, stepping on the gas for a moment to keep us moving. "When I want to stop, I just move my foot from the gas to the brake," I clarify, and demonstrate.

For a moment, he is fascinated. Then I blow his mind by showing him that after a turn, you just let the steering wheel go, you don't turn it back. He stares at my hands a moment, frowns, the script returning.

"Well, that's one thing you will have to learn about driving," I sigh. "Sometimes the rules bend. I know how to drive this road. If you are out on the Interstate, the speed limit is 65. But if everyone around you is going 70, you don't want to be a traffic hazard- you need to go 70, too."

This totally Does Not Compute.

"But the speed limit is the rule," he spits out in dismay, a phrase I have never heard him use before. In the face of the idea of rules that bend, but not break, I glimpse the black-and-white thinking that dominates Joey's world, in a way and with an intensity I have never really seen before. Perhaps as he gets older, he is expected to understand more about shades of grey, and so it is now more obvious.

My stomach lurches. My eyes burn. I show him turning the wheel again. He is distracted again. Now he chats merrily about owning a truck when he grows up, so he can "haul my things easier."

And I search for my heart in the fog of grey.
Carefully crafted for your viewing pleasure by Joeymom at 7:27 PM 3 comments: 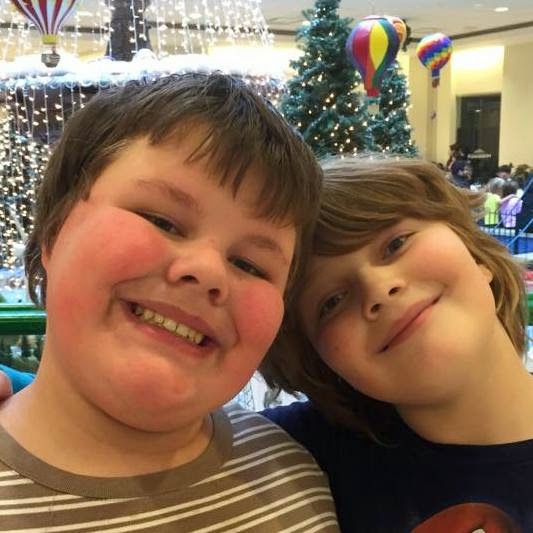 Sending you all hugs and great thoughts, and hopes for a fabulous year ahead!
Carefully crafted for your viewing pleasure by Joeymom at 1:15 AM No comments: