My Mighty Little Man. With guest appearance by Stimey.
Carefully crafted for your viewing pleasure by Joeymom at 9:42 PM 4 comments:

Small Doings of a Weekend: Being Andy's Mom 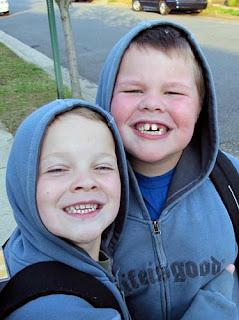 With all the exciting things happening and moving and shaking in the world, and a blog called "Life with Joey", my writing often overlooks the other half of the world, that veritable bundle of giggles and bounce we named Andy. Joey had an IEP and a baseball game and a lost tooth and lots of things going on, but Andy has lots going on, too.

When I made my first blog, eons ago and now long gone, I took the name Joeymom, because there was no Andy. That's how long ago it was. It becomes second nature to answer to it, as often in store or school or sports event field, the call of, "Hey, Joey's Mom!" means me. So it was kind of odd but lovely to have an event this weekend in which I was "Andy's Mom." 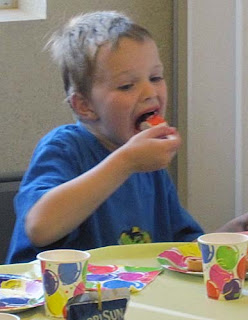 Andy was invited to a birthday party. This is a regular occurrence with Andy, at least more so than with Joey. I'm always amazed by the awesome parties people give for their kids. We had one at Toddlin' Time quite a few years back, and it was awesome. But this one? Holy Cow. This was at a place called the Paragon, and its a gymnastics center. I didn't get a lot of good photos, though I got some fab film I might get together for you, because it was dark and the kids moved constantly for about, oh, two hours. Constantly. On trampolines. This was definitely Andy's kind of party. It was so great, Andy actually ate the pizza- crust and all- and the cake, not just the icing! How awesome is that?

What was really hilarious was that this party was for Andy's good friend K. K is a little girl, and we realized they were in Andy's first preschool class together- and she adored him then, too. See, they're both into dinosaurs. Yes, at 5, that is a huge attraction between two little ones. Apparently K calls Andy her "husband" at home, and has already announced their impending engagement. (Other than the dinosaurs, she's very... pink. Adorable. And pink. So it's really, really cute.)

We arrived at the party slightly early, because I'm like that, and the birthday girl arrived shortly thereafter with her family in two cars. As we watched them park, the mom almost leapt from her car to get K out of the other car- the child was so excited she had apparently tried to open the car door before the car had stopped- and K almost flew across the lot to Andy, squealing "Andy! Andy! Andy!" and upon reaching us, both of them bounced upon their toes and hand flapped in unison.

Please note that neither of these children is autistic. They were just that excited to see each other. They bounced in unison, then started running up and down the landscaped grass strip in front of the gym, which both I and K's mom were wise enough to allow, lest both children explode.

K followed Andy around the whole party. As long as Andy was doing it, K was into it, sometimes to her mom's apparent surprise- jumping, climbing, tumbling, off they went. Yes, she played with the other guests, but Andy had to be there. And Andy's height was only matched by a child four years older, who was there because his sister was there, and they were apparently cousins of K. A glorious time was had by all.

And did I mention Andy actually ate the cake? 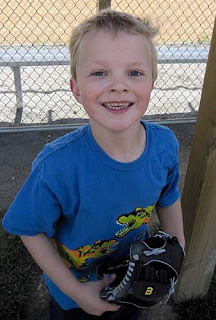 I think I'm going to be in big trouble in, oh, ten years. Give or take.
Carefully crafted for your viewing pleasure by Joeymom at 8:06 AM No comments: