I had my sixth meeting with school folks today. This one was completely different. For one, the principal called me and asked for the meeting. For two, I didn't go in with a powerpoint or notes about my kid's strengths and weaknesses, drawn up specifically for the meeting. I just took The Notebook.*

Apparently, they figured out that when I said Joey is "good at math", what I meant was, "he's frickin' BRILLIANT at math."

So the principal wandered into Joey's class, mostly to see how he was doing. Often if Joey is having a hard time, and Mr. R walks in, Joey can pull it together and at least get to his desk (kind of like having the CEO come in to your office, even if the politics around there are awful... you do your best to pull it together so you don't get fired). So he sometimes just pops in and checks.

It was math time in the inclusion room, and the class was busily working on a math test. Well, everybody except Joey, who was at his computer. Mr. R immediately asked why Joey wasn't also working on his math test, and Ms. C handed him Joey's test: he completed it in about two minutes, and got a 100% on it.

Yeah, Joey is good at math.

Whatever else I might say or think about Mr. R, he definitely has this going for him: he knew this was Not Right, and that having Joey bored in a classroom would aggravate the problems we're already having. Hence, the meeting today.

The plan is to see where he is in math skills, and get him in a proper math section, even if he has to be in a fourth or fifth grade section. If he goes to a fourth or fifth grade section, he will absolutely have to have his own aide to take him and help him navigate all the non-math stuff that one deals with in a classroom while learning math. As I said to Joey's kindergarden teacher, Ms. S, long ago: It's not the academics that are the problem. It's Everything Else.

It was a really interesting meeting. We were seriously trying to get a general idea of what might happen if he blew away the fifth grade test and needed sixth or seventh grade math instruction. They saw it as a very real possibility. They were serious.


*The Notebook contains all the papers, IEPs, letters, emails, etc. for a given school year. We're already into a 3-inch binder for this year.
Carefully crafted for your viewing pleasure by Joeymom at 9:38 PM 6 comments:

Back to School Blues

Welcome to Week Five of the school catastrophe. If there was a mistake to be made, we've made it; we now stand as an example of why appropriate service is absolutely vital to the success of a disabled child in school. You can't just shove a child into a program, it has to be individualized with appropriate support- both in quantity and quality, and year-round. Poor transitioning results in disaster.

Transitioning seems to be a major weak point in our school system and faculty training. The teachers Joey has are, to be clear and honest, working their butts off trying to get his puzzle figured out and come up with appropriate solutions to support Joey. However, it is hard to think of solutions when you don't have sufficient understanding of or training in the problem. When one tends to focus on behavior rather than understanding communication and issues, everything becomes a problem of discipline. This can be reinforced when Joey can pull himself together enough to be functional when someone such as the principal or one of his old teachers comes into the room. That the distraction might give him extra incentive to swallow the frustration he is trying desperately to communicate is something that seems ignored, or at least unrecognized. How does one get teachers to recognize that my child is so overwhelming, he has shut down?

And in the meantime, what to do? I have a child so completely overwhelmed, his teachers feel the need to separate him, and have gotten to no academic work in five weeks. When I say this child has shut down, I mean he becomes so completely non-functional that he is removed to a 1:1 self-contained setting- and still gets nowhere. How do I help my child survive this problem of transition, this overwhelming new-ness, this bump on his road?

When the stress is overwhelming, what do you do? After all, shut-down is not an option for most folks who read this blog. We have to keep going, keep functioning. Our children are depending on us to be functional. We're not allowed to be tired and overwhelmed. How do we dive through anxiety, exhaustion, depression, and frustration, to come out the other side with smiles, clean clothes, and possibly a cooked dinner?

Tomorrow, we are going to the doctor with Joey. I haven't yet gotten him into a psychiatrist, so we are going to try a back door- our family physician- to see if there is anything we can do; in other words, we're exploring medication. This is a touchy subject, and I am sure I will get comments and emails, some in great detail, for both sides (pro and con); but sometimes you realize you are fast running out of options, and running out of time, and damage is being done. Sometimes you have to examine the options, so that educated, reasonable, and informed decisions can be made. If Joey continues to be overwhelmed and uncomfortable at school, we could go from bad to worse in a way that would be even more catastrophic.


P.S.: What she said. That's kind of my life right now.
Carefully crafted for your viewing pleasure by Joeymom at 10:14 AM 8 comments:

And How Was Your Weekend?

Well, it's a good thing we went to the farm and had a hayride, so we could get this: 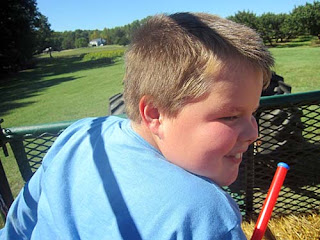 Because the rest of the weekend, we had this: 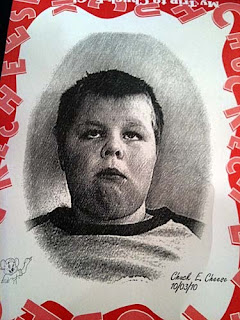 It may be a long week, folks.
Carefully crafted for your viewing pleasure by Joeymom at 8:36 PM 2 comments: