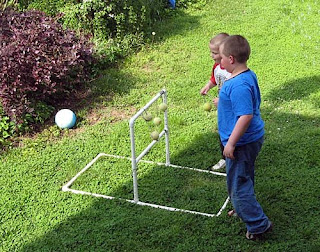 We've been playing outside and enjoying teh nice weather when we can. Uncle Lou made us a great game to play, and we've been having at it! 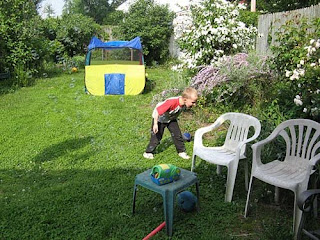 Yay, sensory overload of outside! the sky is high and blue, the roses are bright and smell great, the grass is cool and green! 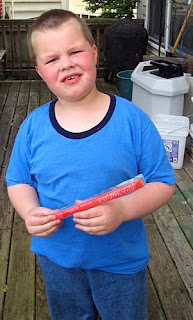 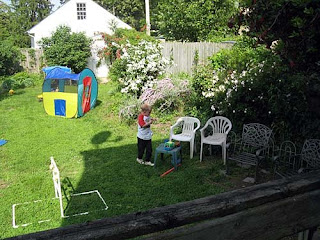 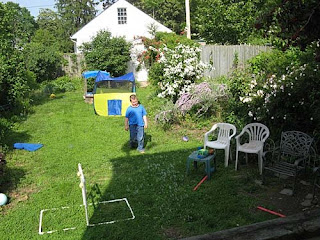 I put out the bubble-machine to make things even more exciting! 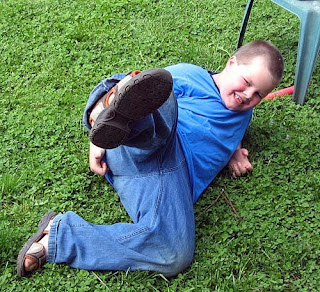 Joey showing off his new sandals. He decided his feet were hot in shoes. I don't blame him a bit.

Be sure to come in my garden gate.
Carefully crafted for your viewing pleasure by Joeymom at 2:05 PM 3 comments:

We have started a new motifvational reinforcer system here. The old system was based on 1-2-3 Magic, where they had three shots, then the reward was removed. We were working for stickers, and at teh end of the month if we had enough stickers, we got to go to Chuck E. Cheese. We haven't been in two months. Not working any more.

For the new system, they have to earn ten gold stars over the course of the day to get their sticker. Whenever they have earned ten stars, they get a sticker. However, in this system, they can also lose stars, so getting to the top of the star chart to get that sticker is tougher than it looks. Good behavior gets rewarded, poor behavior has a consequence. Or is it just a punishment? I suppose we'll soon see.

No one got a sticker today. The net result was one star a peice. Yikes. It's been a long week.

***EDIT: After a few days of this system, we're realizing that if the guys make it to the top once, they are going to CEC. This is a lot harder than expected.
Carefully crafted for your viewing pleasure by Joeymom at 9:29 PM 3 comments:

A Bump in the Road

Ah, yes, you know it is going to be a long afternoon when you arrive to pick up your son, and your usually cheerful aide comes around the corner and gives you The Look. It isn't a frown, really, but it definitely is not a smile, and you know its bad when you see it. Joey bopped around the corner, asking for sandals. His feet are too hot in shoes. This shoe-less thing is something both my boys are experiencing right now-neither want socks or shoes. For Joey, this is very bad, because without socks, his shoes become a military-grade chemical weapon (something he shares with my brother and father). I was hoping that was what The Look was for. I was disappointed.

Joey is back to spitting. This is a huge, huge issue, because spitting is so completely and utterly unacceptable. He's been spitting on the floor and smearing it around, which is bad enough; but spitting in his aide's face is a quick ticket to Ms. T. So we have come back to The Look.

"Don't you have something else to tell your Mom, Joey?" Ms. Macy prompted him sternly.

"I need sandals," he evaded.

"No, Joey. What is the other thing you have to tell Mom?"

He plopped onto the bench. "I went to Ms. T today at 11:35." Time is one of Joey's passions. However, this pronouncement heralded a long, long, long afternoon. Whatever the spitting is about, it means Joey is feeling out-of-sorts. It probably doesn't help that his visit to Ms. T became a bit of a theme to the afternoon. Even Ms. Nikki had to talk about it in speech.

So when I asked him to leave the car seat where it was in the back seat, the world came to a well and proper end. By the time we got home, he was so out of sorts, I had to send him up to his room to calm down. Unfortunately, he didn't; he got more upset, and so I set about making sure he was at least comfortable. Changed clothes, removed shoes, adjusted room temperature and fan speed, found favorite books, picked up items that he had thrown about the room. He didn't want to talk to me, but he spent another ten minutes up there, between raging and talking to himself.

Thank goodness for Dad. A new face, and we can at least get calmer and talk things over. IN talking about what happened today, Joey and JoeyAndyDad also talked about Ms. Macy, and all she does for Joey; helping him through his day, and especially letting him go out into other classes and see all his many friends; and by spitting at her, he made her feel bad. That seemed to really strike a chord with Joey; both that he made Macy feel bad, and that she does so much to help him (especially that she lets him go to other classrooms. Joey really does love having lots of other kids to interact with). He has made her a card and now says he's going to apologize to her tomorrow. And I think this time, it will be more than a kid being told to apologize; this time, it will be Joey telling Ms. Macy how he feels about it. He's sorry, and doesn't want to make her feel bad.

Ah, the Theory of Mind be damned.
Carefully crafted for your viewing pleasure by Joeymom at 8:29 PM 1 comment:

Myth 5: All autistic people take everything very literally. Consequently, they have trouble with imagination.
I have been recently introduced to two very interesting new characters. The first is a small white bear named Gyp, who likes to drive trucks. Today, Gyp was trying to go to Mystery Island. We went to the park, and at our park there is a rock outcrop, and Joey decided that was Mystery island. He spent the afternoon with Gyp in a truck trying to race to Mystery Island (running back and forth between the playground and the outcropping).
The other we met just this week: Gravy Dillider. I have our first Gravy Dillider story for you, as soon as I get the illustration scanned in to share. No imagination? Um....

Myth 3: Autistic people do not want contact with other people, they prefer to be alone, or they are anti-social.
I seriously doubt autistic people are any more likely to dislike being around people than anyone else. They may have more trouble expressing themselves in a manner that invites social connection by non-autistics, they may have issues with social skills and maintaining conversation, but that's not the same as not wanting to be around people. (Just like not being able to speak doesn't mean you have nothing to say).
Joey is extremely social, and loves other people. He likes have other kids around, he likes playing with other kids, and he likes knowing lots of people. Joey loves everyone.

Myth 2: Autistic people are savants- what they lack in communication and social skills, they make up for in wonderful gifts.
The idea that autistic people are all like Rainmain remains strong in the popular imagination. I get asked a lot what Joey's "special gift" is. Joey has strengths and weaknesses, like other children. His weaknesses happen to be more visible than other people's, and get in the way of his ability to function and communicate. His strengths help him overcome his weaknesses, and give him talents to enjoy and share- just like everyone else. The older Andy gets, the more I realize how true this is- both of my boys have strengths and weaknesses. Sometimes Joey's strengths are also more noticeable, because his weaknesses are so noticeable, and the contrast becomes striking, like a Caravaggio in a world full of Raphaels. As yet, Joey has not shown himself to be particularly a savant, but he is a very smart and very talented person, and I'm definitely keen to discover what other talents await to unfold.

Myth 1: Autistic people have no sense of humor. (Often this is connected to a lack of social awareness).
Yes Joey has difficulty with jokes. It isn't because he doesn't enjoy them; he has trouble with the subtleties of language required to tell one. However, Joey loves being silly and funny and jokes that aren't language-heavy. Well, perhaps even that is a myth. One of the teachers at school discovered I was Joey's mom and launched into a wonderful story: She encountered Joey in the hall. He's usually such a sunny, happy kid, but that day he was grumpy and making a terrible face (one of his Pinky Dinky Doo frowns, which are quite dramatic-looking). She asked, "Joey! Where's your smile?" He replied, in his grumpiest voice, "Not here!"
She met him later that day. He looked up, saw her, smiled like a Cheshire Cat... and pointed at the smile with both hands, to let her know his smile was back.

Myth busted.
Carefully crafted for your viewing pleasure by Joeymom at 10:51 PM 1 comment:

Joey has invented a creature/character to tell "made-up stories" with : Gravey Dillider. So far, Gravy Dillider is a light purple bear who likes to swim in purple water in a pond, he likes to splash in the purple water. He is a main character in today's story (though we haven't heard the story yet!) so stay tuned... we may have The Adventures of Gravy Dillider!

I can't think of a better Mommy's Day gift from my son.
Carefully crafted for your viewing pleasure by Joeymom at 5:21 PM 1 comment: