Proud of my Andy 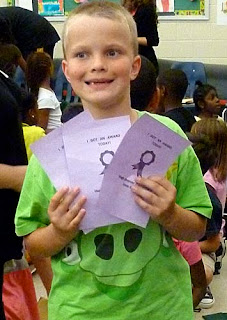 Andy earned three awards this year: math, reading, and citizenship. He's done a lot of awesome work, and had a really hard year as his visual issues snuck up and bit him hard. I am so proud of him!

But we are totally ready for summer vacation. Well, he is. I'm still scrambling to make some plans.
Carefully crafted for your viewing pleasure by Joeymom at 7:06 PM No comments:

I think we need Ryan a little early this week. 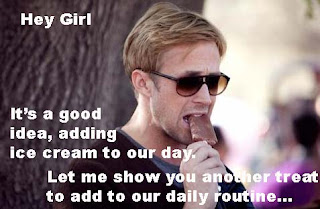 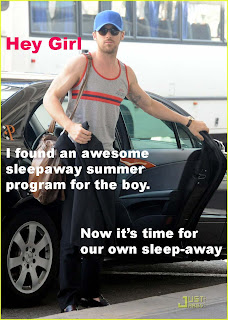 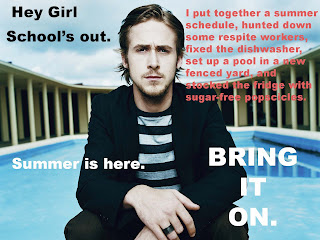 We love you, Sunday. Keep the faith.

Carefully crafted for your viewing pleasure by Joeymom at 7:39 PM 1 comment:

I have gotten a variety of responses to my decision to pull Joey from the awards ceremony, instead of having him attend without getting an award. I wish more people would just comment here, but I'll just give folks a rundown of the email, comments, and other snippets from the various sources where I have mentioned, spoken of, posted about, or otherwise brought attention to the fact that Joey, despite being able to run rings around any student in his school and most of the adults when it comes to math, is not getting an award, and I am not sending him to the ceremony:

The vast majority of the comments have been more or less supportive of the decision.

A small, stinging minority have been negative, questioning my reasons for not sending him, and many of these also seem to think Joey should go to "learn to take disappointment." Why this stings is because, having seen how the world at large thinks about such things, these people are actually in the majority of opinion among the general population, though thankfully, not my own circle. I still find it deeply disturbing that people would feel this would be appropriate for Joey, especially in his current state of anxiety and depression.

I have a wide variety of reasons for not wanting Joey to be at that ceremony. Some are good reasons. Some you may not think so good. Just because I have one reason you may disagree with, doesn't and shouldn't discount all the other very excellent reasons for not sending him.

1. Safety. This is really the #1 A big reason I am taking him home. With Joey's current patterns, it is dangerous to send him into that ceremony. The school has amply proven they cannot keep him safe under these conditions- a large crowd, a huge and very frustrating disappointment, overwhelming emotions, embarrassment, and noise... he's going to bolt for that door. And they have proven they will not stop him. In the end, this trumps all other considerations, as far as I am concerned.

2. Depression. I want awards and award ceremonies to be positive, motivating events for Joey. When you are child who knows you can run rings around everyone you know in math, you likely expect to receive a math award and be recognized for such a talent. When you see other people, who you know you can run rings around, getting awards (which I believe firmly they have earned and should definitely get), and you don't, that is devastating and embarrassing. Just what we need is for Joey to think his talent is worthless, or that he's "the worst at math! he'll never get a math award!" Great idea. Not.

3. Pain. I find it not only painful for Joey, but painful for me. I know what it is like to have your hard work not only go unrecognized, but basically get punished for doing the extra work or taking on the challenge of higher levels. Selfish? As you like. It wouldn't be a big deal if I thought it was all projection; but when I see the anger, frustration, depression, and disappointment explode from my child, what I see and feel is the pain. I'm still bitter, and I would rather keep Joey from as much of the gall as possible.

4. Coping Skills. Joey is still learning these skills. When he was still learning those skills and he was 6, it wasn't as big a deal if he made a mistake and melted down, he wasn't alone. People are less understanding of a very large 10-year-old who melts down when his name isn't called, and he has no way of containing the overwhelming emotion and depression.

5. Judgement. I will never forget sitting in that spelling bee, listening to parents laugh at my child... only to see their faces an hour later when he almost won. It is good for people to understand that kids with disabilities are also intelligent. It is very important for some families whose kids are in Joey's classes to realize he is an asset to that room, and academically capable. By ignoring his strength in this way, they also ignore his value, and leads to people dismissing him and even complaining about why one of "those kids" is in the classroom "distracting" their kid. There are many, many people in this world who think Joey is stupid and a drain of resources, and should not be allowed in a mainstream classroom. He works hard to overcome his challenges in communication to express his talents- more than other kids do, plus being able to do the work. But now we find ourselves back at our last post, and whining about how awards are determined.

In other words, Joey's school awards appear to gauge how well students make toast, when my kid is a hair dryer. They ignore the fact that Joey dries hair better than everyone else, even in drying class, because he isn't drying toast.

In the end, the fact that Joey will not get an award is wrong in so many ways, it isn't a joke. Joey is not stupid, and knows he is the best math student in the school. He knows what awards are, and that they are badges of honor for being good at something. He's going to notice when his talent and hard work is overlooked.

The school is just way too close to the highway.
Carefully crafted for your viewing pleasure by Joeymom at 10:46 PM 5 comments:

Update: When Discrimination Comes to the Awards Ceremony

1. The award is based solely on raw scores, not on the level of work being completed. Joey was often doing higher level assignments or extra work, often on the 5th grade level, for a greater part of the week of each lesson.

2. There is a limited number of awards permitted per class. Hence, the reliance on #1.

In other words, by ensuring he was challenged in class, we put him at disadvantage to be recognized for those efforts. It is a common enough discrimination displayed towards students with gifts, and one that results in the spiral down to mediocrity and the lowest denominator.

My plan is to simply skip the ceremony and keep Joey with me, when we will be vociferously celebrating his accomplishments in math in a way that makes it clear how proud we are of his strengths and perseverance. The school has failed to address his safety in crowds, or when he is frustrated or disappointed to an overwhelming degree. We simply cannot take the chance of having him realize that he is again to be ignored, and have him run out the door. I also think Joey deserves to be recognized by his school as intelligent, an asset in the classroom. If the school itself refuses to do this, then I will be sure he understands it himself: that he has value, that he has strength, and that he is much loved.

I believe this is a far better lesson than the alternative.


Carefully crafted for your viewing pleasure by Joeymom at 2:37 PM 2 comments:

When Discrimination Comes To the Awards Ceremony

Once again, Joey will get no math award this year. We are awaiting final confirmation of this, but I have no letter saying he is getting one. Once again it is a shock, since guess who is the top math student in the class yet again?

Why do educators not understand the importance of recognizing a student's strengths? Especially a student who has many, many challenges?

You can send me any excuse you want. Not recognizing Joey's math prowess teaches Joey a single, poignant and heartbreaking lesson as a child: his talent and gift is of no worth. His work is of no value. The one thing he does spectacularly well is of no consequence.

Then we wonder why our schools are struggling academically.

Think of it this way: if you are good at your job, you expect to have better salary and perhaps look forward to a nod from the boss. Certainly, if we do a job well and there is a big ceremony once a year to acknowledge people who do their job well, we expect a mention. As an adult, we are equipped with certain tools for coping when and if that is not forthcoming- and very often, we start looking for another job.

As a child, what is the purpose of these "awards ceremonies"? If these certificates are supposed to be motivation for kids to enjoy school and work hard, shouldn't they be used to, well, motivate?

The excuse last year was that no one seemed to know who was in charge of nominating Joey for an award. If that is the excuse I get this year, I think I may have to get that warpaint back out, and make sure everyone understands not only that this is discrimination, but why it is discrimination. Basically saying, "oops, your kid is special ed so they don't get nominated" is, frankly, bullshit.

So I am dying to hear what the excuse is this time.

Update: His case manager, the Awesome Ms. H, is also looking into what the excuse is this time. I will keep you posted.
Carefully crafted for your viewing pleasure by Joeymom at 7:13 PM 1 comment: