Our Morning at Kennedy Krieger

Well, we finally did it: we finally got an appointment at Kennedy Krieger! We were up there to check out some issues Joey has been having, but also to get our foot into the door for support as he gets older. We could certainly have gone back to Kluge, but various issues, including the current upheaval at the center, made it seem not a good idea for the long haul. And we are now hitting that long haul.

The Kennedy Krieger building is impressive, with an airy reception and waiting area that has an aquarium and a playroom as well as a cafe upstairs. We were scooted in upon arrival (with free valet parking- yay!), registered in a jiffy, and soon munching bagels and waiting to be called. Everyone was totally nice to Joey, letting him start up conversations in his way, responding to him with smiles and comments and answers to encourage him in his interactions. Joey was happy as a little clam.

Dr. Rubenstein was also awesome. We went through the entirety of Joey's tale, in detail, starting with him being a non-verbal two-year-old. The tale of the First Speech Therapist, getting him into school, getting him into therapies, getting his diagnosis, etc. etc. etc. Joey was diagnosed with autism by Dr. James Blackman at Kluge when Joey was about two and a half- in November, no less. The name apparently holds some weight, because upon mentioning this fact, the conversation shifted into a different gear. It made me wonder how many people go in to him with a lot of assumptions but no actual facts... or evaluations. I also think Joey was his usual surprising self. He does not present the way people expect an autistic child to present, especially if you have only known him for five minutes. As Dr. Blackman once said, Joey has a lot of classic autism symptoms, but not a classic combination.

We got into sketching our current issues, and Dr. Rubenstein was definitely thorough and thoughtful, considering what we were saying and seeing, and what he could see for himself. In the end, we got no answers today, but an acknowledgement that 1. there is a problem and 2. we are going to try to figure out what it is, so we can help Joey. Also, we're going back to see the nutritionist. Let's see if we can get Joey eating more vegetables. ;)

I'm always anxious when trying to sketch out our experiences to doctors. You never know what they are going to say, or think, or even if they are going to believe you. Especially when they have Joey in front of them, being his happy little self, descriptions of problems and meltdowns seem so... bizarre. Unlikely. Out of character. Strange. Besides, I seem more and more surrounded by snake oil, and finding it more and more offensive... and more and more afraid of falling into the snake oil trap. When you start talking about Andy as well, and his issues, I often catch those sidelong looks... after all, these people don't know me. Am I serious and sincere, or a crazy lady who over-diagnoses her children, possibly to drug them into oblivion or get attention? On top of that, am I going to prove to be some batty woman who follows the latest in humbug and snake oil? Some of those folks who are into the quackery can be very... insistent. Every virulent. Dr. Rubenstein clearly had plenty of these types to contend with, from his reaction to mentioning a real doctor giving us our original diagnosis and to the therapies we have been providing. When he got to the part where he was explaining he wasn't going to be prescribing us any medicines, you could see the eggshells beneath his feet. It definitely made me wonder how many parents demand pills.

We were very pleased, and look forward to getting the clues together and solving our current little mystery.
Carefully crafted for your viewing pleasure by Joeymom at 10:09 PM No comments:

We arrive at Joey's OT, but the other child is a little late. To calm himself and fill the time, of course Joey decides to become Super Luigi, running about the office. In the meantime, Andy is trying to hunt zombies with his magic invisible zombie bullets (since we aren't allowed to have darts in our nerf guns unless we are in our own back yard). In assessing the situation, I make sure the boys have the equipment they need. Does Andy need a gun strap? Does Joey need his cape?

What, you thought I would have them sit int eh waiting room or something? They just got out of school! This is their usual scootering time! Get those wiggles OUT!

I cleaned the car out this morning in preparation for our big trip up to Kennedy Krieger in the morning, so I am down to basic car supplies. The cape got taken in. Fortunately, part of my supply kit is a towel. I tie it under his chin and off her goes.

"Wow, you have a towel in your car?" the therapist asks, amazed.

"Of course I do," I reply. "Don't panic. And never forget your towel." 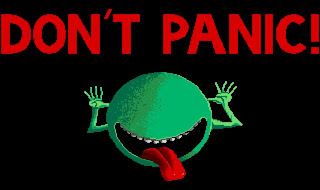 Carefully crafted for your viewing pleasure by Joeymom at 9:36 PM No comments: 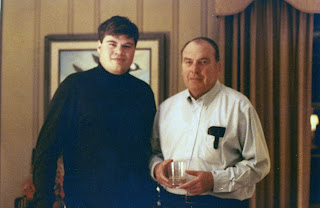 Two people I miss something awful: my brother, Beau, and my Pop Pop Conway.
Carefully crafted for your viewing pleasure by Joeymom at 8:16 AM No comments: