Hmmmmm... The Issue of Recognition

When I was in fifth grade, the great goal of the "gifted" set was to be on the Safety Patrol. To wear that sash and badge and help direct the little ones to their buses was the mark of honor, the reward we got for putting up with a good deal- jibes and teasing from classmates for being nerds and curve-breakers, the scrounging of the over-acheivers and their busybody parents (helicopter parents are not as new as some would have you believe), and the work involved in learning and doing extra work that was often assigned to keep us busy. Being socially isolated on top of that, I took great pride in showing myself to be somebody by wearing that badge. I had the extra knock in fifth grade because I didn't test into the highest math group (in the tests, though every single I gave was accurate, apparently I did not do the problems quickly enough...), making me a social pariah even among the gifted group as "not good enough."*

When one is doing a lot of work and getting very little reward or seeing very little use in it, little things like awards and certificates and hearing your name called can be a huge deal- especially when you are a child.

Seared into my memory is that day I was not made a patrol for a whole six weeks of the fifth grade. My whole little world was aimed at maintaining my position, perhaps to be eventually made Captain! But no, I was knocked aside- with only one B on my report card (my handwriting sucked)- for a girl with all Cs, and one who was particularly good at making it clear I was none too socially included in my class- I was too tall, too plain, too fat, and too bookish.

I remember the teacher sending me out of the room, because I actually started to cry. Did she have any idea what a disaster had befallen me? No, she had no clue. I got a lecture about how I was supposed to be so mature, how she needed this award to go to this girl who had worked so hard to get that all-C report card. How I would have this honor many times, and this might be the only chance this girl got. Oh yes, I remember. I could quote you the conversation exactly if I didn't think you'd find it boring. And I reacted like a 10-year-old might, left to pull myself together in that hall and chew on my disgrace among my peers, alone. To be honest, it still makes me tear up, that's how horrible it was. After all... I was ten years old. The reverberations from that disgrace actually did follow me for the rest of my school years, forever on the fringe.

At ten, I comprehended what the teacher wanted, and why this had happened. My brain processed it coldly, and still chews on it now. Someone else needed a reward. They needed something to work for. They needed a goal, a carrot before their nose. And apparently, I was undeserving of that. My work was worth nothing compared to the needs of another. My needs were not as important as another's. Clearly, my own pain was a frivolity, my own position of less worth. Why would a child who has talent need a reward for those talents?

We can, as adults, probably see clearly why that girl needed that safety patrol badge more than I did; I can already tell you who will tell me so, either in the comments or the emails I will get later, about how petty and childish it is to dwell upon that moment, or still feel it painful to do so. Certainly, that teacher did what she needed to do to help that other girl- she rose to be Captain of the Patrols (what a miserable six weeks that was for me), and a decent student through high school. I can sit here and reason it out and provide solid logic for it. None of that adult reasoning does anything to help a ten-year-old girl, I can tell you, especially one who was still considered new and trying to fit into social circles enough to at least not feel alone.


Joey came home today with his awards from school (we didn't go to the ceremony because he was at Mt. Vernon- he got his awards when they got back). He has certificates that say he knows multiplication 0-4, and 0-9. Woo. Hoo. He's known those for almost two years now. He had a nice Health Award, and a Most Improved Participation in Music award.

And that is what he got. No math. No reading.

Kinda makes you wonder about who gets awards and how it is determined, doesn't it? Your top math student gets no math award? What's that about? Do people not understand what powerful reinforcement these awards can be?

Trust me, I just spent a lovely twenty minutes hearing all about it. The field trip to Mt. Vernon? I had to pull teeth to get anything about it. That two other students got math awards, and he didn't? I know all about it. And I assure you, I will be giving him lots of hugs and kisses and working hard to make him understand how proud I am of him tonight. After a year like he has had, to have no recognition of his strength in math before his peers is, I know well, searing. Already being the only top math student not in the gifted program, plus being disabled with social interaction issues, is quite bad enough, without this. Add into it the loss of the spelling bee. And after the year he's endured? Come on, let him know you are proud of his academics. It's not like its even being a patrol- all it costs you is a piece of paper. Seriously.


*And just a little fault of vindictiveness here, boy did I prove that to be a joke when I became the youngest captain of the high school math team as a junior.
Carefully crafted for your viewing pleasure by Joeymom at 3:55 PM 5 comments: 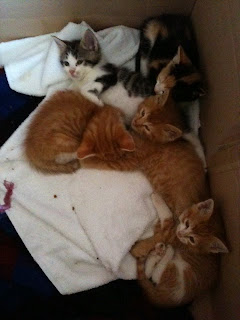 A neighbor has five lovely little kittehs up for adoption. If you are in the Baltimore-Washington-Richmond corridor/area and need a nice babeh kitteh, drop me a line, I'll hook you up with a little sweetie-petitey.
Carefully crafted for your viewing pleasure by Joeymom at 3:01 PM 3 comments:

We Have A Winner

With the end of the school year comes those awesome awards ceremonies, where you get to see your kid get an award for being awesome. Last year, Andy got no awards. He was very upset, and I didn't blame him, since he worked very hard all year. But that is how it goes with awards- not everyone gets one. 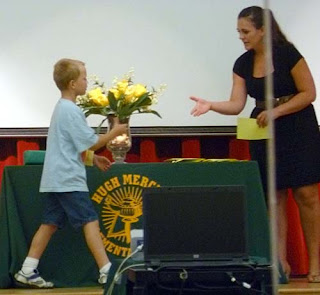 This year, he got three.

Andy earned his Excellence in Reading and Excellence in Math awards, which are based on the testing the schools do. The Reading one also considers if you choose to read or write when you have spare time. What was super-cute is when they asked "and who will be doing lots of reading this summer?" he hesitated before tentatively putting up his hand... half-heartedly. Hmm. But don't worry, I have some awesome books for him for the summer, we should be fine. The math award is more rare than the reading one, so that was pretty cool.

He also got the Good Citizenship award- the one you get when you have behaved yourself all year and been a good friend to everybody. Suspiciously, the bully we had to contend with this year also got Good Citizenship. Hmmm...

I am super-proud of my soon-to-be-second-grader. He is awesome, and worked hard this year to be super-awesome. Go, Andy!!!
Carefully crafted for your viewing pleasure by Joeymom at 10:27 PM 2 comments: