We had a little snow adventure today. Mom has some doctor's appointments that are needful, so we had to get her dug out and to them, lest we have another several-week wait to see these people. So once again, I set out to retrieve her from the country.

When we had our Jeep, this was not a terribly difficult matter. However, the Jeep got creamed by the shuttle at JoeyAndyDad's work, so we don't have it this winter. We are waiting for the settlement to start shopping for a new one, because winters like this do happen- and besides, his work requires him to be there even in bad weather. Anyway, we don't have a 4WD vehicle right this minute.

I loaded up the boys and headed into the Wild Blue Yonder to go over the river and through the woods (literally). I must say I've been mostly impressed with the snow removal in these parts- the main arteries were mostly dry, most of the side roads are clear, and even the little roads are passable. Heck, even the road back to my mom's was plowed and minimally slushy, and that's practically a miracle. We got to the circle, no problem.

I sat in the driver's seat, poised at the top of the driveway. Let me tell you a little about the driveway at my mom's, the one I learned to drive on. It is about a tenth of a mile long through the woods. From the circle, you dip down into the driveway; back about halfway is an intersection as the driveway teardrops on a slope. You bear left to go straight in; you bear right to head up a small slope, then have to turn a hard and steep left around to face out again. I had a plan. I would go the left, and just before getting to the steep loop, I would gun it up, then back in a y-turn to the parking, and be facing out. This would save me a potentially dangerous slide around that steep loop.

The last vehicle down this driveway was the big electrical trucks after the last storm, so we had to deal with the new accumulation, some four inches on top of the other, which has melted down some in the interval. I sat poised, looking down the stretch of virgin white. Without my 4WD, did I chance it, or not? My mom cannot walk so far. The appointment was an important one. I took a deep breath, and plowed forward. Yep. I'm an idiot.

I made it, oh, about a quarter of the way. The snow was incredibly wet and heavy, but the real problem was that the center of the driveway- between the ruts made by the electrical trucks- was still higher than the clearance under the van. With it being so heavy, my van, not being a snowplow, could only push so far; and the wet snow turned to slick smoothness of ice under my tires. Suddenly I couldn't go forward any more- and I had no traction to go back. Quietly cussing myself out, I got the boys out and we walked down to the house. I explained the problem. My mom, a wiser woman than I, was surprised- she thought I would honk from the circle. Which is, of course, what I should have done.

I got the boys inside, grabbed a shovel, and headed out. I tried to get under the wheels and dig to the road surface. Unfortunately, I couldn't get enough out from under the wheels themselves for this to work at all. I went back, fetched a bag of fertilizer, and headed back to use that traction. A good deal of wheel spinning and choice words later, I head mom calling- she had a rug to try to put under the wheels. I ran back and got it, and was shoving it under the wheel when I herd another car. I looked up to see a large truck with a snowplow blade on the front, perched as I had been at the top of the driveway. Oh no, I thought; even if I can move the car, I'm stuck!

But then, blessings on him, the guy got out and offered to pull me out. We got hooked up, and got started.

And that's when his truck got stuck. Remember that dip into the driveway from the circle? That equates to a steep little hill to get back out to the circle. Try to climb up and out is hard enough, without having a van to pull behind you through thick, heavy snow.

He and I shoveled the worst of the snow out of the way, trying to make it easier, but he just could not get up that little incline. So then the second angel appeared- in the form of my moms next-door neighbor, who has lots and lots of man-toys. One of them is a large 4WD truck with a tow chain. We attached that truck to the snowplow truck, and started again. The circle was well-plowed, and wet, but not icy; so after some more revving and cursing, we were on the move! Up and out!

The nice guy with the plow then tried to plow the drive, but the snow was so heavy and thick, he couldn't do too much. We managed to get some of the snow off the left-hand straight way, and make nice ruts to drive on, but not all the way to the parking area- in fact, the steep loop is currently blocked by the snow push pile. He kindly brought my mom out, though.

We are definitely replacing the Jeep, ASAP. You never know when we're going to have a winter like this.
Carefully crafted for your viewing pleasure by Joeymom at 5:43 PM 3 comments:

So my kids have been home since Friday, and today is Wednesday. Looks like tomorrow's school will be a wash, too. I'm not too hopeful for Friday. Oh, and they have Monday off. Our school system isn't even thinking about what days to use for make-ups until March!

Shopping to replenish supplies for ourselves and my mom yesterday, there were a lot of those "oh, no, the kids are home, AAAA!" jokes being passed around. Even one of the stockers smiled at me and conveyed condolences for having two little guys "stuck at home."

It was a huge reminder of how lucky I really am. I have two boys at home to hug, squish, smooch, and play games with. We can go sledding, play in the yard, and drink hot chocolate. We've had a marathon of Zoboomafoo, Wonder Pets, Peep, and Magic School Bus, sprinkled with Toy Story and Cars. We play Twister, Shopping Center, Feed the Kitty, Pushover. We're baking another cake today. I'm considering playdough.

Are we running out of things to do? Kind of. But don't send me any pity- I have two good, good boys, and we're enjoying ourselves today. Right now, they're pretending to be fish in the living room. Um, excuse me... I've just been told I'm a shark...
Carefully crafted for your viewing pleasure by Joeymom at 8:34 AM 1 comment:

Prepping for Round II 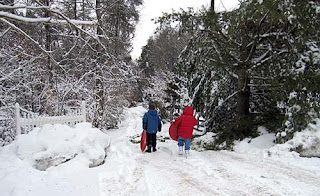 We made sure Grandma had plenty of wood upstairs and non-perishable food to eat, in case she loses power again. The boys got to give her lots of hugs and kisses. They got to do some sledding there, and then some more on the hill at home. We replentished supplies of sweet yumminess for home. We're ready for KillStorm 2010 Part II.

Bring it on.
Carefully crafted for your viewing pleasure by Joeymom at 2:18 PM No comments:

We have a saying here: if there is a high over New England and a Low in Atlanta, it is time to go to the Grocery Store. A Big Storm around here is six inches of snow. Twelve inches is Snowmageddon. KillStorm 2010 was about 15 inches here, about 20 down by my mom. So normally, tomorrow's storm would have caused raging panic. But on the heels of the Snowpocalypse, a prediction of 6-12 inches is now laughable.

All the same, after having my mom just survive 53 hours without power and spotty heat through the coldest temperatures of the winter, I'm a bit on the nervous side about tomorrow. We've had a bit of a roller-coaster here, and here comes our second time around in a week. All fine if you don't have to go anywhere and have your power. Not so great if either of those things are nixxed.

What a year to lose our Jeep.
Carefully crafted for your viewing pleasure by Joeymom at 8:11 PM No comments:

No power yet at mom's

33 Hours. No power yet. I managed to get out to her to get wood upstairs and stuff, but no power really, really sucks. Especially when the "estimate" was an hour ago, and there isn't even a truck in sight.

Update: They are now scheduling her for 10pm February 9. That's right- tomorrow.

Update: The trucks showed up at one, and the power was restored at 4. HALLELUJAH!!!! Really makes us wonder about getting her a generator, but then that could be just another bundle of troubles. :P
Carefully crafted for your viewing pleasure by Joeymom at 8:43 PM 1 comment: 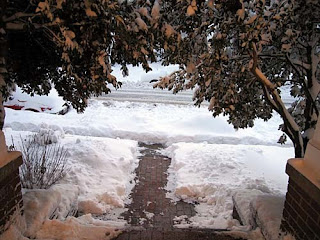 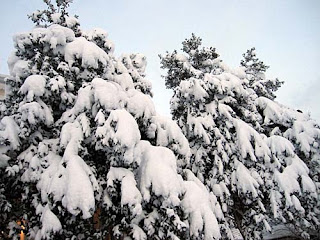 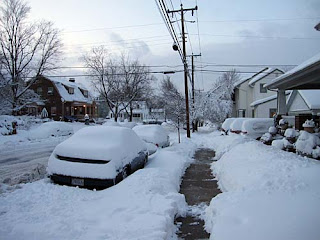 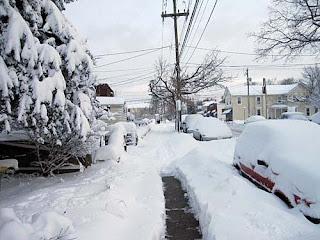 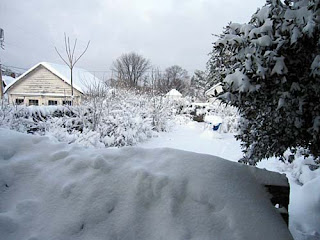 The snow lifted off about 5pm. Here's some pics from about 6pm. Waiting on word about my mom's power situation.
Carefully crafted for your viewing pleasure by Joeymom at 8:06 AM No comments: