I am so tired sometimes. I look at what is happening in Joey's world, and the issues being created by the adults in it- or simply being left unaddressed- and it makes me tired. No wonder Joey is exhausted. The constant anxiety in which he lives his life, and the ways people react when he expresses it, would be enough to leave most people ready to... well, jump in front of a car. Or run screaming into the night. We shouldn't be surprised when he attempts to do just that, really. Sad and angry, but not surprised.

Let's take yesterday for an example. I'll start in the immediate middle of the story- Joey returns to his mainstream classroom and finds a good friend has been assigned "silent lunch"- that is, he will not be able to sit with them at lunch, and he understands they are being punished. Despite the friend's assurances that this punishment is merited, this causes Joey serious anxiety.

The expected response in society is that the child "stew." That is, they might be angry about the situation, but they keep it to themselves. This likely makes the child appear peevish or grumpy, but they keep their thoughts to themselves, letting the anger rattle about in their heads without coming out their mouths. Interestingly, we all too often go on to berate a child in this situation for being grumpy and irritable, instead of giving them time and support to work through the emotions for which they have no available outlet without getting into even more "trouble." Should the real anger and frustration come out, we often punish the unexpected behavior to silence the child.

Joey does not have this coping mechanism. We have taught him- gone to great pains to teach him- to speak. Additionally, being autistic, his use of language is different- for Joey, he attaches emotions to words and phrases, and so when those feelings arise, those words come out of his mouth. Unfortunately, discomfort, embarrassment, and anger have been attached to words and phrases that make him uncomfortable, embarrassed, and angry, and those words are not ones we use in polite company. Taken with a 10-year-old's increased emotional load and anxiety due to normal development and the onset of puberty, you can imagine that Joey might get quickly overloaded in this situation, and revert to fight-flight mode.

We have strategies in place to keep him safe from flight. We have people to block doors, places for him to go, signs to remind him when he enters blind panic or rage to stop and give him that breath of time to recover enough to be functional, even if minimally so. Enough to stop the flight.

Apparently, we have not done such a good job if his brain decides to go with fight.

Joey became increasingly verbally abusive, and I am actually surprised he did not become physically abusive. Something was different, it was wrong, it was a horrible ugly rent in the fabric of the universe for him. He got angry, and he dealt with that anger in a way that society views as unexpected- he communicated it verbally. And loudly. And without appropriate and proper intervention to help him work through it, he spiraled out of control, and into a dramatic meltdown. Probably about a level 4, since there was minimal physical damage. But enough that I think the teacher freaked out a bit, never having seen a real meltdown before. There was no one in the school with solid autism experience or understanding of behavioral responses to intervene and support either Joey or his teacher.

He finally returned to his self-contained classroom, where he started to lash out at the adult before him- his teacher. And she reminded him- prompted him- that she would not have it, and that his reaction was unexpected. The short walk to the classroom, and being confronted with a new person, likely gave him that half a breath he needed to start pulling out of the anxiety response- he remembered himself, and stopped. Unfortunately, this was used as evidence that he could stop- if not in the official reporting of the incidence, certainly in the minds of the adults dealing with the situation.

And so the mainstream teacher wrote him up. And the admin awarded him the glorious consequence of an in-school half-day suspension.

And now comes the kicker. See, this is the middle of the story. This was the trigger event. This was the behavior and the consequence, but I haven't given you the whole antecedent.

When I spoke with the teacher, I asked about his day. I learned two important things:
1. His schedule had been altered to include a morning activity of writing. Although he did well with the activity, and seemed fine, it was a schedule change. It was unexpected. But perhaps we can assume this was not feeding into the problem...
2. But being teased at lunch probably should not be ignored. Most of Joey's classmates are now very, very familiar with him, but there is a new child who is still learning. Apparently, New Kid somehow goaded Joey into bolting from the cafeteria at lunch. It is unclear whether this was deliberate, or whether Joey's lack of filters meant he overheard something the child was unaware Joey would act upon or even hear, I don't know. But the result was that Joey understood he was being goaded into leaving, and he left. Joey knows when he is being targeted and teased. Imagine how you would feel.

Connecting discomfort to the lunch period, he then went back to class and found that a comforting person would not be having lunch with him. You know an uncomfortable situation is looming, and now you are shown evidence that something that makes it bearable is being taken from you. How would you feel? And how would you react? I'll bet "uncomfortable", "anxious", and even "angry" would be in that list, my friends.

Now let's go back and review how Joey copes with these emotions... in unexpected ways.

Oh, and now let's punish him for it. That will help make him feel safe and comfortable, right? Right?

I am sure I will get email, and possibly comments, about how to "take it from the admin's point of view." Or the teacher's. Or anybody but Joey's. Save your breath. I get it all the time, I see it all the time, and it is time these "professionals" started seeing it from my child's point of view- and started offering him (and dare I say, the rest of the kids in their care) appropriate support and understanding, even when it is difficult. Hearing "we are very accommodating to Joey here..." on the phone made my blood pressure jump. Yes, accommodating, until you aren't. Like "accommodating" a kid in a wheelchair, until there is a step you haven't bothered to remove from their path to get to class. "But we put ramps everywhere else!" is no excuse. You have to put a ramp here, too.

Unless, of course, you have no intention of that child actually being able to access their education all the time- just when you feel it is convenient to allow it.

Carefully crafted for your viewing pleasure by Joeymom at 4:24 AM 6 comments:

Disappointed. But not surprised.

If you haven't heard yet, Ann Coulter pulled out the r-word. I don't understand why people who make their living being in the public eye can't watch their mouths. Or perhaps Ms. Coulter wanted to call out every special needs person and parent in the country and insult them. Perhaps put them on show. You know, the whole "who is the 47%?" thing, the people Mr. Romney doesn't think it is his job to care about.

I'm disappointed. I wish I could say I was surprised, but I can't. See, I've also been following the posts of my politically-minded friends online, on a variety of forums. And unfortunately, this attitude is not uncommon, especially in certain kinds of political circles. With the brief discussion of education in the debate last night, they came out in force, cracking jokes about special education and the students who are in special education environments- especially in self-contained environments, not that inclusion and mainstream environments were left to be sacred, either. Friends who posted how they were in the "advanced" class, because "there were no paste eaters", or were in the class with "window lickers." Jokes about the "kids on the short bus." Jokes about kids who walked differently, talked differently...

And who fits this description? 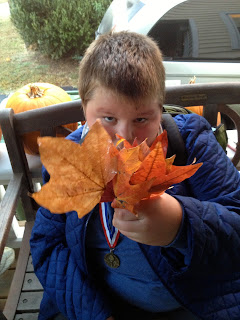 I started to reply to some of those friends, but I realized I was just opening up my beautiful son- who can run circles around his classmates in math and spelling- to more abuse, more ridicule, more hate, and more plain meanness, as was laid bare in these comments by my friends and friends of my friends.

And by Ann Coulter.


Join the Blog Hop on this topic. A lot of people are saying important things. Mostly, "I love my family. Quit dissing it."

Carefully crafted for your viewing pleasure by Joeymom at 1:59 PM 6 comments: