Happy Blogiversary to me

Three years ago, semesters were closing, IEPs were looming, we were coming to the close of one age and entering another: kindergarten. Speech was a new thing, something to celebrated with every syllable; answering questions was something to blog about. Andy had just moved into his Big Boy Bed. Joey's default mode of communicating any kind of frustration was to scream loudly in my face, the closer the better.

We were already three school years into our "new" life of being diagnosed; of interventions, therapies, IEPs, and and accommodations. We had plowed through the fear, and emerged on the other side with the realization that Joey was still Joey. He hadn't changed. We had. Why had we been afraid? Because so much was unknown, and people who were supposed to be helping us were actively blocking us, fighting us, making it difficult to get Joey help, for us to get help. We wanted to help others get through the fear, fortify themselves with information, and share our experience. Don't other people get tired of reinventing the wheel all the time?

What we discovered after a while was a network of other folks, and we have soaked up your experiences and knowledge to help us help Joey and Andy. Today, Joey can ask questions and initiate conversation. He reads and writes and lets us know what he needs. Andy is about to start kindergarten. Both boys are toilet trained, screaming is not the primary form of communication, and we are saying goodbye to old friends like Oobi and Blue's Clues... my boys are growing up!

And to you guys: thank you.

I may not be a big, wide-read, famous blog, but I think we are achieving our purpose: a comfy corner to take a breath, shed the fear (and the exhaustion), and know we are all here having our favorite beverage of choice on the comfy couches. We're pleased and honored to have you here. And today- have some cake and ice cream, too.
Carefully crafted for your viewing pleasure by Joeymom at 2:40 PM 7 comments:

We are through our IEP for Joey for next year. Joyfully, it was a smooth meeting, and things look good. More later when everything is processed and wine is consumed.
Carefully crafted for your viewing pleasure by Joeymom at 11:26 AM No comments:

What is "Tongue-Thrust" in Spanish?

In Andy's preschool, they have Spanish class every Wednesday. I think it is useful to learn new languages, especially since I have a difficult time with it and the world is full of people who do not speak English. Unfortunately, I failed to consider the issues my own child might have with learning a different language.

Lately, he has been very upset about going to school on Wednesdays, because he doesn't want to do Spanish or Music, his two Wednesday specials. So I have doing a lot of trying to pull out of him why he doesn't like Spanish or Music. And this morning, I got some answers. Apparently his little friend thinks singing is "yucky" and Andy is upset about that, because he likes music, but he doesn't like his friend saying that the songs are yucky. And then there was Spanish.

"Worth er yucky."
"The Spanish words? You don't like the Spanish words?"
"No."
"Why don't you like the Spanish words? What words have you learned?"
{Tangle of sounds that included, I think, "Spanish", "pretend", "words", "don't like", "yucky."}
"Spanish isn't pretend. It is a real language. We speak English. Not everyone speaks English. People in other places speak different languages. Some speak Spanish; people in Spain and Mexico speak Spanish. Some people speak French, or German, or Hindi... and Mommy learned a language called Sanskrit! People spoke it a long time ago."
{pause, then something that I think included something about sounding funny.}
"Are you having trouble saying the Spanish words?"
"Yeth."
"They don't sound right?"
"Yeth." {Something that included the name of his friend.}
"Does {Andy's Friend} say the words? Can he say the words?"
"Yeth."
"And you have trouble saying them?"
"YETH!"

Oh, dear. So we talked a little about how it isn't his fault that he has trouble saying the words. And I told his teacher that not being able to say the words is frustrating him, and I suspect someone was making fun of him not being able to say them properly- or he perceived they were making fun of him. Perhaps the Spanish teacher needs a little birdie to remind her he has an articulation issue?
Carefully crafted for your viewing pleasure by Joeymom at 10:22 AM 5 comments:

End of another semester

Well, here it comes. If you want the snark, you need to go to another blog. Here, its just exasperation.

I'm an adjunct. Just as my career was about to kick in, I had life happen, so here I am. And I can tell you, it gets very frustrating this time of year. At the end of spring, you find out your fall schedule, and try to wrap up another year of academic fringes. Students start to cuss you out, especially online (hint: don't start snarking me on Rate My Professors until AFTER the grades are turned in. I can kinda tell who you are by what you complain about.)

Funny, but the vocally negative students are the ones you wanted to smack upside the head most of the semester. Who continues to read a book after the professor finishes roll call and steps forward to start the lecture? Who goes three weeks into a semester without either buying the textbook or locating it in the library, and thinks this is a legit excuse to have deadlines extended? What is the point of being a good teacher if people are going to complain that you actually expect them to do work, and do it by the due date. Do these kids really think their future employers are going to accept unproofread work, or late work? Talk about the fast track to no where- or more likely, the unemployment line.

And hey, our new department head seemed really happy with the student reports about my teaching, so much that she mentioned it at a faculty meeting... but it looks like I'll have fewer classes in the fall. How does that work?

Someday, I will get a real job. That day is coming. I can feel it. I was kinda hoping it would be at one of these local colleges, actually, because I grew up here. This is home, and I want to really be adding to it. But if this is the way it is going to be, maybe a change in career is in order. Adjuncts are a dime a dozen anyhow.
Carefully crafted for your viewing pleasure by Joeymom at 1:09 AM 1 comment:

Yes, IEP season is once again upon us. Ours is Friday. So if there is no- or a lot of blogging this week, that's why.

IEP meetings are one of those facts of life with a special needs child. Here's some of the useful (I hope) advice I have given before:

The Crazy Season
Powerpoint Thinking
And for a little comic relief, For Stimey.

I'll share thoughts as I move towards this year's IEP, and continue to think about the meeting with the principal about Andy.
Carefully crafted for your viewing pleasure by Joeymom at 10:56 PM 2 comments:

Happy Birthday to my MOMMY!!!! 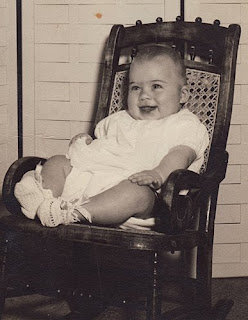 Happy Birthday, Mommy!
Carefully crafted for your viewing pleasure by Joeymom at 8:30 AM 3 comments: