Glimpse of the Future

We had our department meeting tonight for one of the college I work for- the kind of meeting where everybody sits around and complains about students not doing any work and trying to figure out how to trick them into having to do some. I got a rather rude awakening to the future in this banter, as many of the students who were considered "problems" were disabled students- some documented, some not. The excuse for not wanting to deal with these kids? "We're not trained to do that!"

Disability accommodation requires everyone involved to be proactive. This means that people need to do more work, and nobody- especially a bunch of adjuncts who get paid next to nothing- wants to take on more work. However, it's a whole breakdown of communication and reversion to reactive tactics: the disabled person doesn't want to admit disability due to stigma, real or perceived; the disability office needs to contact faculty who will be teaching a person with a disability to make sure accommodations can be and are made; and the faculty needs to be proactive in requests and getting training and support for accommodating disabled students. Community college faculty are especially in need of support, and the community college setting is often inclusion admission, and seen as a "safer" environment for disabled students. Students can stay at home with familiar resources and services, while still furthering their education.

Naturally, I opened my big, fat mouth, and started in on "you know, there are some very simple things we can do to accommodate these students which don't require any real training..." Things like turning off florescent lights and keep noise to a minimum never occurred to these people. Letting students sit in the front row, allowing for movement breaks, and visual schedules? So simple, if you know they are needful. Why they can't include real accommodations on those silly letters we get from the disability office (I think if you have any kind of disability, they just give you a letter to excuse you from timed tests, and send you on your way. Who needs individualization, after all?) Why are faculty, most of whom have never had to deal with disability in their own lives, left to flap in the wind- and thus leaving those students flapping, too?

Mobilizing to change attitudes here. "We're not trained!" is not an excuse to not accommodate; it is a call for action to get trained.
Carefully crafted for your viewing pleasure by Joeymom at 10:05 PM 3 comments:

Just what I needed: something else I want to do in life

I'd really love to be able to do this.

But I have to do this first.

It's on my to-do list. Seriously.
Carefully crafted for your viewing pleasure by Joeymom at 9:08 PM 1 comment:

Tattered on the fringe 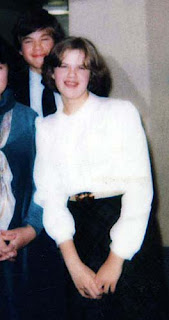 So we had part of my high school 20 -year reunion last night. Very odd. Reunions are kind of like proms- you don't over-analyze, you just go. And funny enough, people are glad to see you- even if they had no clue who you were 20 years ago. After all, being teenagers together is very intense. You never know who was watching you as you rolled down the tunnel of your own existence.

The folks who organized the reunion (and they did a fabulous job) got their hands on some of the footage that was taken just before we graduated. Most of it is from the final senior awards ceremony, the pep rally, and folks getting ready to take the big group class picture in cap and gown. That was fun to watch, partly because I wasn't in a single frame. The people who flickered across the screen were exactly who I expected to see there: the popular kids, arms around each other, living in a world from which I was excluded. 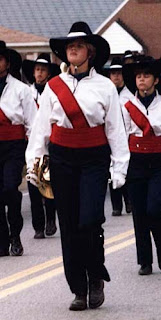 I think some folks were surprised to realize I didn't hang out with them in high school. I was a bit of a character there, with black clothes, big buttons, and the wildest earrings (clip!) that I could lay hands on. I was sad to learn the other kid who was voted Most Unforgettable was gone. Like I said, you never know who was watching. It was just odd to have people come over and want to hug you, when twenty years ago- the last time you saw them-they didn't have two words in a row to say to you. I'm not into hugging strangers (I don't even like doing it in church), and though I keep trying not to think of these people as strangers, the vast majority of them really and truly are. I was on the fringe of these people's lives, a fact made sparklingly clear by the video, those echoes of the center of the past. I wasn't even an accepted part of the fringe. I was completely absent, not even passing in front of the camera on my way elsewhere, in the lunch line, in the library. 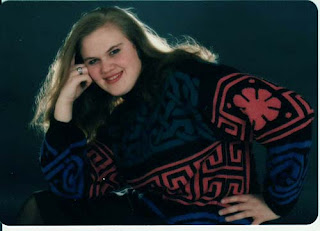 If I was making video of my high school experience, it would include a lot of people whom these people didn't know. I was far more at home at CTY and with the folks I met there. Even of my "friends" at school, I can only think of three who were actually friends to me; most of the time, I felt begrudgingly tolerated. With my CTY friends, I was just one of them. I think it is kind of the same thing those popular kids felt, sitting about the senior courtyard, hugging and singing and laughing together. A kind of "we're all in this together" feeling. Watching them laugh and talk to the camera and hug each other, kind of reminded me of sitting about the lounge of Franklin and Marshall. I might still have been on the fringes, but I was an accepted part of the fringes. The center didn't push me away, they even actively included me, asking me to come along with this or that. Being invited along is a mark of acceptance that becomes so important for teenagers on the fringe. I suspect most teenagers feel themselves on the fringe, even when they are in the center.

Sitting at the table nearest the door, it was fun to watch people step into the room, and get the look of "I don't know anyone here!" People change over 20 years. I found that guys change more than girls- the faces of the women were mostly recognizable, if I ever knew them. For the men, we were all glad we had nametags. I was also surprised at how old people looked. After all, we're not forty yet. There was a good deal of grey hair, faces with more lines than I expected. I even went home and looked in the mirror again, and seriously, I do not look as old as these people do. I wasn't expecting any of us to look like teenagers, but seriously, am I that old? Perhaps I ought to be happy that I am "better preserved" than some of these folks? I mean, some folks looked right on the money, right where I think I look... but a whole lot more than I expected looked old. Weird.

We're supposed to have a picnic today, so we can meet the kids and grandkids (!) and all. Might be interesting. Or it might not. Might give the kids something to do after being penned up from the cold and wet for two days...
Carefully crafted for your viewing pleasure by Joeymom at 9:20 AM 1 comment: