We were thinking of you today. Hope your chikkins are all doing great, as well as all the kittehs, the puppeh, and you. Stay dry. Rock on.

Carefully crafted for your viewing pleasure by Joeymom at 11:07 PM No comments:

The Way Things Get Said

Autism Speaks has a new ad campaign out there. Its a video that starts as portraying autism as the Bogeyman, then tries to show families as the Anti-Bogeyman. What a great fundraising message: give us or money, or the kids get squished. Oh, and your marriage and finances, too.

I find that offensive.

I won't sit here and try to say raising an autistic child is all sunshine and roses. Nor is it cheap. Schools do not have the resources- or often the education and training- to provide appropriate supports and therapies for autistic kids. Autistic adults are even more on their own. BUt I have said it before, and I will say it again:

Joey isn't sick. This isn't about curing anything, because there is nothing to cure. Just like we put braces on crooked teeth, but we don't talk about the kid being sick. Or we have kids wear glasses to correct vision, but we don't consider that child sick.

Our culture is quick to medicalize everything. This is partly because of insurance. Medical insurance only wants to pay for things that can be put into terms of disease. Developmental differences are not diseases. That's why medical insurance doesn't want to pay for the therapies that help individuals who have them. They want the schools to pay for that, and they have a point. However, there is such a thing a preventive medicine. Getting my child to speak and move now is going to prevent a lot of health issues- very expensive ones- down the road. Just like straightening teeth or correcting vision.

Joey is who he is. He is not a changeling. No bogeyman swept into my house and stole him away. Joey was born autistic, which means his brain is developing differently than other people's brains. In Joey's case, this development has resulted in a disability. His ability to control his body (and even, we think, for his body to control itself) and communicate has been affected by this difference in brain structure and development, and so we need to give him skills that he needs to thrive in a society that is not designed to accommodate differences. Our society's world isn't made for near-sighted people. We give them glasses.

Joey would not be the wonderful, joyful, lovely human being he is if he was not autistic. He would be someone else. Perhaps that person would have also been wonderful, joyful, and lovely. I don't know. He's not that person. I have trouble wrapping my mind around the idea of Joey being someone he isn't. I have no idea why people even try. "If my kid didn't have autism, he would be this other person..." Huh? That is what Autism Speaks would have you believe, and think about, and give them money to get other people to think about. Try it for yourself. If you weren't you, who would you be? See what I mean?

There are many ways of saying the same thing. Autistic people need supports, need understanding, need community, just like everybody else. Why not focus on autistic people as people, as human beings, and appeal to humanity? Has our culture lost so much touch with the idea that we are all in this together?

Edit: What Susan said. That's what I mean.
Carefully crafted for your viewing pleasure by Joeymom at 8:50 AM 7 comments: 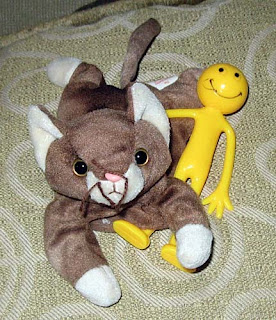 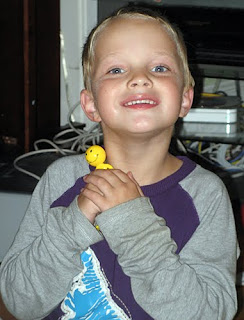 Carefully crafted for your viewing pleasure by Joeymom at 8:49 AM 1 comment:

Now back in the swing, we're having a mixed bag of getting back into the swing. Joey has been doing a lot of barking, his new anxiety behavior. Andy has apparently been holding together nicely for school; he's gotten Treasure Box every third day, like he's supposed to, so he's had no timeouts! Yay!

And then they come home, and the Witching Hour commences. Immediately. Without any baby preliminaries.

See, the trouble with holding your breath all day is that at some point, you need to breathe. In fact, you gasp for air, and try to take deeper breaths than normal to make up for the lost oxygen. He comes home and starts flippery-flopping around like a beached fish. It isn't pretty.

The first few days, I had him play with his trucks out front, but now he refuses to do that; he wants to come inside and arrange his stuffed animals and watch Peep. Well, he has to do homework first. Doing homework after any of these activities was not working, so now, homework first. The Firecracker becomes all sparks and fire. He's ready for some air, and has to hold his breath a little longer. But if I give him air, he doesn't want to hold his breath again even for a minute.

Meanwhile, our words of the week are "idiot" and "stupid." Joey picked these up from Toy Story, and now uses them to amuse himself. Andy has now realized they are powerful words, too. Whenever some one asks them to do something, or tells them something they don't want to hear, that person is stupid. And an idiot. And each other? Stupid idiots. If you reprimand or correct Joey? He says he's a "stupid boy." These words may have to be banned.

I think I may go for a new strategy tomorrow. Boys home, offer pushing of trucks, and if that is a no-go, I'm going to have invented a game that involves the trampoline. A few minutes of bouncing and a light snack, to be followed by homework. And then speech therapy for Joey. Hopefully Wednesday I can follow homework with something fun like making playdough. I'll keep you posted.
Carefully crafted for your viewing pleasure by Joeymom at 4:56 PM 5 comments: