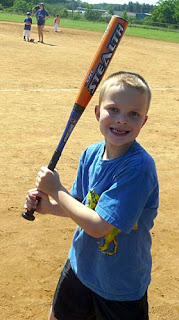 Can you believe that Andy is now seven? Where did the time go? And who is this tall, handsome dude in my house?

Andy had, i think, a lovely birthday. He started off as bat boy and buddy at Joey's baseball game. He likes being included in the games. We actually gave him the option to not go, but prep for his party instead, and he chose to go help his Joey. That's our birthday boy! 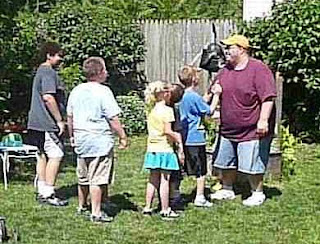 We gathered for cake and ice cream in the back yard after lunch. We had an awesome Darth Vader piñata (our theme today was Star Wars Ninja Pirates), with candy, super balls, parachute dudes and ninja dudes in it. That was hit. I am definitely doing the piñata thing again next year. Maybe I'll have time to make it myself, though- they're a little pricey.

Joey was the one who broke the piñata. It was pretty cool. 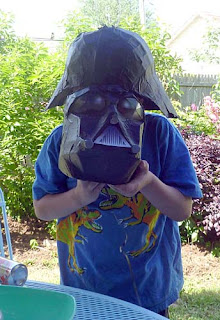 Andy decided to try the dark side out for size. Well, at least Darth's helmet and face from the piñata. He had spent the morning asking if he could wear it, and we kept telling him no, but we hadn't planned on it failing catastrophically. Since it did, he got to wear it after all. 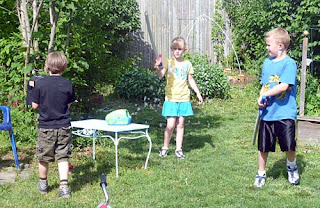 So we spent an afternoon in the yard, defeating the Evil Bubbles of Doom, playing with moon dough (which I recommend- it is pretty cool stuff) and general hub-bub of wild playing-with-our-friends. It was pretty awesome. And I periodically punctuated the frenzy by adding more sugar. 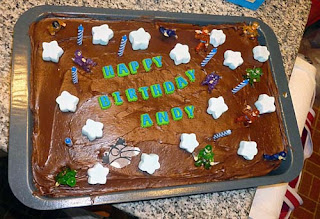 We had ice cream sandwiches of different flavors (neapolitan was a favorite), candy in the piñata, and of course, cake. Andy asked for a yellow cake with chocolate icing. Nearly blew me over. He doesn't usually like chocolate. He got it, and ate it, so hey, I'm not complaining. I put the ninjas on the cake since the rest of the decor was Star Wars, with a splash of pirate tossed in. I hoped the blue marchmallow stars would be spacey enough to connect it. Who cares, it all get eaten, marshmallows being bonus. And everyone wanted a ninja. 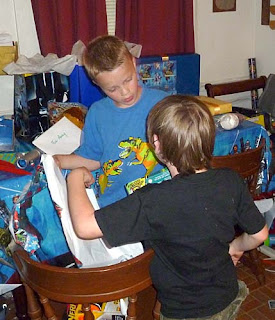 Andy got lots of cool stuff. He still has a couple things he didn't open, but we wore him out. He'll have fun opening them in the morning. He got plenty of awesome legos, nerf guns, Star Wars stuff, and these weird little plastic things with faces that come off. Seriously. No clue what they are called, but they sell them alongside the trading cards. He's been wanting them for weeks.

So, Happy Birthday, my little man. We love you.
Carefully crafted for your viewing pleasure by Joeymom at 9:54 PM 2 comments: 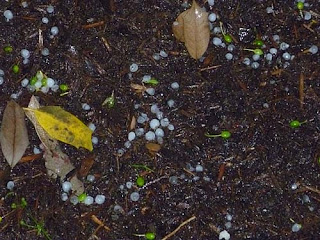 You don't often see hailstones around these parts, so when we heard them come crashing into the house, we of course ran outside to see them. They were pretty good size, too- about the size of largish peas. Big enough to be impressive, nt large enough to do serious damage. 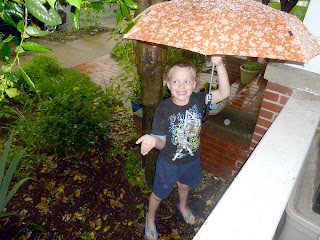 Andy thought they were delicious.
Carefully crafted for your viewing pleasure by Joeymom at 8:12 AM 1 comment:

New Friends Around the Corner

We have made an auspicious discovery- a couple of very nice kids we often see at the park, and who was on Andy's soccer team, live around the corner. We haven't known this before because the kids are homeschooled, so we didn't see them at the bus stop or at school activities; we knew they lived in town, but not so close.

We discovered this yesterday when the boy (who is about Andy's age), was coming up the street. Andy ran to say hello, and M announced, "T (his sister) is roaming free!" We agreed to help look for her, as we know the panic of not knowing where your child is. The result was I had Andy going one direction, Joey going the other, and only one of me. In the end, we all ended up at M's house, and T was found safely fast asleep on a couch, missed because she was next to a pile of folded afghans.

Andy is ecstatic. So is Joey, for these kids actively try to play with him, and they like to hug. Also, there is a baby, To, and Joey has been showing him things and "taking care of him."

We had another playdate today, It was supposed to be here. It was like a tornado was raging in the house. It was fabulous, if breathtaking. But I learned a lot.

For one, if I forget to lock the front door, trouble ensues. These kids don't quite understand, and run freely in and out of doors, and have no clue why that might be a problem. As Joey got tired and excited, he got touchy- and bolted. They figured out he was running and I was trying to catch him, and handled that pretty well. After all, To likes to run, too.

Two, Joey bolted straight for M and T's house. I gave them our phone info in case it happens again. They were very kind, and the playdate shifted to their house. T's room is all in orange, and Joey liked that a lot. Its also someplace new to explore, which can be very exciting.

New friends are always a delight, and I hope we get to play together alot. The mom is awesome, and has lots of interesting ideas about children and learning and playing; I may not agree with everything, but it is always interesting to hear a new perspective. I am thinking we might have a good party in the making, as there are several other kids on the street we know from school and whatnot now. Besides, anybody that shows this much patience and acceptance of Joey has turned out to be totally wonderful. I'll keep you posted!
Carefully crafted for your viewing pleasure by Joeymom at 6:26 PM No comments:

Oopsie, I forgot to toot the horn on the 9th for my blogiversary. And it was a big one- five years!

Five years ago, I was a mom getting bearing in a sea of anxiety, misinformation, discrimination, and panic. I saw others floundering all around me. I decided the information I had might help somebody else who was feeling lost, alone, scared, angry, disappointed, and floundering. I picked up my blog account from a blog I didn't make a go of, and started writing.

It was cheaper than therapy.

Joey was four years old. He was still in preschool. He had been going to preschool for two years. He was still mostly non-verbal- every word, every sentence was celebrated here, with you. Our school situation was in IEP crisis mode. We still get that. Our lives were dominated by Oobi, Pinky Dinky Doo, Little Bear, Potty Power, and yellow school buses. Meltdowns were a daily thing, so much so that they went unblogged.

The contrast in those early posts between Joey and Andy was so marked- Andy could talk, Andy could interact, Andy could point. He was only two years old.


It's been a long road, and we look forward to the overgrown thicket of a road ahead. Hopefully we can improve on the pruning of the folks who blazed the trail before us. My boys are the most awesome people, and I just want the whole world to be warmed a little from their sunshine, especially on the cold and raw days that so many of us struggle through.

Thank you for all the positive support and comments that have kept us snuggly on our bitter days. Feel free to make yourself at home on the comfy couches of this corner of the internet!
Carefully crafted for your viewing pleasure by Joeymom at 8:29 AM 3 comments: