Am I Really This Old?

One of my friends from high school is going to be a grandmother today or tomorrow.

Wow. My kids are still in elementary school.
Carefully crafted for your viewing pleasure by Joeymom at 10:57 PM 3 comments:

Carefully crafted for your viewing pleasure by Joeymom at 10:15 PM No comments: 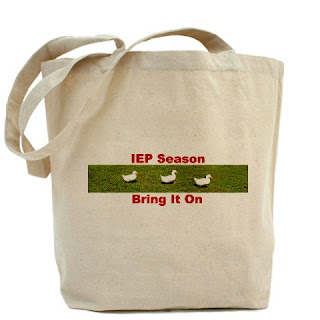 It's February. Time to start thinking about what Joey will be doing this summer.

Whether the school wants to or not.
Carefully crafted for your viewing pleasure by Joeymom at 9:09 PM No comments:

It was report card day Friday, but I forgot until I opened the bags this morning to pack lunches and, hey, look, report cards! Which for us are report papers. But whatever.

Andy's "grades" are based on the Satisfactory System. It works like this:

Apparently, this school system assumes kids (or their parents?) can't handle real grades until third grade. Andy got all S reports this time! Even in handwriting! Woo-hoo!!!

How accurate is it? He has a C in science and a B+ in spelling.

Excuse me? The boy who won the spelling bee has a B+ in spelling?

That probably has more to do with the N in "turns in work on time" than his actual grasp of the subjects. Or his N in "self-control." Which means that the report card isn't very useful for gauging much, other than, hey look, my kid is autistic and needs support in turning in his homework! Really? No kidding!

The other part of Joey's report is his IEP report. Not much has changed. Again. Which really does make me angry and continues the frustration. This is ridiculous. It is frickin' FEBRUARY, people. This time, no one bothered to put in comments except the speech therapist. We have another "no instruction" for dealing with teasing and bullying. I'm sure the excuse will be "it doesn't happen here!" I now think the only answer for that from here will be, "and what have you observed during PE and recess? How much observation has been done? And why were people laughing at him at the start of the spelling bee? How have you helped him to cope with people laughing at him in large groups like that?"

Middle school is closing in fast. And the more "no instruction" I see on goals to help him cope with the social and emotional onslaught of pre-teen angst, the more I prepare for a few years of homeschooling.
Carefully crafted for your viewing pleasure by Joeymom at 8:22 AM 5 comments:

Things That Make You Go "What?"

Only according to the ear doctor- the one in town who is supposed to be super-good- I can hear you just fine. Except that I can't seem to hear. Is it hair in my ears? Or random wax? Funny, I was in the ear doc's office because my family doctor eliminated those things already. But my audiology tests came back perfectly normal, so obviously I can hear, right? Right?

What? I didn't catch that.

I took my mom with me. I'm glad I had a witness, or I would have thought I was crazy. The ear doctor sure seemed to think I was. The only suggestion he had was that maybe I was having trouble with "background noise", an auditory processing issue; but he didn't want to give me that test, because hey, what could we do about that, anyway?

What? I can't hear you. Can you repeat that again?

I'm not saying there isn't some possibility for this theory. I thought about when I have the hardest time hearing. After a summer of fluid in my ears (which the ear doc says couldn't have been fluid in my ears, because it is really rare for adults to have fluid in their ears, it must have been hair or wax or something like that, even though I had a doctor check out my ears and apparently my ear canals are particularly clean), I started having trouble. During, in fact, but I attribute the during to the "fluid" (which, by the way, hurts, and can cause my ears to become sensitive to high-pitched sounds like boy squeals. It was a long summer). My mom noticed it. She found talking to me in the car, I sometimes didn't even know she had spoken. My students noticed it. They have to repeat themselves a lot, which they find annoying. When my doctor checked my ears, I think she thought I was being silly, too, until she tried to tell me something while she washed her hands, and it was obvious I didn't hear her.

What's the connection there? Sure enough, noise. The staticy white noise: the rush of the road and wind in the car, even with the windows up, plus the heater blowing. In my class, I am video linked to another classroom, and for reasons unknown, they placed the microphone next to the heater/air conditioner, so that there is a constant sound of blowing air or static in my classroom. The sound of the running water with the aerator. Like TV snow.

It may not explain the occasional pain, why it seems to come and go (I have days I can hear better than others, and sometimes it is one ear, sometimes the other, sometimes both), or why it suddenly appeared. But it is interesting as a theory.

So, the good news is that apparently, my ears work. The bad news is I still can't hear you.

What?
Carefully crafted for your viewing pleasure by Joeymom at 11:23 PM 4 comments: