Once again, we have had MidWinter Field Day, and of course, i went. I'm never one to pass up the opportunity to hug my boy all morning! 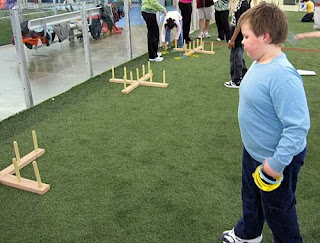 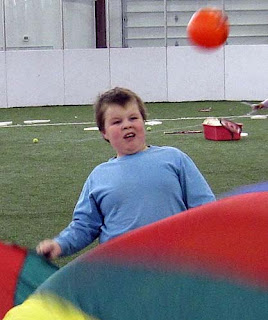 I still prefer to bring you the happy pictures of field day, but there were fewer this time. Unfortunately, we were coming off a hard weekend with some tummy ick, so he got tired fast and frustrated even faster. He would watch his friends be able to do the activities- and we were in with the self-contained class instead of in with one of Joey's regular classes- and get angry and upset that he couldn't do them, too. I keep being told he doesn't need physical therapy, or even occupational therapy for gross and fine motor skills, but it was terrible for him to be the one who couldn't speed through the sack race or walk like a crab. He couldn't jump rope or turn a hula hoop, even just around his wrist. Even trying the team walking, which he has always happily done with his beloved Ms. Macy, he quickly shifted to "I can't do this!" and ran for the gate- a problem they have been seeing increasingly during P.E. at school. 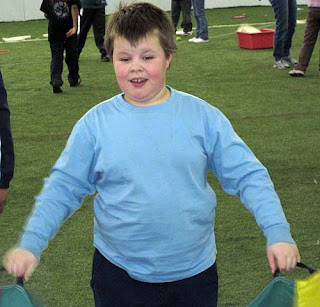 He did find some activities he liked- he always likes the parachute. He tossed a frisbee well, something he and Ms. Macy have been working hard on. He liked kicking the ball into the soccer goal. Moments of brightness. I keep telling myself everyone has strengths and weaknesses. Certainly I was never sporty, and there were these few activities he did fine with, and I tried to emphasize those. It is difficult to see him so frustrated, and to realize how different he is from the skills of his peers. I told Ms. Macy I signed him up for Challengers, and I hope it will help create positive experiences for him with physical activity. 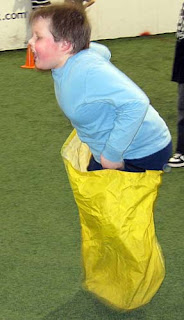 When we went into the lunchroom for lunch, Joey sat at the end of the table, near a window, so he could watch the other kids still playing. He spoke briefly with one of the other children, but was otherwise by himself, even in the crowd, chewing on his sandwich and watching. I sat with him, but let him have his time to be quiet and watch, especially since we came from a near-meltdown, even though we were giving him lots of breaks. How talkative the other kids were, even the ones in the self-contained class! Some of the regular-ed kids joined us for lunch, so there was a very happy buzz throughout the room as everyone (well, mostly everyone- food issues were far more prevalent than motor or speech issues) ate. Joey sat there, collecting himself, watching. We talked about the kids playing with the parachute, and the kids running a sack race. I gave him lots of kisses and hugs. 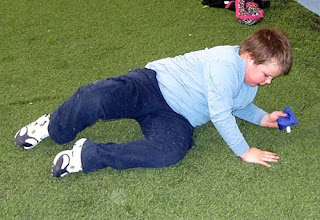 I do worry about what Joey thinks of Field Day. If you ask him, he gives you the rehearsed "I had fun." To see the other kids doing the activities- hopping in the sacks, jumping the ropes, turning the hoops, tossing the rings- so easy, so fun, so full of laughter- how does that feel to him, having just stomped off in frustration? How can I better support him, help him understand that everyone has challenges and strengths? That being good at reading and math is as important and valuable as someone else's strength in running or jumping, even if it isn't as readily visible?
Carefully crafted for your viewing pleasure by Joeymom at 8:30 AM 4 comments:

Not sure what is up with Henri. He spends whole days in his shell, comes out for a few minutes, then clams back up. So let's enjoy him while we can, shall we? Because I just don't know...

Edit 2/28/2010: We have lost Henri. This video turns out to be a clip from the last time he moved. Thanks for the fun, little guy. We're down to one fish.
Carefully crafted for your viewing pleasure by Joeymom at 10:51 PM 1 comment: