Our Adventure in President's Park 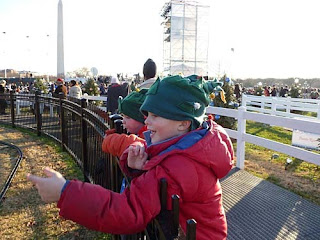 Yes, we did! We got tickets to the National Tree Lighting! And we had the most awesome seats- here we are watching the trains, and I can see our seats. Seriously. Totally awesome.

The boys liked the trains, but we didn't get to spend much time looking at them, because some official person threatened to "squish folks in" and take our seats from us if we weren't in them. At 3:30. According to the literature we had, we didn't have to be in our seats until 4:30. Besides, we weren't the only folks wandering around, or attempting to. But whatever. Mom waved us down in time for us to keep our seats. 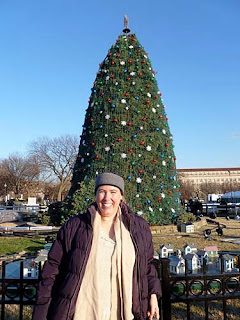 Our adventure included a guest appearance by Stimey! So not only are we awesome enough to get tickets to the Christmas Tree Lighting, we are cool enough for Stimey to hang out with us. We rock.

So we took some photos of ourselves in front of the unlit tree while the daylight held out, and before we had to race back to our seats to keep some official person from letting someone else sit in them. 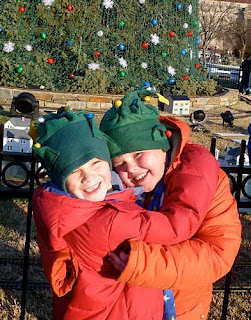 Joey and Andy were having a wonderful time, too. They were wonderfully good. Seriously. We pulled out a couple of our tricks from our bag, but they did the trick and kept everybody calm and having fun. I wish we had more time to look at the trains, though. They were digging them. If it warms up before Christmas, we might go back up just to see them. Or we'll wait until next year, if it is warmer. 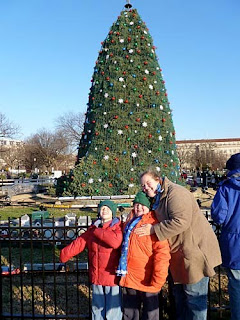 Because you know what? It was Cold. Seriously. Cold. I was glad I thought to bring the tree hats. Not only did they get us on TV (woo-hoo!) but they are made of polar fleece, so they are nice and warm. And I thought to bring extra hats, extra gloves, extra scarves, and several blankets. All of which came in handy. Did I mention it was cold? 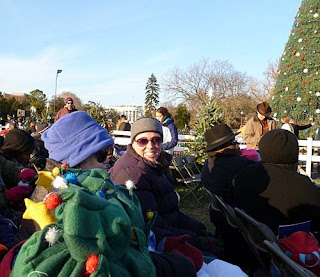 Yes, that is the beautiful and fabulous Stimey, and yes, our seats really are that close to the tree. It totally rocked.

We actually got to see the motorcade form in front of the White House, then pull away to come to the event (and joke about how he should have just walked, or used a Segway). I thought I took some film of it, but apparently, I didn't. :(

Did I mention I have a new camera? 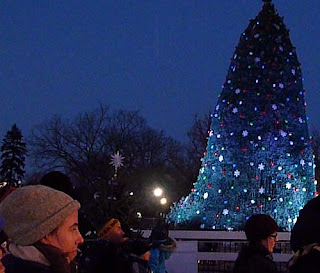 So we waited for the dark to settle, the temperatures to plummet, and the president to show up. They started playing music for us about 4:30. The president showed up around 5. All in all, we did quite well.

I think they ought to have more ornaments on the tree, though. But that's just me. If you've ever seen my Christmas tree, you know I am not being facetious. 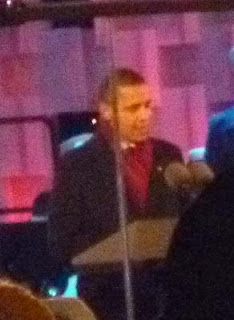 WE GOT TO SEE THE PRESIDENT!!! 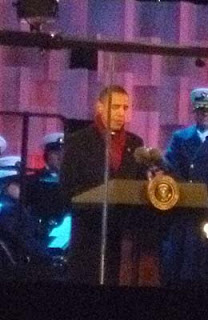 When one sees a president, one is required to cheer loudly and take lots of pictures, and hope the zoom on the new camera works. I think it did pretty well. The film I took looks amazing, better than the photos, even. 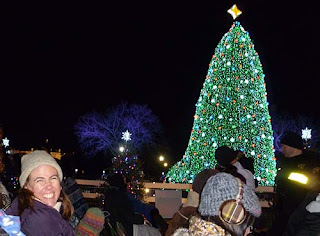 They lit the tree around 5:15, which made us very happy, because we didn't feel obligated to stay. Did I mention it was cold?

And it was pretty awesome, too. It just comes right on, and we were suddenly aglow! What was also cool was the whole First Family lights it, including the First Grandma. And since we were also there with Grandma, we definitely appreciated that. 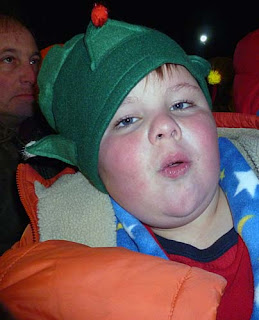 Joey did fabulously. We did have some games for him- a little handheld and my iPod (he loved tic-tac-toe and loves Angry Birds). He didn't even need his earphones.

Considering he sat in a car for an hour and a half, then in a line for half and hour, then in a seat for almost two hours (after walking calmly through a metal detector!), and then into a show that didn't really interest him until Santa appeared, I think he ought to be sainted for his behavior. He did awesome. 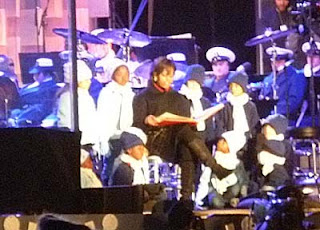 The First Lady read The Night Before Christmas, and that was fun for the guys. The little girls are adorable. I believe the other kids are from military families. 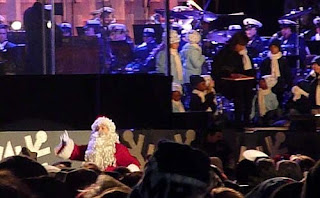 And did I mention Santa showed up? 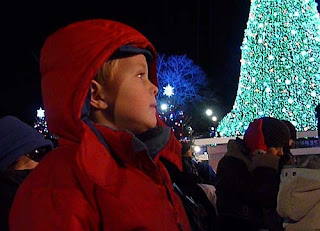 This is Andy watching Santa. He also did great. They were both so patient and so, so, so good.

Before the show started, Andy discovered it was warm under the blanket, so he was playing under it and under the chairs like a little tent. He was adorable. 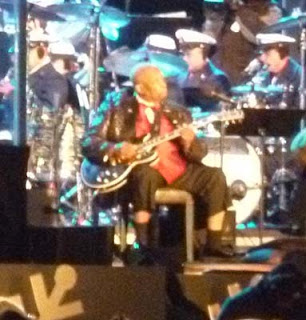 We watched B. B. King perform, then decided the boys were tired, cold, and hungry. And we were tired and cold. Did I mention it was cold?

So we bid farewell to our beautiful and adorable and wonderful Stimey, who I didn't get to really talk to much, and made our way to the exit. Only they had closed all but one of the exits, and the open one was not the one we entered through, so it took a long time for poor JoeyAndyDad to find us and pick us up. (He drove us up so we could get really close, to help out my mom). That was a bit of an adventure unto itself. But he did find us eventually, and we did thaw, and we'll see how the boys are feeling in the morning. 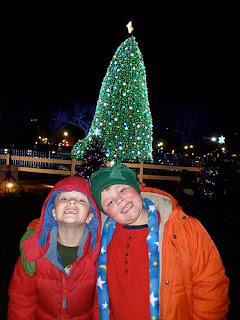 Overall, we had a wonderful time. How many times do you get to see the President and the lighting of the National Christmas Tree? And we got to see Stimey on top of that! Woo-hoo!

Merry Christmas!
Carefully crafted for your viewing pleasure by Joeymom at 10:46 PM 1 comment:

Watch us on TV!

Carefully crafted for your viewing pleasure by Joeymom at 9:25 PM 3 comments:

Wordless Wednesday: The Holidays are coming! 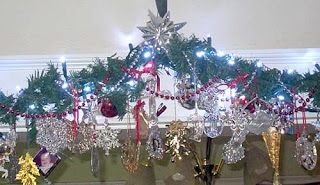 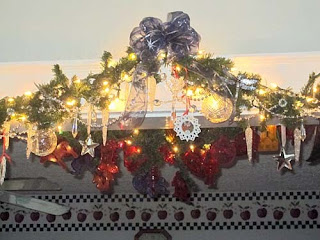 Carefully crafted for your viewing pleasure by Joeymom at 8:36 AM No comments:

Yes, I got tickets! Woo-hoo! We are going to go see President Obama! I am SO excited!

Of course, it's going to be the coldest December in years. Oh, and I already think D.C. is the coldest place on earth. And Security opens at 3, we have to be seated by 4:30, and the show doesn't start until 5. And I have an autistic child.

How does one get Joey through all that cold and waiting? What if he is overwhelmed by the concert, the crowd, the waiting?

So I am packing my special Success Kit:


Anybody else have suggestions for the kit?

I hope they sell hot chocolate once we're there.
Carefully crafted for your viewing pleasure by Joeymom at 11:58 AM 3 comments:

I sit in a room full of parents, their children with various issues, various diagnoses, varying degrees of functionality and challenge, in a place where improving functionality and overcoming challenge is the goal. The clamor of chatter bounces about the room, parents trying hard to connect with other parents, sharing what works, what doesn't, what they see and how they feel. Certain refrains reach my ears.

"Once I took the gluten out, everything was better. He even looks at me now!"
"Oh, no, my child isn't autistic. He has PDD-NOS. It's a developmental delay."
"All those chemicals in vaccines! She's recovering from measles now, it wasn't so bad. How long? Oh, it's been about... eight weeks now. The school is starting to get fussy, but I don't want her to over-exert herself in PE..."
"The vitamins have been really helping! You should try it."
"Well, he focuses well enough when it's something that he likes. He'll watch that train in the grocery store for hours if I let him. He just doesn't like his schoolwork. What kid does?"
"The tae-quan-do has been amazing. He is so respectful now!"
"They want to teach her to sign, but if she signs, she won't speak, and who understands sign language in the real world?"
"I had to pull her out of school. It just wasn't working. Nobody wanted to really help, they just wanted to stick her in with a bunch of stupid special ed kids and let her rot."
"They want me to put him on meds, but I want him to learn to cope without them!"

They do what works for their families. And whether you agree or not (or I agree or not) with the comments I was hearing, or support their approaches or not, or wonder more about these children and wonder why these comments might have stood out in my head from the other jabber in the room... these are hard-working people, doing the best they can in a hard place.

I remember when I first found myself in this world of special needs and disabled children. I was shocked to find how I started off in a place of such utter ignorance. I'm an educated person. I had no idea. To find I had to come to terms with the needs of my child and the changes in my own life, that wasn't easy, and it wasn't quick. To actually come to terms, that wasn't easy or quick, either. We did try things, we spent hours researching things we had heard, theories handed to us. We went through the agonies of self-doubt, self-recrimination, the ugly side of discovering life isn't going to be as you expected it, as everyone assured you it would no doubt be- provided you did everything right, having it go this way, the wrong way, was a slim and distant possibility. The attitudes towards special needs kids and their families- the ignorance and venom of people who have no idea what it is all about, what it is like, can be overwhelming. Add in the venom of people who insist you should believe what they believe and do what they do within the special needs world itself, and it can be crushing.

Often I find people in these waiting rooms who are just reaching those terms. They go on about things they've tried. When I disagree with their approach, I often smile and nod and say, "how interesting, I'm glad that is working for you guys..." and then go on to note the latest triumphs the child has achieved, leaving why I think that challenge was overcome deliberately vague. I'm not there to add to the crushing weight of constant judgment.

I might note what worked for us. And some of those other parents smile and nod and say, "how interesting. I'm glad that is working for you guys..."

And that's OK. We'll all muddle through. It's good to listen. Sometimes there are new ideas to try, bouncing about a room of jabber.
Carefully crafted for your viewing pleasure by Joeymom at 10:29 AM 5 comments: