The Good is in the Eye of the Beholder

Joey's school had an awesome end-of-year Beach Party yesterday. They had crafts, two moon bounces, an area for chalking up the sidewalks, a raffle, free drinks and snacks, and a DJ for dancing (who did an excellent job selecting music and being appropriate and silly). Party it up for summer! 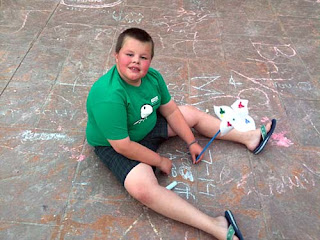 Joey enjoyed the chalk. He liked drawing Angry Birds and writing things like "I love Dad" and "For ages 7-12 with adult." Whenever it got overwhelming inside, he did a pretty good job of going out and bouncing or writing. He also made himself an ultra-cool Angry Birds pinwheel. Self-regulation win! Our only brush with a real meltdown was right at the start. There were some super-sized beachballs for the kids to play with, and Joey was playing with one. Some of the bigger kids came along and knocked it away from him so they could play with it all over the dance floor. Joey was, naturally, upset, especially since the bigger kids were not interested in letting him play, too, but were concerned with knocking it away from each other. Hence, the distraction of making the Angry Birds pinwheel, and our first trip outside to discover the chalk and moon bounces.

With the dance floor so loud, I was very pleased to see the school also have quieter areas for the kids to retreat to, such as the crafts and the outdoors chalk and bouncers. It worked perfectly! 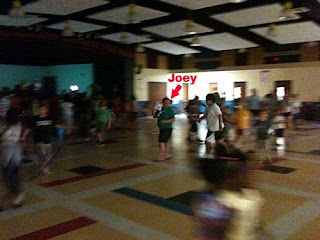 I won't say it wasn't hard to watch him, though. All the other kids were dancing, laughing, shouting at each other, tangling and mingling and getting into groups. There was lots of line dancing, which Joey showed some interest in but clearly couldn't keep up with (I may track down some of the songs and see if I can teach him the steps, though there was one called the "Cha Cha Slide" and that, when they told you to "cha-cha", the step everyone did was not a cha-cha, but a cross box-step. Kinda weird.)

Anyway, otherwise, Joey pretended the floor was sand and that he was a dunebuggy or a car, with his pinwheel as the steering wheel, and walked circuits around the dance floor, ignoring everyone (including his best buddy who followed him around trying to get him to dance). One exception- early on, about half a dozen little girls saw him, squealed as if he were a rock star, and joined into a huddle of hugging him. Over the course of the evening, these young ladies each did their best to get him to dance, made sure he met their parents, and often gave him hugs if they found him (and he's return the hug quickly before driving off).

I let him know that if he wanted to leave, he was welcome to do so. He did go outside a few times. However, he spent most of his time doing circuits in a room that was clearly overwhelming for him- dark with flashing lights, lots of people moving, and incredibly loud music. He knew his friends were there. He knew that is was a party, and he was supposed to be having fun. He wanted to be there. He wanted to see his friends, and be part of the party. He did his best to cope and be a part of the party. 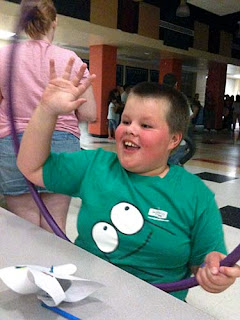 Towards the end, as he got very tired, he and his buddy grabbed a hula hoop, sat down, and pretended to be Porky Pig at the end of a Looney Tunes cartoon. They laughed. They enjoyed themselves.

I won't say it wasn't hard to watch him doing circuits when everyone else was dancing and interacting. It was hard to see him ignore the world and be alone in a sea of people.

But he had friends, who tried very hard to include him. They were happy he was there, and he was happy to see and be with them. Joey had fun. He was happy. His way.

We are SO going to this thing next year.
Carefully crafted for your viewing pleasure by Joeymom at 9:03 PM 2 comments:

Took Andy to the Virginia Renaissance Faire this weekend. Joey didn't want to go. He was worried people would chase him. Andy and I had a really good time, though! 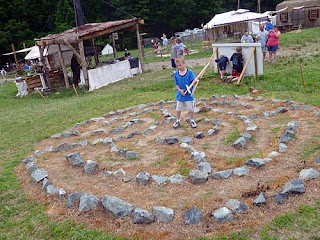 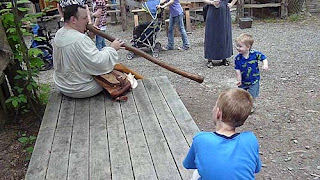 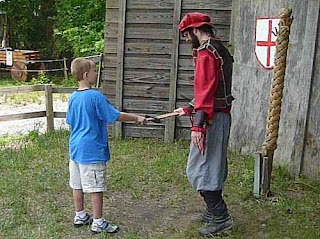 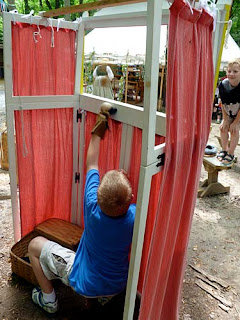 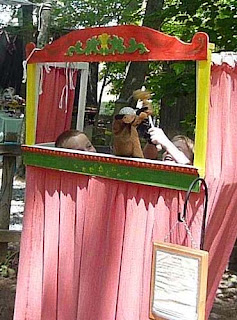 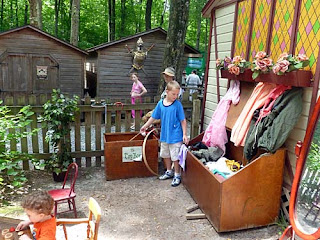 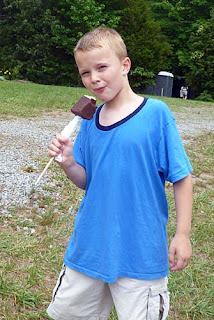 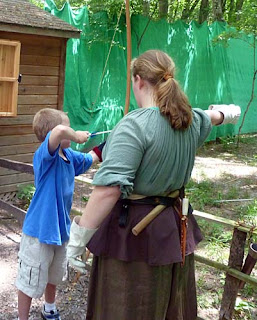 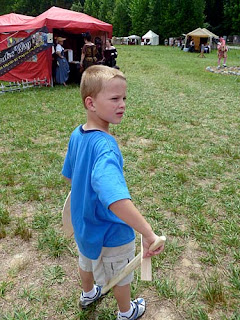 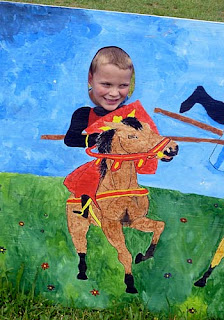 Carefully crafted for your viewing pleasure by Joeymom at 9:09 PM 2 comments: