Carefully crafted for your viewing pleasure by Joeymom at 7:36 PM 2 comments: 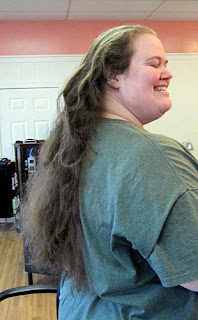 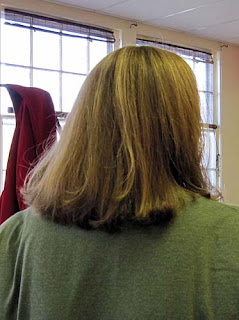 So about every, oh, two, maybe three, years I manage to get to the beauty shop. When I get there, the first thing I do is chop off my hair. See, I have hair that grows like wisteria up a pine tree. So over once in a while, I cut it off and send it to Locks of Love. This organization helps disadvantaged children by providing them with prosthetics for hair loss (for example, when children are going through chemotherapy, or when they have alopecia areata).

Once upon a time, one of the children attending therapies at the practice Joey had for OT had alopecia areata. She was a darling of a child, and I always remember her mom finally had to pull her out of public school because she was being teased so badly. The child was seven years old. And though I will not invade her privacy by giving you her name, I donate my hair to Locks of Love in her honor. She was a strong, hard-working, sweet child who was a pleasure to know, and I am sure brings joy, intelligence, wit, and all other great things to all who know her. Those kids in the public school who gave her so hard a time that her mother felt compelled to take her out? They are definitely paying a price, even if they don't know it.

As we all try to learn and teach tolerance, we need to really emphasize empathy, and emphasize it from a young age at every opportunity. We are all unique- that is what makes living such a special, wonderful, fabulous adventure every single day of our lives, and beyond.

Locks of Love take all hair donations. With donations of ten inches or more, they can make the actual prosthetics they provide to the children. With shorter donations, they sell the hair and use the proceeds to support the organization and pay for the production of the hair pieces. The next time you head over to the beauty salon, please consider donating. Put your hair in a ponytail holder to keep it neat, place it in a plastic bag, and mail it to:

(They just moved, so be sure to use the correct address!)
They also gratefully accept financial contributions.
Carefully crafted for your viewing pleasure by Joeymom at 11:03 AM 2 comments:

The boys earned their trip to Chuck E Cheese! Woo-hoo!

We have a regular routine when we go to Chuck E. Cheese. We come in, and I have a couple of coins left over from last time to distribute while I purchase the new round of pizza and fun. Boys romp off to remove shoes and get playing. I order and find a table to act as Home Base, where I set up shop (including going and finding the removed shoes).

The boys then play until the pizza comes. Then Joey comes and eats pizza, while Andy flits from table to games and back taking fleeting bites of sausage and cheese. When the pizza is gone, we play a little longer, usually about 25 tokens' worth.

Then it is Prize Time. The boys put on their shoes and coats, we clean up, and we take our tickets and ticket slips to the counter. We pick out prizes, and go home.

It works really, really well. It is still a little odd to me to sit and read or write and not know exactly where both boys are at every single moment, but we'll all live through it. I do tend to sit in one of a select group of tables to make it easier for Joey to find me, and easier for me to play air hockey with him without having our coats stolen. It also happens to have the best and widest view of the floor, so I can look up at any given moment and make a good sweep to see where they both are. But anyway...

It was really crowded yesterday. Sunday afternoons are normally a good time, nice and quiet, but yesterday the place was loaded up with four birthday parties, and every seat in the house occupied. Madhouse. I ran out of spare coins before I got more, because the registers were down. People were everywhere. I had a ten-minute wait to snatch up a table (which, fortunately, appeared in my select group, yay!), so here came the pizza just as I got set up. Finding boys? Aye-yai-yai. Did I mention there were people everywhere?

When there are lots of people in a Chuck E. Cheese, one thing that mysteriously happens is the skee ball balls disappear. I don't know why. However, it is highly annoying to try to play skee ball without the full number of balls. The more tired Joey got, the more frustrated he became with the lost balls. And did I mention how many people were there? Crowds are not a good thing.

So Joey plops down across from me, his eyes starting to look a little teary and ready to melt, and he says, "Time for prizes!"

Um- hi! Remember me? I know, I have been remiss in my posting this week. We had a lot of unexpecteds, but nothing totally insane. Here I am. We live! We still have one fish, one snail, two cats, two kids, and an intact house. All is right in the world.

Currently, I have two little guys working hard to earn their last few stars, because they wan to go to Chuck E. Cheese something frantic. It is scheduled to rain this afternoon, so I am hoping they earn those stars sooner rather than later. Crowds are still titchy things for us.

Yesterday, we were at the park. One of Joey's classmates showed up, a very nice girl, we had seen her and her mom here and there all last summer, but never really gotten to speak with them. Joey and his friend juggled through playing, making concessions for each other so that Joey could call "Bonnogoes!"* as he liked, and she got to maintain her personal space. The mom was interesting. The friend isn't vaccinated, and they go to a pediatrician who offers "holistic practices" alongside regular medicine. She was surprised that I urged vaccination. She was surprised that I didn't think autism was caused by mercury and heavy metal poisoning. She was surprised that I thought Joey was autistic from birth. In other words, she thought I was crazy as the proverbial loon. But she remained pleasant (why get titchy with a lunatic?), then JoeyAndyDad and I took the two very tired boys home.

Andy has taken to hopping up first thing in the morning, running downstairs, and making sure the fish is still alive. Every. Day.

But otherwise, life goes on. I hope to spend this coming Friday working on the basement. It is kind of odd not have to write lectures from scratch every week, but I'll be doing some tweaking. I need to make some corrections in the online classes- typos and stuff. Looks like our Fearless Leader has finally figured it out, and I might have my summer and fall schedules this week (wow! I'll be able to plan stuff!). So we're chucking right along here. I'll try to do better with the posting and stuff.


*This is the soundification of "barnacles!" Joey has settled on, since he doesn't know much about Spongebob Squarepants- though apparently one of his classmates does.
Carefully crafted for your viewing pleasure by Joeymom at 11:42 AM 3 comments: