I often think Joey's life is kind of like this- waiting for us to see the big picture.
Carefully crafted for your viewing pleasure by Joeymom at 4:29 PM 1 comment: 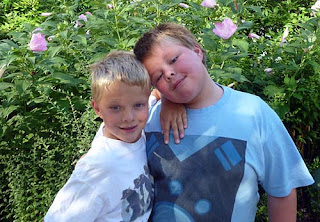 We had our Big Summer Trip today: the Aquarium in Baltimore! This is always a big adventure, because it is a long drive, then a trip through dark, crowded places, then an exhausting drive home. In the past, Joey has had trouble dealing with the dark, with the crowds, with the fish, and with the whole overwhelming experience. But this year, we have the return of Happy Joey- so we decided to give it a try. 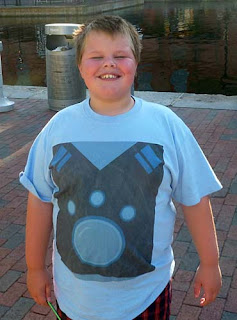 Joey was so excited to be going to the aquarium, he was up at 2 am, singing to me in bed. At 5 am, he was dressed and informing us (who were still in bed) that it was time to go to the aquarium. Yes, he was a little excited.

We left about 6, because we wanted to be there when it opened to mitigate the crowds. Also, we were technically going with Team Stimey, though I got to see Stimey for all of... ten minutes? And I think we had an opportunity to say about three sentences to each other. The Aquarium is an all-hand-on-deck proposition, and all hands were busy. 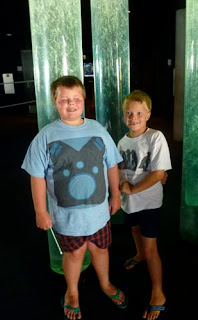 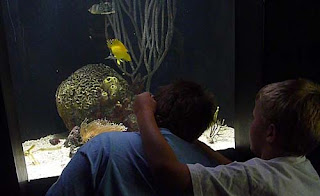 We tried at first to stick together, but JoeyAndyDad and I split up at last so Joey could take some breaks and Andy could go ahead and look at stuff and not wait around. Team Stimey came in behind us and we all met up at the top of the Coral Reef. Andy liked to get Joey's attention by grabbing his head or neck, and physically pointing Joey's face where to look. It was effective. 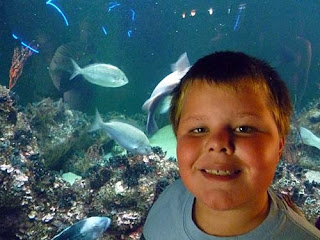 It was wonderful to see Joey actually looking at the fish, not just glancing at them. He would actually watch each case for a while, talking about the fish and animals he saw, noting that fish need to live in water (and couldn't come to his pond...) He was especially entranced by the octopus (no photography allowed of the octopus, but he was AWESOME) and the divers feeding the fish in the coral reef. He also liked to point out turtles everywhere. He was so interested, I am going to fish out some of the book I have bought him about fish and reefs and see if he will look at them. 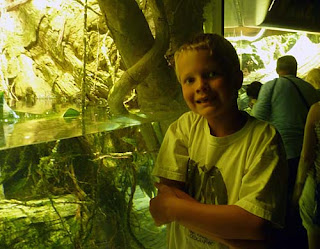 Andy liked the rainforest and the exhibits about the Amazon basin. There were alligators, rays, and lots of frogs. Even he wore out at last, though he wouldn't admit it- he wanted to go see the jellyfish and hang out more with Team Stimey (Andy loves him some Sam!) 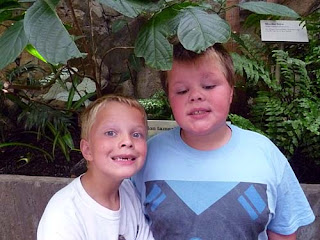 Andy was especially fond of the rainforest itself. HE saw it three times- once with Dad, once showing Joey to get him caught up, and one more time with Team Stimey, to get them caught up. He's fond of these open aviary type exhibits, seeing the birds fly and everything with no cage separating him from them. He also got to see a sloth and several nice tortoises. Joey was more interested in the parrots. 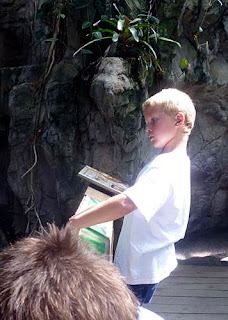 Andy even got to feed some of the birds- one of the staff gave him some mealworms to put out, and the birds came right up to get them. He was as happy to be able to actually touch mealworms as he was to have the birds come eat them. He saw the Wild Kratts feeding mealworms to aardvarks and was really interested in them, so getting to hold real ones was awesome. 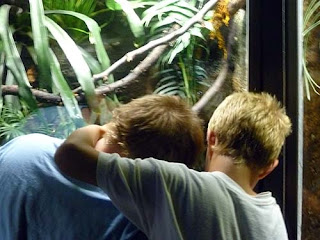 The boys liked the frog exhibits, too. For some reason, Andy was calling the yellow tree frogs "ninja frogs", but apparently this added to the charm. Andy also wanted to show Team Stimey the frogs, but mostly ended up fascinated by Sam by the time we got back to them.

Though I didn't get to see them as much as I would have liked, Team Stimey was awesome as ever. We had lunch at the (very expensive) cafe before attempting the coral reef. It was a nice place, because you could see the whole harbor, and watch the dragon-shaped paddle boats skimming about. Apparently there was also a "ghost boat" in the water, but I didn't see it.

Finally, it was time to hit the reef. It was feeding time, so there was a diver there talking about caring for the reef and the fish. As I was leading Joey around to see him, a wail went up- alarm! alert! Danger, Mom Robinson! 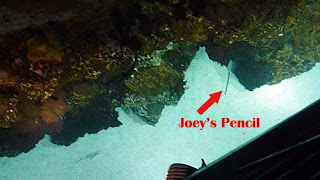 The problem was that Joey had dropped his totem green sparkly pencil into the water, and couldn't reach it. This was a calamity on several levels- Joey's totems keep him calm, so we really needed the pencil; and we were afraid the fish might try to eat it (or at least the eraser) and get hurt. Andy dashed over to the diver for help; and he kindly thanked us for letting them know so they could get it out of the water, and he sent one of the divers ho was feeding fish to retrieve it for us. 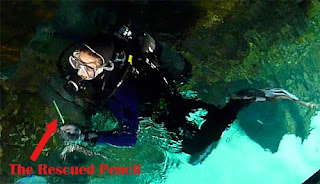 We got to see the diver swim over and rescue the pencil, very exciting. She handed it to Joey, who was ecstatic and thanked her enthusiastically. He then was very excited to see her feeding fish a few minutes later as we descended into the reef.

And while the boys were bouncing about, excited about the diver and the fish and the pencil and everything, Andy lost a flipflop. Yep, it fell right between the grate and the glass of the tank, and landed just about the lighted shark silhouettes- and out of reach. I got a staff member, who kindly went to get someone with a pole. He came back to stand with me while I waited, and apologize for the wait (I must have looked as tired and exasperated as I felt), and tried to make me feel better.

"Oh, don't worry, M'am; a few minutes ago, someone's kid dropped a pencil in the tank and they had to send a diver over..."

I had to tell him that was us. I think he got his laugh for the day.

In the end, the flipflop was retrieved, we went to see the dolphins, and all was well with the world. We were worn out, so we hit the gift shop and headed home. But hey, never a dull moment.
Carefully crafted for your viewing pleasure by Joeymom at 10:15 PM 1 comment: