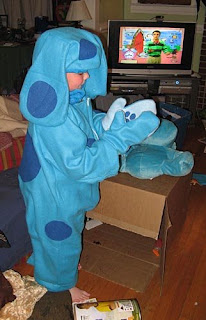 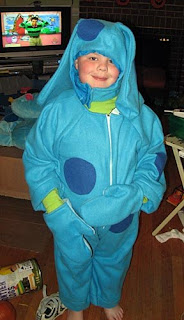 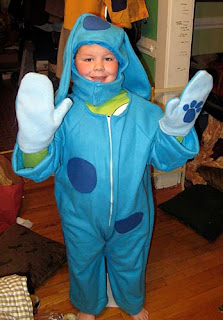 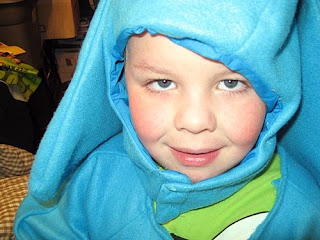 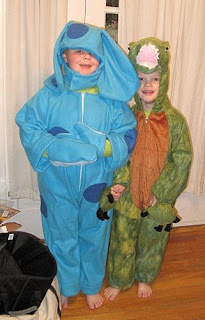 Carefully crafted for your viewing pleasure by Joeymom at 9:58 AM 7 comments:

My mom brought this clip to my attention, and all I can say is, You go, girl. Tell 'em like it is.
Carefully crafted for your viewing pleasure by Joeymom at 10:25 PM 3 comments:

What I learned today

For the last couple of weeks, we have asked Joey what he wants to be for Halloween. And he has said he wants to be a Little Bear. Oh, good, that costume is all made.

This morning, he gives me a funny look, and says, "I wanna be Blue!"

"You want to be Blue?" Signing Time is on the TV. No sign of Blue;s Clues anywhere.

"Halloween! I wanna be Blue!"

Excuse me while I attempt some Halloween magic.

Edit: A photo of the work so far: 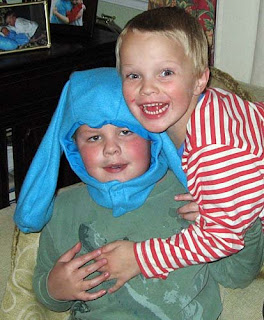 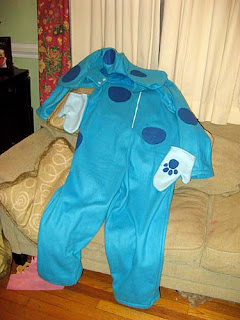 Perhaps not on the par of the Happy Kitty Cottage, but I hope it does the trick. I'll probably be doign a good deal of hemming in the morning- it looks big to me.
Carefully crafted for your viewing pleasure by Joeymom at 10:19 AM 3 comments: 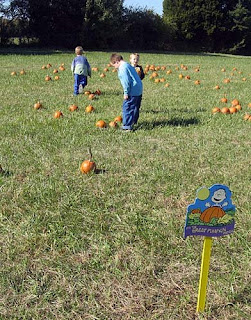 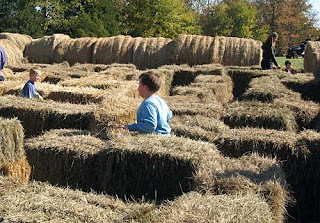 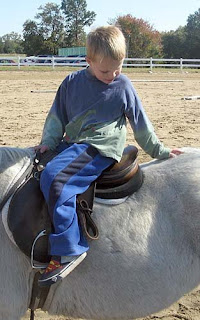 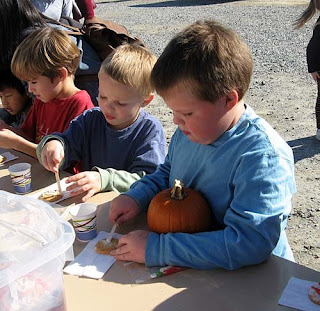 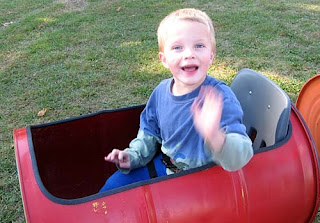 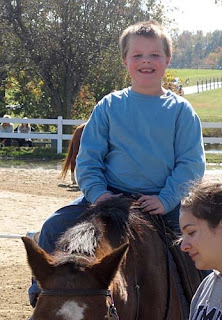 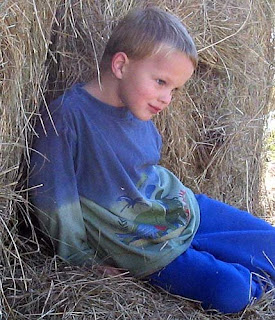 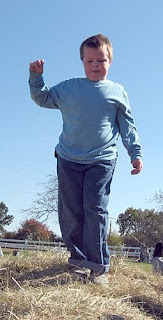 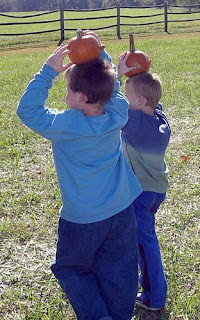 Carefully crafted for your viewing pleasure by Joeymom at 3:45 PM 1 comment:

One of the problems with relying on standardized testing to determine whether children are being educated is that "standardized" and "individualized" are extreme opposites. Even with non-disabled children, you learn more about their ability to take a test than any material that may be on that test. And I grade standardized writing tests for a living.

Joey is a whiz at math. Hey, its numbers, how hard can it be? Numbers, with predictable, unwavering rules and answers! No problemo!

Joey is not a whiz at language. He has a lot of difficulty with expressive speech, he has some issues with connecting events and scanning (just try to ask him to find anything, such as a toy he left in the kitchen).

Word problems can pose a challenge to all sorts of people with language and processing issues. The ability to analyze a statement and glean relevant information is something I have college students struggling with in my classes. However, in standardized testing,Joey will be expected to look at a word problem and come up with the answer. Just like that. It isn't that he can't do it- it is the time it takes him to do it. Not only do you have to answer correctly. Next grading period, he will also have to do it fast.

A little flashback: when I was in fifth grade, we took tests to determine which math and reading sections we would be in. Those of you who were not in the nerd crowd in fifth grade may not realize the consequences of taking those testing and ending up in the wrong section. You were already a social pariah; being a misfit even among misfits was like finding yourself a reindeer with a stupid glowing nose on the Island of Misfit Toys. It was social and academic ruin.

These tests were not just about getting the answers right- you had to get them fast. In the end, kids who finished the test, even though they got questions wrong, were rated higher than kids who got everything they did right, but didn't finish. So I, already teetering on the brink of Extreme Nerd-dom, was pushed over the precipice. Every question I answered was correct. I just wasn't fast enough. I spent the entire fifth grade bored to tears in the second-tier math section. It wasn't math that was the problem. It was processing and writing.

Meanwhile, Joey needs to learn to do word problems, or suffer the same fate, only worse, because what he really needs to do is be in the second-grade math class, not piddling about in some second-tier first-grade math class. But we have to prove it via standardized test- his classwork isn't enough. Especially when he is being assigned "P" grades* in math, despite his boredom.

So we (his case manage Mrs. Huff and I) swung into action, and called his speech therapist, Ms. Nikki, to help. And here is what happened:

Ms. Nikki, being a genius, explained to Joey that word problems were like little stories, and playing a game of "Blue's Clues." He needed to find all the clues in the story, put them together, and answer the question.

She then gave him some word problems, and showed him how to "find the clues", how to figure out how to put them together (creating the abstract equation- are we adding the numbers or subtracting them?), and then how to "answer the question" (such as "how many more..." or "What is the total...?")

Not only did he learn to do it himself by the middle of the session, he was having fun, he was proud of himself for figuring it out (he's really smart!), and he understood what he was supposed to be doing.

She gave him something to connect to, and understand what was expected. She used his love of reading (stories!) with his love of The Mighty Striped Man and his Blue Sidekick, and got him to really be interested in what he needed to be doing. I bet we have very few problems with those word problems- unless being timed gets him.


*In our school, the lower grades do not get ordinary grades. They get "S" (Satisfactory), "P" ("Progressing with Effort") and "N" ("Needs Improvement"). So this lady spent our meeting telling me how great he was doing and how bored he was with the math, then basically gave him the grade of "C" for his math. Huh?
Carefully crafted for your viewing pleasure by Joeymom at 10:13 PM 1 comment:

If the OT comes out and asks if she can make some weird, space-age slime with your son to take home, say NO.

Because he will put it in his pocket. And it sticks to fabric. And it doesn't wash out.
Carefully crafted for your viewing pleasure by Joeymom at 2:35 PM 3 comments:

A few pics to tide you over until I can find more minutes to write all about it. 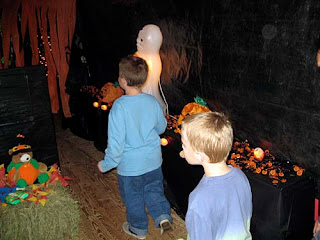 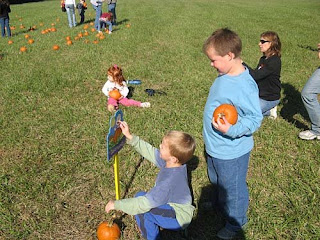 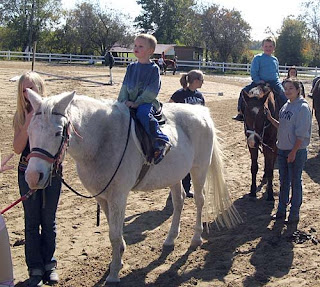 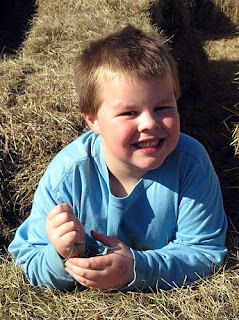 Carefully crafted for your viewing pleasure by Joeymom at 10:07 PM 2 comments:

What can i say?

So, after a glorious afternoon at Harvest Fest, we settle the boys in for the evening, and then to bed. Andy and I made up our latest installment of T-Rex and the Lizard Friends- they went to the Harvest Festival and had a really great time with the rides and the pumpkins and the haunted house and all.

Then my dear, darling son reaches over with both hands and starts kneading my boobs like bread.

"What is dis, Mommy?" he asks innocently enough and I brush his hands away.
"That's my chest, dear..."
"I like dem. Dey is squishy," he announces and he kneads them again.
"It isn't polite to squish a lady's chest, hon," I try again.
"But I like to squish them!" he protests.

I think I have cracked a rub trying not to laugh.


(***Stay Tuned for Harvest Fest post and pics***)
Carefully crafted for your viewing pleasure by Joeymom at 12:14 AM 2 comments: