Autism Understanding: Yet Another Day

Brother to Brother
Hand in hand
They wend down to the water
Across the sand.


I don't think there have ever been two brothers more loving of each other than Joey and Andy. There may, in this world, be equals, but none greater. It simply would be impossible.

I won't say they get along all the time. Their abilities, their challenges, their personalities, their differences preclude complete harmony at all levels and all times. Like anyone else in constant close quarters with huge amounts of trust between them, they bicker and fight and let it all out. But it doesn't cleave between them. They are brother to brother, always.

Even when they were very little, there was that understanding between them. Joey didn't let kids pick on Andy; he protected his brother, hugged on him, loved him. And Andy didn't let people exclude Joey. He stopped and explained the game, let Joey catch up and catch on. Andy is more of a dynamic player now, with less patience to wait for Joey to join in and catch on; but then, he's 8, not 18. And he almost always invites Joey to play- periodically, throughout the time at the park or wherever.

They were both out of sorts at soccer yesterday, no doubt about it. Andy was brittle, to the point the coach came over and asked for my advice (and he's ADHD, too, so he has some grasp on how to deal with ADHD kids). Joey was bored and tired and hungry. I knew I had a brewing disaster on my hands, and had called in the cavalry, but it was 20 minutes away.

Andy was scowling, kicking a ball back and forth across the field while the other kids were doing some exercises that involved jumping over the ball alot. It was an exercise he was not very good at, and that frustrated him all the more. It was time for intervention to bring Andy to a better place so he could participate. I moved to intercept him, and he turned midfield and started away from me. I waited. He turned to come back across the field in his pattern, looked up, and with a grumpy frown, pointed and grunted. A flick of my eyes to the bench where Joey had been, now empty, told me the issue. Now Andy made a louder noise, no words yet, but with more distress in his face.

"I can't go deal with him until you stop this unexpected behavior and do what you are expected to be doing," I explained calmly, but firmly. I knew Joey was headed to the bridge that went to another set of playfields, but there was a set path; I would be able to catch him without much difficulty. Andy, however, did not know the path beyond that bridge- and he took off at a run to catch his brother. Grumpy, tired, and irritable as he was, to him, Joey was in danger.

At least they'll now be moving in the same direction, was my initial, very tired and irritable, thought as I trotted after him. I didn't put on speed because I wanted Andy to catch Joey first. It was important that Andy, once alarmed, was able to feel like he did something. I learned that a while back. He needed to be part of helping Joey when Joey was distressed. It actually helps him to do something that seems useful, instead of having to cower in his room during a meltdown or stand in panicked indecision during a bolt.

And two minutes later, they came back across the bridge, hand-in-hand. I could hear them talking to each other about expected and unexpected behavior. Andy was upbraiding Joey for his "unexpected running." Joey was telling Andy he was "expected to be playing soccer now."

Andy went back to his team. Joey came back to the bench. And the world righted itself for a few precious minutes. 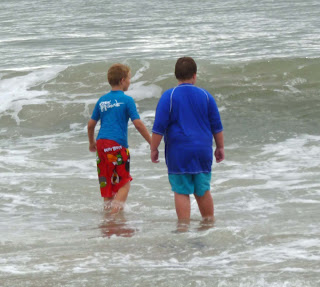 Carefully crafted for your viewing pleasure by Joeymom at 11:59 PM No comments:


There's nothing quite like watching Joey on the baseball field. When we first started Challenger's Baseball, Joey knew nothing about baseball. He didn't know how to hold a bat, what a base was, or even how to run- at 6 years old, he was still using a toddler trot. He took to it like a fish in water. There were high school baseball players out helping, people cheering, and holy cow, it's fun! Joey lights up on game day. His running and movement improves drastically between the beginning and end of the season (unfortunately, he often doesn't retain that progress out of season). He thanks the "big players" for helping.

Our local program has expanded to 8 teams, so the smaller and older players are now separated. Joey moved up to the Big Kids teams this past fall. Unfortunately, his best baseball friend is a year behind him, and so no longer on his team. He got to see her Opening Day. He was overheard telling her, "There is nothing more important than our friendship!"

This summer, I am going to again attempt a little program to help Joey connect with friends and think about them, even when they are not immediately present- through letter-writing. I thought I might even set up an email account for him, so he can start thinking about how to use it and learn the rules of email use and etiquette. Joey is so social, and loves to be around people so much, I am hoping it will make him happy to continue to feel connected to people, even when they are not right in front of him. I thought a bulletin board with photos of his friends might even be a good visual cue for him.

I'll keep you posted. And maybe, just maybe, Joey will, too.
Carefully crafted for your viewing pleasure by Joeymom at 11:02 PM No comments: