Well, Memorial Day has come and gone again. I've been married nine years. And it was a lovely, hot weekend. We took the boys to a picnic that my boss invited us to. taking Joey into new situations is always a fun challenge. This time, he ended up in the neighbors' yards, once just to defeat the locked gate (he was successful) and once because the neighbor had cool toys outside (he wanted to ride on a ride-on shaped like a bike- they were very nice people, and let him play with it for a few minutes before we dragged him back to the party, where he promptly melted down.) I know some folks think we shouldn't take Joey to new places and picnics and stuff. Certainly the other party guests were dubious. I still can't figure out how they expect him to learn how to deal with social situations without ever experiencing them.

Monday we just put both of them diaper-free in the back yard and hosed them down all afternoon. Then Joey got the hose, and hosed ME down. Then Andy grabbed a pitcher and started throwing water on me... It was HYSTERICAL. Two little boys with that twinkle in their eyes... "Let's get mom!"
Carefully crafted for your viewing pleasure by Joeymom at 1:28 PM No comments: 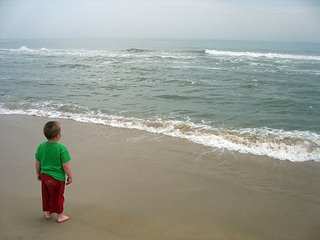 One of my acquaintences sends me regular articles on research being done about autism. Most of it pertains to the thimerasol problem, but today's is about the MMR vaccine. Apparently, some autistic children "with bowel disorders" get the virus used in the vaccine stuck in their intestine. The conclusion is that this may cause autism, because they are looking at children who appeared to be developingnormally up to 12-18 months, when the vaccine is given.

Ok, I'll take the possibility, but there are logical problems with the brief report. For one, there is nothing about non-autistic children with bowel disorders- do they get this vaccine stuck in their intestines? Are bowel disorders- or the bowel disorders they are noting- exclusive to autistic children? If they are, then couldn't the disorder being causing the autism? What about children who were not developing normally before 12-18 months? Had you asked me if Joey was normal when he was 18 months old, I might have said yes; but now viewing our home movies, the autism seems pretty obvious to me. What is causing the autism of kids who are autistic before they get the shot? Could those children considered to have "regressive autism" actually have just gone undetected, and the autism just started to become more obvious at this age, when the problems of autism start coming into play, because you start expecting things like communication, increased fine motor and gross motor skills, and increased socialization (and these things just don't happen, or start happening in abnormal ways)?

The other conclusion is that this supports a "causal link" between MMR and "painful gut disorders" in autistic children. This is more logical, and yet still correllational, not causal. Did those disorders exist before the shot, causing the virus to build up? Does the virus cause painful effects of any kind? These things aren't really addressed. Does it cause problems in non-autistic children with these "gut disorders"?

As someone still searching for the "why?", these types of reports aren't giving me any answers. I hope they are giving SOMEONE answers, because then we can do something for other kids who may really be being impacted by vaccines, but my kid wasn't. Is there anyone out there looking for the answer to our "why?"
Carefully crafted for your viewing pleasure by Joeymom at 9:08 AM No comments: