Joey has a lot of difficulty processing the whole idea of death. Already a tough subject for young people, this can be extremely daunting for Joey in understanding that life ends, and there is a permanence in death that he just cannot wrap his brain around. It becomes a huge anxiety trigger. 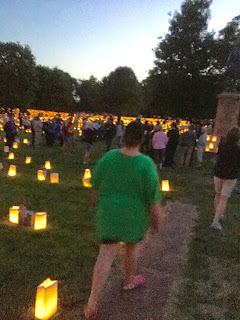 This is the 20th year of the Luminaria at Marye's Heights. I feel it is important for my boys to understand that freedom is not free. People die for their country, their families, their ideas. History isn't all cool houses, quaint costumes... and weaponry is not just cool toys.

Wars are real. And they effect everyone. 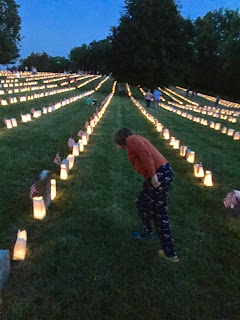 I had Allan drive us closer to the battlefield to save our energy for climbing the hill. It was a great plan. We made it up just fine. Joey was being Shy Guy for most of the walk to the gate; andAndy wanted to look at more of the plaques about the battle, and the Kirkland Memorial. Anxiety rose as we neared the gate, where the crowd was bottlenecked to enter the cemetery. We got through, and headed up. I was steady talking about what Memorial Day is, and then the Battle of Fredericksburg. We talked about the union soldiers likely reaching our back yard, but only about a block or two closer to the Heights. We talked about Gettysburg. We talked about how the site became a cemetery for soldier who died in the battle, with some burials for later wars. They liked the paper bags and the pretty lit walkways, and Andy wanted to know why some of the headstones were smaller than others, and what the number on the tops meant. We talked about each grave having 2 lights, because often more than one soldier was interred there, and it wasn't always known who was buried where. 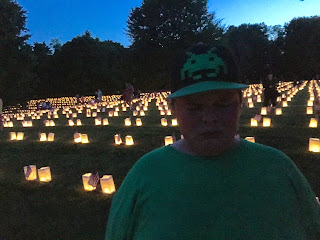 Then we reached the top, and both audibly gasped.

There are over 15,000 soldiers buried at Marye's Heights.

Joey understands that cemeteries are solemn places, and that when you see a sea of lights marking graves, he is supposed to feel sad. Confronted with that sea of sacrifice, he was sad. So we then talked a while about what he was seeing, and why it was important. Yes, it is sad. But it also important to remember, and respect, and think about what others do to keep you safe, free, and able to enjoy all the things of life. These were people who sacrificed their lives for their country. For all of us. 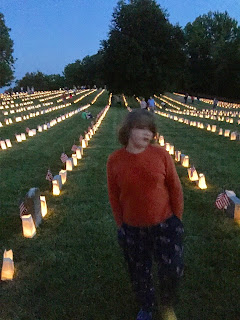 We also talked a bit about the Civil War, and why people were fighting. Andy observed that thinking people are less than human just because their skin is a different color is plain stupid. I must admit, I totally agree with him.

He wandered about the graves, looking at the different stones, the names, the numbers. He was upset when the light failed and he couldn't read the names anymore. As he said: "These are real people. We should know their names." I think he was bit sad that we didn't know all the names. Only 2,473 of the soldiers buried at Marye's Heights are identified in marked graves.

We had to step aside to let the bugler through, and he played a lovely rendition of taps. Both boys managed to stay silent through it. Yes, even Joey. We talked about that silence as a show of respect. 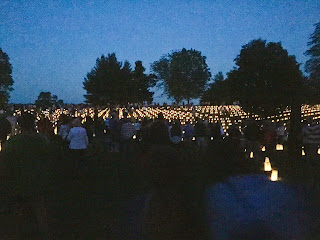 We walked home, two boys quieter than they were coming in. They have a lot to think about.

Carefully crafted for your viewing pleasure by Joeymom at 10:55 PM No comments:

Today is Ivy Day at Smith College, my alma mater. Yep, that one on the right? That's me... 22 years ago. 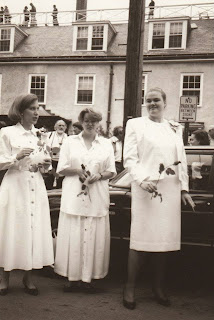 Want to hear something else funny? That dress was a size 18. I had difficulty finding it, because walking into a store and finding clothes in a size 18 was almost unheard-of 22 years ago. I loved LL Bean clothes, because they came up to a 20.
Yes, my friends, when people fuss about people being 280 pounds, that is what 280 pounds looks like. That is what we consider "fat" in this country.

I should note some other things in this little throwback. I had known the man who would be my husband about 8 months by this point- the beginning of the fall semester. I had never seen him. We played an online game together, but they were text-based then (I know, so quaint now, but it was awesome- like a living book, being written right in front of you! And you were IN it, and helping WRITE it! I wish people still played those.)

I was excited to start a new life in Wisconsin. How much colder could it be than New England? (Answer: A WHOLE LOT.) 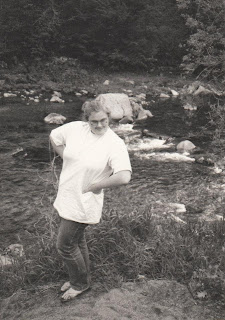 I was an odd duck in college, but not as much as I was in high school. Most of the folks around me were also odd ducks, which means, of course, they were powerful, awesome people who continue to be powerful, awesome people. I always think about all those awesome people, those women I went through college with, and am astounded that I ever knew them. 22 years later, these women run businesses, schools, libraries, laboratories, political offices. They are not just doctors, lawyers, scientists, writers, artists, teachers- they are among the BEST doctors, lawyers, scientists, writers, artists, and teachers in the world.
My life isn't exactly what I thought it would be. I had dreams of roaming around India, writing books about religious practices and history. I did manage to get to India, just not as long or often as I dreamed. I spend most of my days talking about art and culture, but not very often about the art and culture of India.

Most importantly, I have my beautiful family. It isn't the family I imagined, but the amazing, wonderful, beautiful roller-coaster of truth is harder, wilder, more vibrant, and more magical and amazing than I could have ever imagined.

Right now, my son is "forcing" my husband to eat chocolates. They are both roaring with laughter. And hugs. And wonderfulness.

I will say, I couldn't do what I do if I hadn't had the education and training I got, the friends I have (who are marvelously understanding), the skills I gained at Smith. I hate to think what would have happened to my kids if I didn't have those skills. The true value of a liberal arts education? You can go out and train yourself to deal with anything. You know how to learn.

Happy Ivy Day to all the new alumnae, and all my friends who shared in the wild years.

Carefully crafted for your viewing pleasure by Joeymom at 12:50 AM No comments: