Well, here we are, at the end of another school year. Andy is having a water party today; Monday he starts at summer camp, and will go to Hazelwild five days per week. Joey has next week off. I am making big plans for doing a bunch of space stuff with him. We'll see how that goes.

After today, Joey leaves the first grade, and starts with the second grade. This is unusual; school years in Virginia technically run September-September, so he should be a first grader for three more months. We are putting him in with second graders for the first leg of summer school so he won't get bored and will get used to the new level of expected work. I hope that goes well. He met the teacher already, but I haven't. But what else do we expect from our Excellence in Reading and Excellence in Math boy?

So this is my last breath for a week. I expect to be having a lot of fun with Joey next week, a rare treat, no matter what we end up actually doing. I think I need to repair their pool and make sure I'm ready to go with summer... here at last!
Carefully crafted for your viewing pleasure by Joeymom at 11:18 AM No comments: 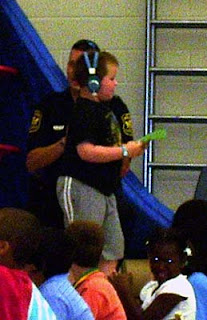 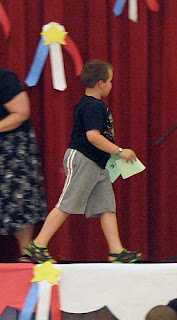 Yes, those are headphones. He's been having trouble with noise lately. Excellence in Reading and Excellence in Math! That's My boy!
Carefully crafted for your viewing pleasure by Joeymom at 11:26 PM 2 comments: 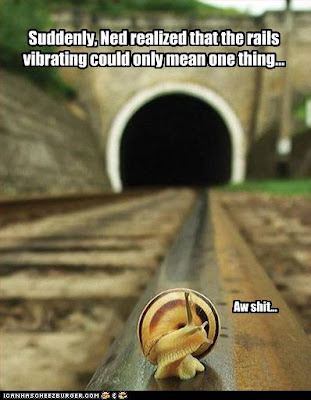 Carefully crafted for your viewing pleasure by Joeymom at 11:28 PM 1 comment:

Joey has a very interesting relationship with time. In one facet, he is utterly fascinated with it. Clocks are talismans for him, totems if you will. A room without a clock can be disorienting to him. He has been telling time since he was very small, both digital and analog. He will gladly tell you if your clock is digital or analog. And if the time on it is correct or not.

In some ways, this is very understandable. Joey loves numbers. Number and clocks are predictable; the cycles of the day mostly do not change. The ebb and flow of daylight is slow enough that it doesn't put him off, except for the spring forward and fall back of time changes. Six o'clock is six o'clock every day, and it is time to eat. Analog clocks have the added bonus of moving hands that move in circles, spinning about the clock face at regular paces.

Because of his fascination with clocks, he also is a stickler for schedules. When we first realized he had a team of 15 teachers and paras at school to deal with, we were concerned he would get anxious with all the changes. The reality is that as long as Joey know where he is supposed to be when, he's good to go. He get anxious when 1:20 arrives, time to go to math, and something puts off going to math.

He has also developed an odd habit of constantly telling everyone the time. When he was very little, and someone asked him a question, he would respond with a color. "What day is it?" "Red." "Where is your coat?" "Blue." "What is the capital of Sardinia?" "Yellow." "What is the average air-speed velocity of an unladen swallow?" "Green." Now, he tells you the time. "Joey, what happened in the story we just read?" "It's 10:42!" He also announces the time at (apparent) random (though I suspect he has reasons for barking out the time at that moment that we just don't understand yet). You can be going along in a lesson or conversation, and suddenly Joey will burst out, "Look! It's three o'clock!"

So powerful is this connection with time, I talked the tooth fairy into giving him a watch. He straps it on each morning, happy to have his little time-totem close at hand. I thought about getting him a pocket-watch instead of a wrist-watch, but I was worried about it getting lost.

Which brings us to the other facet. As much as Joey loves time, the concept of "past" is very difficult for him. This abstraction of time is something he struggles with, far more than kids normally do at his age. The symptoms of this lack of understanding are not all expected. Yes, he has a very difficult time with history and placing figures and events on timelines, or understanding these people are no longer walking around. However, it also means he has trouble with tense use (what is "past tense" to a child with no grasp of "past"?), trouble recalling events of the day, trouble connecting consequences with actions.

We have been working on this by showing him lots of movies and books of himself in the past. Showing him baby pictures, old video clips, clothes he used to wear. Our next step is to increase exposure to pictures of me, JoeyAndyDad, and Grandma in the past, when we were children, etc. If he can grasp that Mommy was once a little girl, we can start working back from there.

The idea of a past-less existence is one of the more difficult things in trying to understand Joey and his views of the world, at least for me. I suppose as an art historian, the idea of having no history is very strange. I know many cultures did and don't have an idea of historicity, the past is unimportant, the future is no significant, because the now is eternal; but that is not my own culture. We live in a world where Barbie dolls are kept "mint in the box" to be collector's items, instead of given to kids to play with and be destroyed by use. Nostalgia is a marketing tool.

With his close affinity to time, we hope we can use it as a tool to understand "past." Then we can move into the idea of "Once upon a time"... well, maybe I'm getting ahead of myself.
Carefully crafted for your viewing pleasure by Joeymom at 10:42 PM 2 comments: