Thank you, Rachel, Leah, and Alex.
Carefully crafted for your viewing pleasure by Joeymom at 10:14 PM No comments:

So we met up with Team Stimey today at Wakefield, the birthplace of George Washington and site of the Great Turkey Adventure. My guys were very very excited, because I had told them they would be meeting three new friends: Sam, Jack, and Quinn. Joey has been very happy about meeting his "three new brothers!" Andy was just ecstatic we were going somewhere and were going to be with other boys. 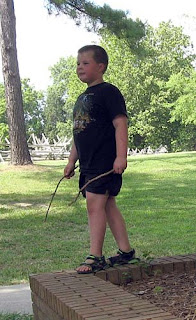 We had planned a post-lunch extravaganza, but failed to take into account two important things: one was our appointment this morning with the psychiatrist to discuss Andy; the other was that it was Fourth of July and poor Stimey had to drive through holiday traffic. We managed to get there all the same, and meet up for our tour of history. 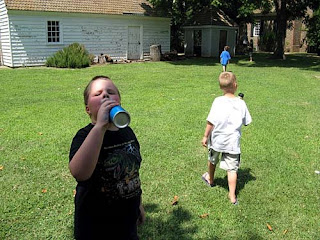 Stimey, Alex, Sam, Jack, and Quinn (Team Stimey!) are, as you all know, completely and totally awesome. But until you meet them, you have no idea how totally awesome they really are. For example, Stimey remembered to pack cold water for each of her three boys. How totally awesome is that? No, wait for it... she gave two of the bottles to my boys (I didn't pack water because we usually just do our circuit and get something to drink at the end). And she did not even complain once when my boys completely drained both bottles, leaving her three with a single bottle to split between them. Oh, and she brought pretzels, too, which my guys promptly snarfed. 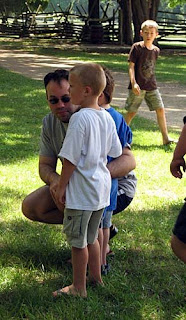 Alex is totally awesome, too. He had a knack for finding cool stuff to show the boys, like a bee hive, and a rabbit skull, and animals. (Sorry about the beaver, Alex. That was all my fault.) He also had a knack for keeping up with little dudes while Stimey and I looked for strays, usually Joey and Quinn. When we had the little dudes together, he scoped out coming attractions. 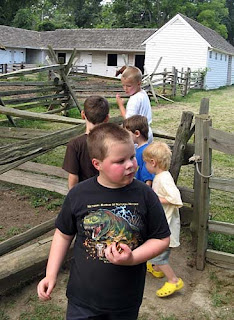 We were pleased to discover that Team Stimey likes animals as much as we do, while still liking history about as much as we do. Which means the boys were enamored with the animals, and Stimey and Alex wanted to see the house, even though the kids found it a little boring. All of the animals were in pens today, probably because there was a huge crowd for the Fourth Weekend (a whole two dozen people! Very exciting! We actually had to share fence with a couple other families!) 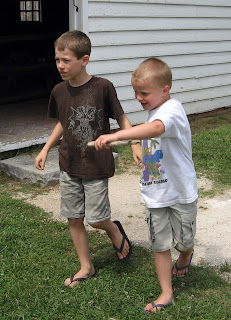 Did I mention that Andy and Sam turned out to be bosom buddies? Andy was delighted to have a new friend, especially a slightly older, and therefore totally cool, friend. He has made a picture for Sam already, and insisted we call Sam, and he was bitterly heartbroken when Team Stimey didn't come home with us to live forever and ever. Oh, and he was upset that he forgot to bring Beavery and Blankie with him to show Sam. So Sam, here they are: 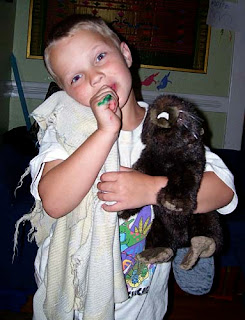 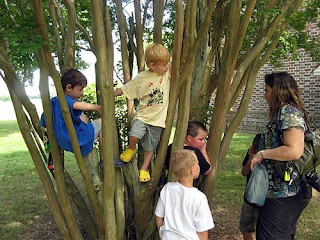 Tree-climbing turned out to be a great favorite activity as well, and fig trees can be really cool to get into. You could tell Stimey's kids were more practiced at the art of tree climbing than my guys. I need to get them into the woods more. 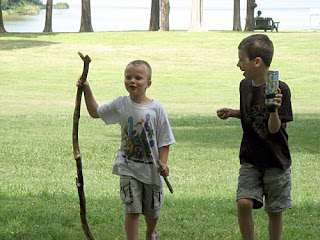 Andy showed off his adept stick-collecting skills, including finding this cool walking stick. Or wizard's staff. Whichever. So here's Gandalf and Sam walking up from the river bluff... In case you can't tell, Andy was quite in his glory, with a big new stick and his new friend. 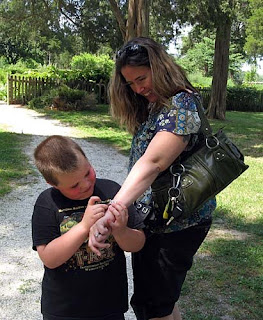 Joey was having a grand afternoon, too. He discovered that Stimey wears a watch. His afternoon was all set. Better still, he discovered he could set it himself, pulling the small pin and twirling the hands about to change the time and (even better!) the date. Joey did connect some with Jack, but once he found that watch he was all about Ms Jean and her wrist. 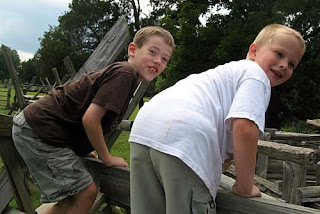 Andy and Sam remained bosom buddies, climbing the fences to see the baby pigs and the cows. There were quite a few animals out today, which is always nice, but no fowl. There must be a fox about again. And thank God, no turkeys. In fact, they had the blacksmith shop open and the living history going, so we got to snatch a few minutes of the talk about life as a colonial blacksmith. 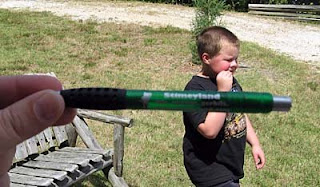 Stimey is so awesome, she gave me a Stimeyland pen. You know you are jealous, just admit it. I have one and you don't!!! 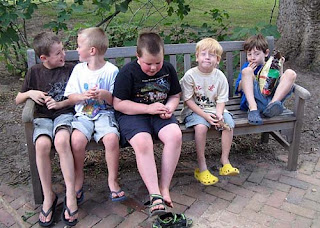 Thank you, Team Stimey, for a most excellent afternoon. We had a fabulous time, and can hardly wait to join in Camp Stimey another day. Maybe next time we'll convince you to come home and live with us. Because you totally, totally rock.
Carefully crafted for your viewing pleasure by Joeymom at 9:15 PM 3 comments:

Wordless Wednesday: Out of This World 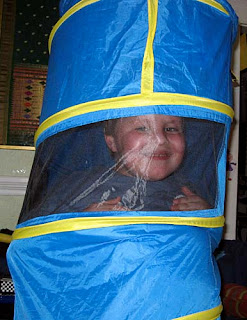 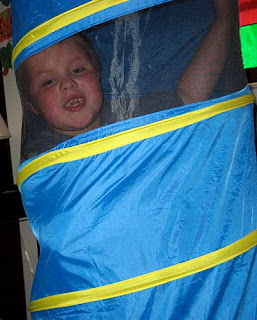 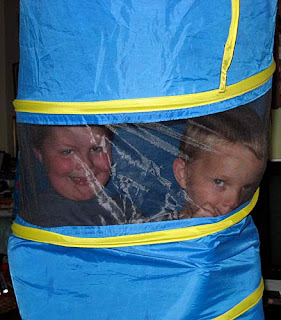 Carefully crafted for your viewing pleasure by Joeymom at 9:08 PM 2 comments:

We're having an interesting issue with Joey's speech therapy. He's been saying he doesn't want to see Ms. Nikki (his private therapist). Is this just part of him being tired from school and his tummy troubles, or are we seeing some therapy fatigue?

We're toying with the idea of going with a shorter session with a new therapist. Nothing against Ms. Nikki (who brought this to my attention and said she is not offended, it happens), she has really been working OK with Joey. Perhaps a new face, with some new things to do and approaches to try, will bring some novelty and fun back into speech therapy, which may seem too much like work as he gets older.

However, I think we ought to consider some of the other issues we have seen with the move to the new office. For one, there s now a mini-office in the therapy room- a desk with a computer and files and things. This computer has been causing a lot of headaches, and I think it is a serious distraction for him. The old rooms in the old office were just rooms, they didn't have the computers and things in them, and I think that worked better for Joey. Also, a lot of speech therapy seems to involve tables, instead of using the whole room and activity to promote speech. After sitting in school all day, Joey may not be too keen to sit around another room doing more table-top stuff for another 40 minutes.

One thing about the OT is though there is a general structure to the sessions (half fine-motor in the "small room" , half gross-motor in the "gym"), every session is a surprise. What will they make? What games will they play? What will they do? Our OT has a knack for trying new things, mixing up new activities with old favorites. There is a sameness to the speech therapy, you sit at the table and talk about what you did today, and work on asking and answering questions. This has been pretty effective, actually, but it may be getting old as he masters these skills in a basic way.

So what to do? Speech is a definite issue, and his oral communication is still seriously limited. His use of language still needs to be addressed so he can function and communicate with his teachers and peers. As nice as it might be to think the world will learn to speak Joey, its definitely not realistic. Right now, we're weighing the options, and making sure this isn't really about him just feeling bad in the afternoons; but I think a little freshening up might be in order.
Carefully crafted for your viewing pleasure by Joeymom at 9:00 PM 3 comments: 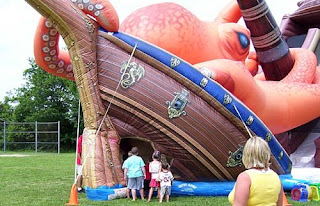 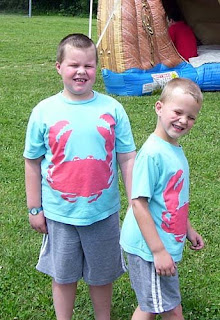 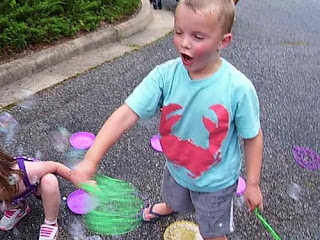 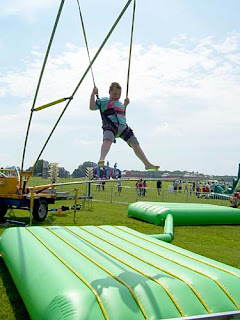 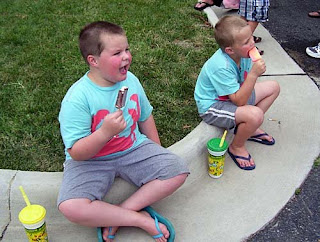 They had a great time, but got tired and finally melted. I think Joey could have stayed on that jumping thing all afternoon.
Carefully crafted for your viewing pleasure by Joeymom at 9:39 PM 4 comments: