Joey isn't feeling very well. I got the hint this afternoon after church, when we went to buy shoes.

This weekend is Virginia's "tax-free weekend." That means we instantly save 5% on everything we buy for school- supplies, clothes, shoes, etc. That may not seem like a lot of money, but around here, every little bit helps. And when shoes cost $50 a pair (holy frijoles!), and you've got two of them who are going to need shoes, that's a quick $5, before we start on anything else they need. So off to the shoe store we go.

Both boys have extra-wide feet, so the selection is limited where-ever we go. Walmart shoes don't fit them at all. Nope. We have to go to the $50 shoe store to get shoes on these feet. Great. And we still have all of two pairs to choose from. Fortunately, both are velcro. Joey picks out a pair that have those flashy lights in the heels. Good- those are the cheaper of the two pairs. Andy picks dark ones over light ones. Fine- we won't see them get dirty as quickly. Done. Let's get out of this madhouse of running, screeching children before I have two meltdowns on my hands.

Then Joey decides he wants to wear his new shoes out of the store. Nevermind that they are for regular school- a month away- and have already been boxed back up and bagged. He wants those shoes. Now.

Of course, it's really a problem of the noise, the heat, the change of schedule, the heat, the unfamiliar store, the heat, being tired, and of course, the heat. This is not about shoes at all. The store folks are very nice, and they know Joey, and they know about the autism, so as he begins the spiral into meltdown, they do their best to hurry things along to get me out the door... but it's too late. In his frustration, Joey bit me.

The biting is new- at least the biting of other people. He's picked it up from Andy, and I have no clue where Andy got it. Andy will do it if he feels in immediate danger or extreme annoyance, such as another child trying to snatch something from him. Joey does it with deliberation and thought. You can see the wheels turn and the decision being made, that half a beat of deliberate-ness that makes the whole mess seem that much more not a failure on his part, but a failure on mine. Somehow, I have permitted, and reinforced, this as an appropriate tool to get what he wants, or make himself "feel better" (I doubt he actually feels better for doing this, but before the action is done, it seems like a good idea to try it, if you know what I mean. Kind of like on a sunny day, it may seem like a great idea to go to the beach, until you realize the sand is burning your feet, the sun is burning your skin, and you forgot to bring sunglasses.) What's worse is I feel I have never tolerated this behavior. This is an instant-reprocussion situation. The full shop of parents glare at me as I pick up my 70-odd pound screaming child, toss him over my shoulder like a sack of potatoes, take his smaller brother by the hand, and march out of the store to the van.

I'm sure I'll get lots of wonderful critiques about that. Did picking him up and/or removing him reinforce the behavior? Should I have allowed him to melt down right there in front of the door? Is a time-out in a van really going to help? How does one correct such behavior, and what behavior can one expect of an overwhelmed 5-year-old?

And here is how I saw it: I made the mistake of trying to get the shoes on a day the store was crowded, the five bucks be damned. Once the mistake was made and the consequence in full swing, the appropriate course of action was to remove the child so that he could regain control and calm. Strapped into a car seat with the A/C going was the only option I really had available. There was no way, once Joey realized he had actually bitten me, that he was going to walk out of that store on his own two feet- the next action was going to be complete puddle of child, because meltdown was complete- about a level 4, if you leave the bite out of the calculation. But definitely meltdown- he was no longer functional. All my fault. I'm the stupid person who tried to take him into the crowded store to buy shoes, remember. On the hottest day of the year, no less. 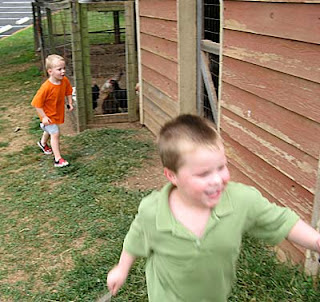 I'd go into what one should expect from an overwhelmed five-year-old, but I didn't like the hate mail I got last time, so I won't. (I got the gambit from "How dare you think/wish this child should behave any differently than he does?" to "How dare you let him behave that way?") I will say that these are the realities here. Five dollars may not seem a lot, but it is a week's worth of breakfasts. Five dollars is an extra t-shirt for school. Five dollars is 10 minutes of speech therapy (thank you, insurance, for finally kicking in!) Five dollars is a trip to the pumpkin patch. Five dollars is milk for the week. How many crowded stores have we been in, and out of, and not had a single whine from Joey? Hindsight is 20/20- better, when you find yourself constantly judged and found wanting.

Which brings me back to the beginning of this ramble, which is that Joey is not feeling well, and I know this because our trip to the shoe store ended in meltdown. We've been having more of those than usual, but not more than usual for summer, does that make sense? Anyway, they still can be those first little inklings of trouble. I wouldn't say he was grumpy the rest of the day, no more than usual on long car rides (we went to pet goats in Madison), but he wasn't right. Sure enough, we put him to bed early with a little fever. Poor little guy.
Carefully crafted for your viewing pleasure by Joeymom at 10:08 PM

Sorry to hear you guys had a hard time. Sometimes stuff happens. I don't see how it's your fault. We cannot design the world so that young kids never have meltdowns. That's not going to happen. And young autistic kids tend to have more meltdowns. Between you and them, you'll figure it out in the long run. Basically, as I see it, you shopping in advance for your kids, minding the budget, getting the kids out and about, and doing all the things that a good, organized parent could be expected to do, so I just don't see any reason to be down on yourself, quite the opposite in fact.

((Joeymom)). I totally get it; especially the bit about telegraphing being sick. Nik is that way; I can always tell before he gets sick that something is coming. Hope Joey feels better soon! Don't beat yourself up; like VAB said, kids have meltdowns. I know we have to be mindful of timing things "just so" and sometimes we succeed. Others, we feel bad but do it anyway.

It's too bad that other people feel they have to judge how you parent your own child. Unless you are harming your child, it is not their business.

And as for "How dare you think/wish this child should behave any differently than he does?" I wish that about all three of my children all them time, delayed and "typical". Who wants to deal with a tantrum in a store?

As for "How dare you let him behave that way?" What kid doesn't have a tantrum in a store? Each of my children has behaved so badly I've had to remove them from places. That's what (all) kids do. It's how they learn. And it's how they react to stimuli sometimes.

You know your kids best. You're obviously a thoughtful parent who wants the best for her children. Ignore the haters.

Just take care with those goats:

I'm a mom of new diagnosed AS 4yo (last month) and this blog is fascinating (don't know the right word without sounding too weird). My complete unawareness of the autistic spectrum has really gotten me overwhelmed and hearing from other moms experiences has been so helpful. My elder is a biter and the younger is picking it up (no asd traits seen in the younger but some major ocd issues in my opinion). Anyhoo, I can't even begin to label what I'm feeling other than gratitude that you all take the time to share.

Surgeon In My Dreams said...

You raise your children the way that feels best in YOUR heart.

Just found your BLOG today - I can tell I'm going to like it.

Even I feel Sorry to hear you guys had a hard time.

I think you have a very good vision of your kids life and I really appreciate your interest against your
kids.

Even I am like that. Still never stopped purchasing. I just purchased Timberland shoes from shoedeals4u.com for my kids.

Martin, I hope you don't mind me saying this, but your style of writing sounds *a lot* like Jordan in the book Jordan: Living with Autism and Multiple Complex Developmental Disorder.
Joeymom - Please don't blame yourself too much. Everyone makes mistakes. Today I'm babysitting my younger brother all day, and I made the mistake this morning of leaving him with nothing to do, even though I know that usually when I do that, he drives me to meltdown or semi-meltdown by making annoying noises and fidgeting. Today I managed to come down from the meltdown easier than usual, so that's good.

Wow, this was a truly quality post. In theory I’d like to write like this too – taking time and actual effort to make a great post… but what can I say… I procrastinate alot and in no way seem to get something done.
Nike Shox