The Cult of the Label

When I realized we were going to have a clear diagnosis for Andy, there were feelings I was expecting. Relief. Understanding. Anger. Even confusion. But I was not expecting to feel like a Diagnosis Newbie all over again. Having to start from scratch, digging up research, trying to track down solid sources and information, trying to understand what this new label was saying about my child, and what it was telling me he needs. Perhaps I am not a complete newbie, though; I certainly know there will be pitfalls and woo out there, and the first step to avoiding a trap is knowing of its existence.

There is the extra hurdle in ADHD of most the public thinking the label itself is woo. Well, that's just dandy, ain't it? Even among special needs parents, most seem to scoff at the ADHD label. Autism awareness is currently semi-fashionable, and when you say your child is autistic, it is becoming less and less common that you have to defend the diagnosis. With ADHD, it is fashionable to respond with comments such as, "Well... you know, I think so many kids are over-diagnosed these days..." or "What do you expect? he's a boy!" or "Well, most kids can't sit still for five minutes."

You think autism is an "invisible disability"? Try ADHD.

Most of the time, Andy comes across as an energetic, vivacious, happy little guy. Then you learn he's very short-tempered. But is it a disability? In most situations in public, does a child need the skills that ADHD kids lack? The problem is when he needs to be to sit, focus, and socialize in semi-closed but not adequately structured and very noisy settings- say, a noisy cafeteria. A bus. A classroom. Have you been in a "normal" elementary school classroom lately? If I was five or six, I'd have trouble with the distraction and explosion of sensory input, too. It's like the whole room vibrates with color, imagery, motion. Wow. How is Andy going to be able to sit and listen to a story with so much stuff to look at in there? Where does one draw the line between "distractable", "distracted", and "ADD"? Where is the breakpoint between "energetic" and "hyperactive"?

Because all of these labels are a matter of degree. Even autism. "Spectrum" means you can be there and not have it getting in your way (and hence not be "disabled")- it is only when it causes trouble that you need a label. Its a fine line between ability and disability.

A generation or two before my own, Andy's energy and vibrance would have probably been an asset. A kid on a farm who gets up early and can go go go just needs a little channeling and guidance, and few prompts to get them into the routine of farm living. My family grew tobacco back in the day (as well as vegetables for the DC markets). You have to get up and feed the horses every morning, or they get hungry. You have to care for the fields, or you go hungry. There was structure and expectations and a need for energy and wiry strength and quick intelligence. Andy would have blended in and nobody given him a second thought. Perhaps his room would be messy, and his inability to focus been mistaken for a little laziness, but the energy would have probably made up for it. Heck, my house is a disaster and I'm not disabled.

However, Andy is not growing up on a farm forty years ago. He has to be able to go to school and participate in circle time, walk in a line, eat with his friends, play in a gym. He has to be able to organize his belongings, get to his classroom, and complete his assignments. Listening to a story means you have to be able to sit still and focus on the teacher for fifteen minutes. These are now skills to survive in society. These are the kinds of skills ADHD kids lack. Impulsiveness is not considered a virtue, and is considered a discipline problem rather than a neurological problem (facts be damned).

Unfortunately, getting services without a diagnosis is like trying to get a cat to fetch a stick. 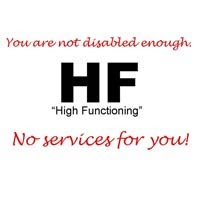 Carefully crafted for your viewing pleasure by Joeymom at 12:15 AM

I've copied this picture, there are a few people who need to see it, its ridculous, ignorance and prejudice never cease to amaze me!

I wish it didn't have to be som damned difficult for parents to get their children the supports they need...in or out of school.

Your point about how Andy would've blended right in forty years ago really struck me. I think that may be why we, as a society on the whole, are doing so poorly now; we've eliminated so many options and opportunities for anyone who is differently abled be it physically or neurologically. We've created such a narrowly focused way of life that there is no room for varied styles of learning or behaviors.

Let me know what you find as you continue on this journey,,,I have a strong feelng we may be facing something similar with Nik.

I totally get it. HUGS.

I totally get this. That sucks. It's tough enough to take care of your family without people questioning part of the base of that family. Hang in there.

When my eldest son was dx'd at 2.5yrs it was Mild PDD. Biggest mistake I made was going to the follow up appt 6mths later when he changed it to "speech and language delayed with global delays". The old boy Dev Ped (being retirement age) didn't believe in HF autism dx's.

School's comment "It's only a learning disability we don't have to do anything until Gr 3". YET, I received full funding etc from the gov't... only the school said "not good enough". 18mths later it was "A mild form of ASD" or verbally NLD w/ speach/language delay. Going into Gr 5 he "appears" normal, grades are good, social skills are good etc etc. At the beginning of Gr 4 I was offered a re-dx and I said "no". I need the OT. W/out Autism in the dx, no OT, no computer on his desk, no fidgit toys, no chair bands, no cushion....