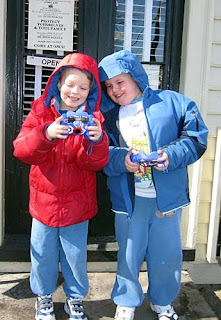 Living in Fredericksburg, you'd think there was a wealth of things to do. In winter, it is a little harder, as we don't have a lot of indoor stuff. Battlefields are, almost by definition, outdoors. We don't have nature centers or kid-friendly museums or anything like that. We have a lot of old buildings, loosely scattered over town, with various levels of restoration and kid-friendliness. But the boys are getting to the age when I would like to get them familiar with the history we have around us. After all, George Washington grew up here. 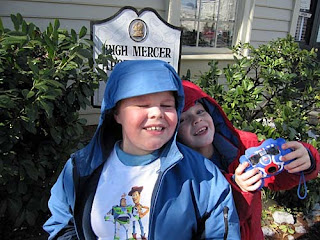 So we got out our cameras, and headed out to see some of the sights. I decided on a group of attractions that sit together- the Hugh Mercer Apothecary, the Rising Sun Tavern, and the library. Between attractions, they took a lot of photos of the street and the sidewalk. No, seriously- pavement and concrete are wonderful textures to photograph. 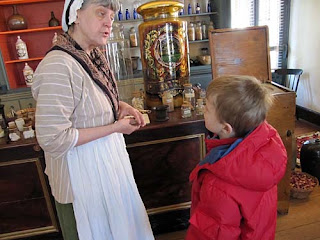 You aren't really supposed to take photos inside, but the ladies there were so nice! We didn't do so well with the tour, especially since there was another family there, so I pulled them back out to the front room, and the other guide let the boys ask questions about what made them curious. Andy wanted to know what was in the jars and wanted to know more about the big specimen jars. Oh, and they got to see leeches. Real leeches. 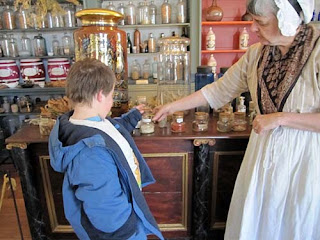 Joey was a bit out-of-sorts, but managed to show some interest in the jars and labels. He was happy to see one marked "marshmallow", but was confused that it was an herb, not fluffy white lumps of sugar (marsh mallow was used to sooth sore throats). 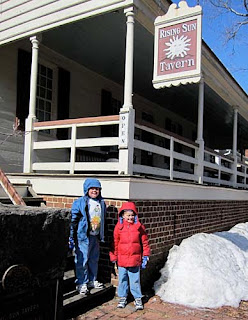 The tavern part of the adventure was less successful. Th girl there wasn't as creative, and then the other family showed up there (I don't think they were very thrilled to see us, having experienced our presence at the apothecary), and the boys were pretending to be dogs- so we had to move on, and we didn't even get to see the tap room. We grabbed some books at random from the library (no, really- they just kind of picked out two books that had pretty covers. They weren't in a be-quiet-and-focus mood) and headed home. I was hoping to fill up most of the day with our adventuring, but I didn't even have to worry about the two-hour parking limit on the street. We'll try again in a bit; as they become more familiar with the places, they;ll be more comfortable and listen better. But at $9 a pop per building for two kids and a parent, we'll definitely wait a little.
Carefully crafted for your viewing pleasure by Joeymom at 4:48 PM