We had a pretty good Halloween. 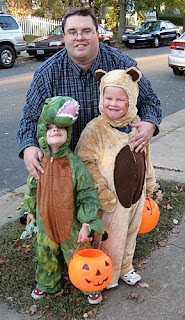 I had to work, so I missed most of it. But we got the pumpkins carved, and the boys went Trick or Treating pretty early so I could see them in their costumes. I think they were pretty excited. Andy practically ran house-to-house. Joey was just happy to be Little Bear. 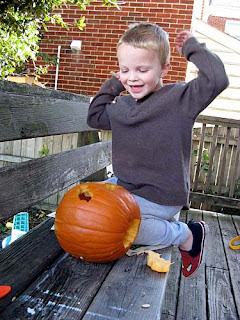 Carving the pumpkins is something of an adventure. Andy doesn't like his hands to be icky, but once Joey got home to do his pumpkins, Andy was all about it. Andy preferred the carving. We did a new thing this year, with cookie-cutter like things. You put the cutters on the pumpkin, then beat the crap out of them until they punch through. Needless to say, Andy was in heaven. Joey wasn't so sure, but he loves getting his hands into the pumpkin stuff. Since he usually likes clean hands, too, this love of goo is a real mystery. 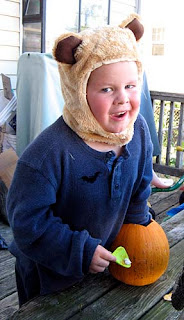 He insisted on his second pumpkin being a face like a "real jack-o-lantern!" so I had him draw out a face, and then he sat and instructed me as to the carving of his jack-o-lantern... triangle eyes, and a round nose, and a mouth just like a plastic light-up jack-o-lantern the boys were playing with. I usually use a lot of stencils to do pumpkins- simple ones. The complicated ones just never turn out nice for me. Simple ones do fabulous. 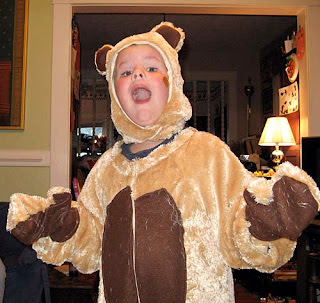 I wonder what to do now... do I pack the hood away, hoping to wear the costume next year (I had to pin up the legs)? Or do i let him have his Little Bear hood that makes him so happy, and hope it survives a year of use (and abuse)? Or do I race out to the shop, and try to get another round of fabric to make a new hood for next year? I have the feeling I will be in the fabric store in the morning... 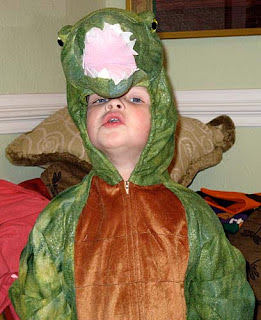 Just as Joey got to be Little Bear, Andy got to be T-Rex. Anything Andy thinks is scary or unknown, especially things with bones, is a "dinosaur" right now. There were some scary decorations up at the gym, and he was fine with them, as long as they were dinosaurs. I didn't disillusion him.

Yes, one Little Bear and one T-Rex. My children's true selves emerged as they danced up the street in search of chocolate and lollipops...
Carefully crafted for your viewing pleasure by Joeymom at 11:08 PM

We kept ours short and sweet [double asthma]. You're right about little bear! Too sweet. Mine would never wear the 'head gear.'

The penny has dropped about 'acquiring candy' and some 'eating' has been achieved. [by 2]

Glad you had such a romp.
Cheers

Oh these look precious! I think a trip to the fabric store is *definitely* in your future!

They are sooooo cute. Love the photos!

Banging on a pumpkin? That looks like soo much fun.