Life is a Parade 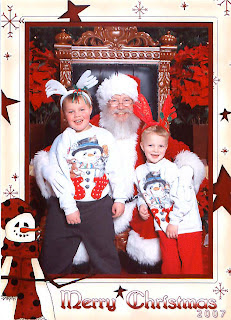 Busy. busy, busy... Christmas is a-comin' and the goose is gettin' fat! Yesterday we went riding around looking at the first Christmas lights. Today we saw Santa, in the flesh! And we went to not one, but two parades!

The boys did better than Mommy this morning with Santa. I called to see when Santa would be starting, and the lady told me ten o'clock. We got there shortly before ten, to find not a soul waiting... there was a breakfast with Santa event, and the pictures wouldn't start until 10:30! I was hot. Really hot. But we made it through, and actually got a decent picture of Andy. Woo-hoo!

Then we dropped Daddy off to do some Christmas shopping, and drove out to Grandma's to see the Spotsy parade. It was OK, but with only one band, Joey's interest didn't hold. In fact, he was pretty scattered and everywhere. Andy did OK.

Then we went to church- Andy sat right in the front row like a perfect little angel the whole time! Not even a flinch! And Joey got to play drums; then we went outside to the Fredericksburg parade. Joey, being his love-the-world self, made himself a friend; a nice lady who helped me keep him on the curb, and made sure he got candy, and even got him into her lap when he got chilly. Andy tried a cinnamon candy, but I don't think he liked it much, too hot. The parade was so long, though, we had to leave, after being there two hours and no end in sight. :P

So a happy opening to the holiday season... Merry Christmas!
Carefully crafted for your viewing pleasure by Joeymom at 8:46 PM

They are so cute and so happy! I think I might be lucky to get one kid on Santa's lap this year.

Love the pictures in your shop!!
Great idea!

Never got a photo of Charlie with Santa----great smiles and a great day all around!

Great picture with Santa! Sound slike you kicked off the holiday season in style. :-)