First, two boxes appeared on my front step, one for Joey and one from Andy, from Alivan's. We have no idea who they are from. Apparently, the person has specifically requested Alivan's to keep their identity secret. So if they are from you, thank you. The boys- and their mom- was surprised and it really made our day! 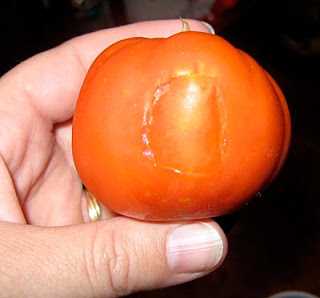 Then there is the Mystery of the Tomato. We finally have a tomato from our garden- a real one, from a plant we actually planted. I put it on the counter to ripen, and take with us to Grandma's today. We were having a "campout", which was more of a cookout with a tent on the porch. Anyway, I picked it up to pack it, and noticed these odd marks on it...

Hmmm. I wonder where those came from.

Meanwhile, Andy's new favorite phrase is, "I'm hungry!" He's still picky about what goes in his mouth, but at least food is now being eaten. In fact, I think if I let him, he would do nothing but eat. I am trying to take advantage of the new interest in eating to introduce new foods, but unfortunately, I think he would also spend this entire time eating Poptarts.
Carefully crafted for your viewing pleasure by Joeymom at 8:51 PM