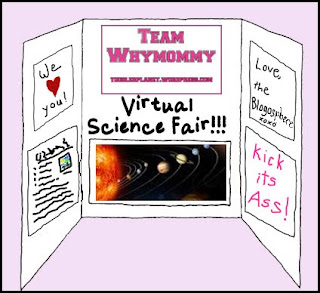 We support the Team WhyMommy Virtual Science Fair, because WhyMommy totally totally rocks, and we want her to know: we love you. Thank you for being an awesome mom and a cool person. We haven't actually met, but you've been a huge help to me and to my family. Thank you. 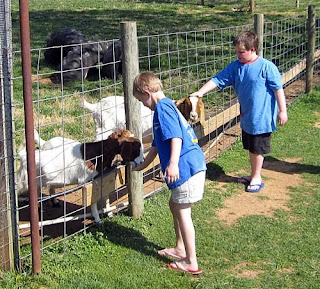 I had out some other experiments to do with my guys for the WhyMommy Virtual Science Fair, and we'll do those, but it may be Thursday. Or Friday. Or maybe next week. Because today was too beautiful to be inside doing boxed science experiments- it was sunny, it was warm, and the petting zoo called to us. Oh, and Yoder's Store. So instead of learning about magnets and stuff, we went out into the world and learned about some of our favorite things: goats, chickens, and ducks (and other assorted fowl). 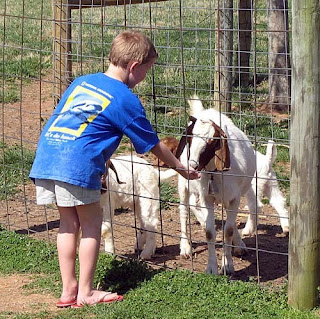 What did we learn today? Well, we learned that goat tongues stick tickle when they lick corn off your hand. We learned that baby goats know better than to get in the way of big goats when there is a prospect of corn involved. We learned that if you feed enough corn to the big goats, they get full enough that they make room for the baby goats. Oh, and Andy decided he really loves baby goats. That's my boy! 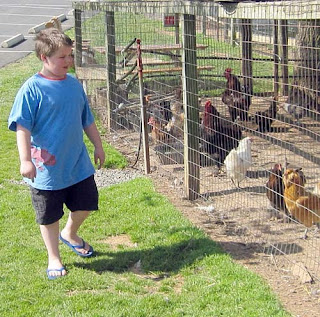 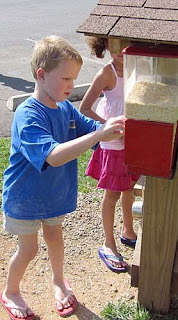 Andy learned that if you put a quarter into the vending machine, it gives you cracked corn. He learned that Mommy is smart enough to bring a whole roll of quarters with her when she knows they are going to go feed goats. He also learned how to reach into Mommy's pocket himself when she was busy in order to get a quarter. 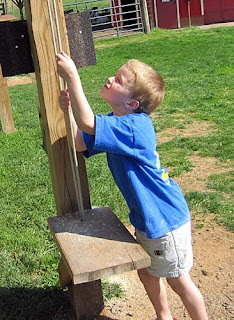 This place also has one of those fun goat ramps where you put the corn in a little cup and run it up to a platform where the goat awaits the feast. and get plenty of exercise and climbing in to get to said platform. Andy thought this was hilarious. My mom noted that a goat is supposed to eat about two cups of grain a day. The goat that braved the ramp while Andy was there got about two cups of food in about fifteen minutes. 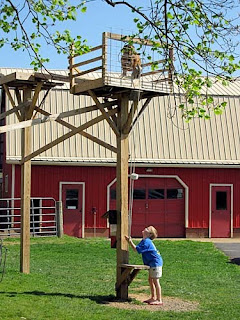 We did learn that you pull on one side to the rope to send the cup up, and the other side to bring it back down, so we got to learn about pulleys. Kind of. Sending the cup up and down was the most fun ever. I finally had to encourage him to go feed some of the other poor, starving goats. 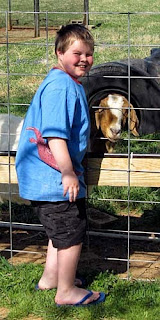 Joey is getting bolder about petting the goats and being near the animals. He loves animals, and he loves touching them, but they move in unpredictable (for him) and sudden ways, and that can make Joey very anxious. Today, he actually patted the goats' heads and ears without a lot of fuss, and held his hand steady to feed them without my help or prompting. That was pretty exciting, because tickling goat tongues on your palm can be pretty intense. Joey learned that some goats have soft heads and velvety noses, and that the noses of goats are not wet. 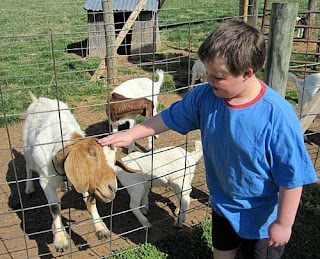 He learned that if you have a hand full of corn, the goats come over to see you faster. He learned that goats also like grass and chickweed. He was impressed that some of the goats had horns. He was very quiet and gentle with the animals today, not squealing and pulling back and making sudden jumps like he used to. We had zero tracking of the fences today! 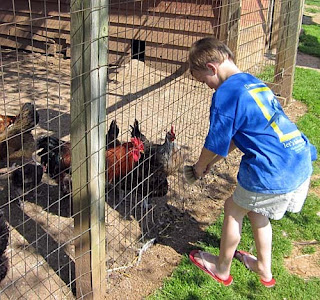 Andy learned that chickens are soft and feathery. When Grandma asked him what they felt like, he answered, "meat." I assume that means they felt delicious... (?) He was very excited to actually touch a chicken. He also had a look at the turkeys and pheasants, though they are harder to get good pics because of all the chicken wire (to keep the foxes out). My guys are still a bit traumatized by turkeys.

Hey mom, can I have another quarter? 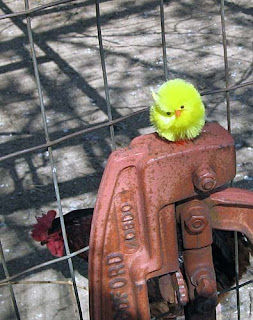 What fun in the name of Susan and the Team WhyMommy Virtual Science Fair! And can I just say that you totally rock for bringing a whole roll of quarters! Awesome!

Sounds like a great outing, and a wonderful way to honor Susan!

Musings from Me said...

Great post. Looks like the kids had fun. My son loves feeding the animals. We go to the Catoctin Zoo in Frederick from time to time.

Ha! I love how Peepie returned to his true home.
Certainly much better than showing up in a microwave!

WOW! What a fun--and exhausting!--day!

Love that you brought a whole roll of quarters--I always forget coins when I go!

What a fun adventure! I think it is so cool how you outlined all the things they learned on the outing. Kids are truly always learning!

Sounds like a great trip out. I am also impressed that you take a whole roll of quarters. Brilliant! I also didn't know (or didn't remember) that goat noses are dry. Interesting.

Thanks so much for taking part in the science fair!

Having fun is the best way to learn!