On the Emerald Walk 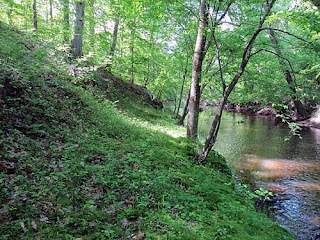 Some time ago, I mentioned one of the haunts of my childhood, a place we called the Emerald Walk. It is a stretch of bank along the river covered in moss, where I grew up. The entrance to the Emerald Walk was an outcrop of rock we scrambled over, and it ended just before the island in the river began, walking upstream. I spent many hours along this little stretch of bank when I was young, and the world moved more slowly, and life was a lot more lonely. 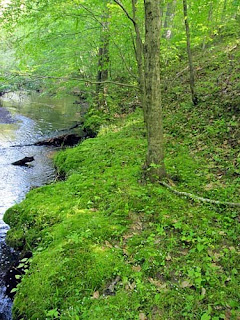 This was the world before widespread computers, before internet stretched into homes, before cell phones were attached to many ears. None of those thing, by the way, make the world less lonely. Just more noisy.

The world of the Emerald Walk was one where summers lasted forever, and you could spend whole afternoons stretched out on the cool moss and watch the leaves turn in the eddies, minnows flash through the current, river grass bob and sway as if in the wind, and if you strolled a little way down to the stream, there were frogs and tadpoles and fool's gold, and nice fine sand for making mountains that looked like melted sugar. The sun sparkled on the water and danced on the moss, filtering down through a shifting coolness of thick green canopy. Places like this are disappearing fast in a world that prefers Walmarts, cell towers, and asphalt. 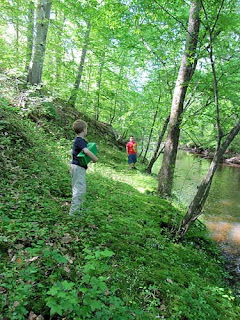 I took the boys to the Emerald Walk today. I wish I could say it was a glorious introduction to a world of peace, or at least boyish adventure, to my little guys. At least it was something new for them to think about, a place that, to me, still spoke of dragons and fairies and all manner of wonder. 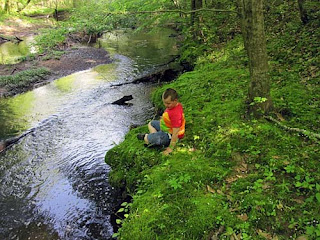 Joey did discover the joys of throwing things into the river, including a few clumps of moss. He howled at having to deal with the saplings and brush and steep slope down and up, though. I need to recut the old deerpath down to our old starting point, so that the descent to the river is a little easier. They could then enter as we used to, by way of the rocks. I'm not sure how well Joey will rock-scramble, though, even at this rudimentary level. I also couldn't convince them to actually step into the water. 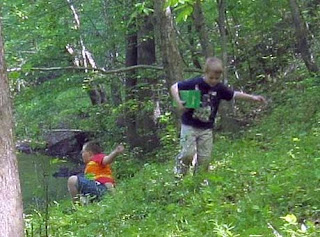 They did do some playing, too. Andy brought his box of plastic frogs with him, in anticipation of finding real ones, and real tadpoles. And Joey threw things into the water. Perhaps they did recognize a little of the magic of the greenworld, after all. At least so long as we weren't scaling the steep slope or having to press through brush and trees and slippery leaves. Or walk through spider webs. 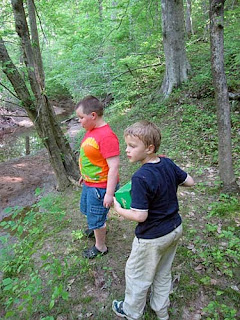 It might have helped if we had actually found some pollywogs. Although there were many, many changes to the river- there always are- there was still a nice spot in the stream for a tadpole nursery, though we appear to be between clutches, or at the very start (where the eggs would still be small and hidden in the algae and stream vegetation). The boys did get into the spirit later, when I pulled out their wading pool on the deck, and they played "I'm an egg! Now I'm a tadpole! Now I'm a froglet! I'm a frog now!"* However, it also did not help for me to look down on this end of the bank, beyond the Emerald Walk, and realize all that green around our feet is actually poison ivy. 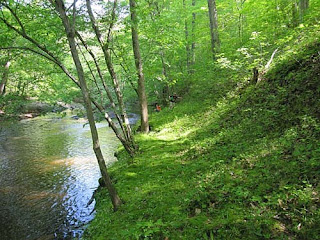 And I can't deny that seeing your children play in places you loved does hold some kind of magic, a look back to echoes of a past that now is lost. Or perhaps found.


*Yes, we thought of you, Team Stimey.
Carefully crafted for your viewing pleasure by Joeymom at 8:59 PM

Hi there...came across your blog over on Detritus!

What a lovely post and fab pictures. Makes me wanna take my boy (aged 10 PDDNOS) for a hike....we've lots of similar type walks here in the Emerald IslE! Must do that soon.....

Do you know that this is the second blog post I have read in the last 10 minutes that has referenced my tadpoles? At least I'm being remembered for something, I guess. :)

This place is gorgeous! And any trip to water that doesn't end in children soaked to the bone without extra clothes is a good one, in my opinion!