Yeah, I know, I suck at blogging these days. See, its summer, and well, there's this thing called life happening, and you know, I'm really really tired. And you know I'm serious when I'm so tired I am not whining online.

Just to give you a sample... 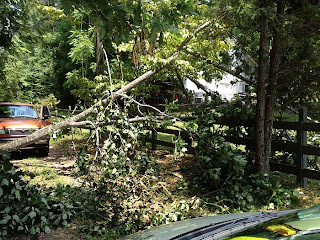 There was this storm that came through our neck of the woods, very suddenly. They were calling for scattered thunderstorms... no, wait, it was "isolated thunderstorms"... on Friday. The boys had been visiting Grandma after Joey's show and going to lunch. The cat got out, and we spent a long time trying to find him. In the search, and various other activities of trying to get the boys inside so they wouldn't scare the cat, the TV remote got misplaced. With no success finding either item, we scampered off shame-facedly and headed for the pool. A couple of kid swims later, we were trying to get food into tummies. The cat had returned, but the remote had not. A decision was made that it would not do for my mom to be stuck without her remote, so I returned to the scene of the crime to help find it. This time, I successfully located it.

Then we took a peek out the window. And it looked... weird. I decided to go home.

I had never seen a derecho before. I can tell you it was one of the strangest, scariest, most beautiful things I have ever seen. There was lightning in the sky, all different colors- but no sound. The flashes backlit the rolling clouds of the front of the storm, giving the sky a magnificent, rolling quality. Then the wind came. I was about halfway home, wishing my camera was good enough to record the splendor of it, when I had to take action to keep my van from blowing off the road. The wind moved straight across the road, making a sort of smoky haze from picking up dust and dirt from the parking lots of the stores at Four Mile Fork. Between the odd lighting and the sudden, odd wind, I knew something was seriously wrong. I briefly considered turning back to my mom's, but realized I was closer to home, so I pressed on. I picked the route more likely to be sheltered from that wind, because fighting the van was not what I wanted for another ten minutes.

By the time I got home, it was fully dark- because the power was gone. Everywhere, everything was dark... except for my block. We still had power, and it seemed like the whole rest of the city did not. It was payback time. We were one of three houses in my entire neighborhood without power after Isabel for nine days. Now, it appeared we were the only ones with power.

It is a good thing we have power. My mom doesn't. It looks like it will at least Sunday before they even start to work on her lines. See, years ago, when my very smart parents built our house, they paid a lot of money and had the lines buried. They did this because we were the last house on the line, and so if our transformer ever went out, we'd likely be the last priority of the power company. Add to that, we lived in the woods. The best way to take out a transformer is to have a tree take out your lines. Hence, bury them and avoid the whole tree thing. Yes, we had more power outages than most people, but they usually weren't very long. I don't remember ever having it out for days at a time. Then, along came some folks who wanted to build some homes, and the power company decided it was cheaper to run their lines from our house than to run it down the driveways of those folks. And none of those folks paid to have those lines buried, and so the company went on the cheap and strung them on poles. This, of course, completely eliminated the entire purpose of our burying lines, because now there were strung lines through the woods to these other houses. And whenever we have a mild zephyr, a tree falls on those lines, and takes out the transformer. And because there are only five houses effected, we are the last to get service and get our power fixed. And no, the electric company did not give my folks their money back for having the lines buried, thank you very much. Idiots. What many people have to say about PEPCO in Maryland, I could say about Dominion Power in Virginia. And it isn't pretty.

So we rescued my mom from the heat and have brought her to sleep on the couch at my house for the duration. Good news: Grandma is here, safe, and available for boy squishing. Bad news: I don't think my couch is all that comfortable for long stays.

Then came days like, say, today. Andy had vision therapy and OT appointments, so we ran to those. We had to stop by work to get caught up on payments and paperwork and stuff. That filled the hour between appointments. Then, my cat has been waxing all over the house, so she had an appointment today. The vet office doesn't have power yet, so they called and asked if I could come in earlier since they had to cancel a bunch of appointments because apparently those cats needed power, and my cat didn't. Now I needed to find my cat four hours sooner than I had been planning. So I drove home from OT with Andy chiming, "follow the barf, and find the cat!" (which I energetically quelled before we got home to the echolalic one). I found her under the kitchen table (thank you, Uncle Evan!) and managed to get her to her appointment. I was worried that her diabetes was revving up, but she had better blood glucose than me. Well, that's not saying much, but you get the point. We now think it might be a thyroid problem. We sent off the blood work and gave her a shot for nausea. So $267 later, I can say that it is probable that I will not awaken tomorrow to cat barf all over the kitchen, bathroom, or stairs. But I am not putting any more money in on that bet, thanks.

I got home to make lunch and referee the meltdown over Mario Party 9.

We then proceeded on our day's adventure: the Search for Fireworks. Yep, we live in a place where we can set off our own. Our challenge to find some free of whistles, as the boys- and I- hate whistles. Too loud and screechy. We have learned we cannot block the sound even with tomatoes in our ears. So we tumbled out of the car on a couple of unsuspecting fireworks stands with the question, "which of the big ones don't whistle?" I am pleased to report that TNT makes several fireworks without whistles, including Pink Diamonds and Hurricane, both of which I highly recommend. They also make a small one called Shark, which is very quiet.

We also recommend safe fireworks handling if you are settling off your own:
1. Have all fireworks ready to go before you start. Remove plastic or paper from fuses, have fuses upright and ready to light.
2. Soak the lawn area with a hose before setting up. The area should be 20-30 feet from the audience area and any other hazard, such as trees, bushes, or buildings.
3. Set up by creating a flat space on the lawn. A wide, flat board is good, and we prefer to place a couple of bricks on top of the board. Soak the board.
4. Use a long lighter or punk for lighting, so you can stay as far back as possible. DO NOT EVER HOLD A FIREWORK IN YOUR HAND.
5. Be sure to have a bucket of water at hand. Also, have a hose on and ready for use. Have a soaked board or long pole for knocking aside used fireworks and duds.
6. Keep the unlit fireworks 20-30 feet away from the lighting area, in the direction OPPOSITE the audience.
7. Light the fireworks one at a time. Remember that there can be a delay. After five minutes, if nothing has happened, you have a dud. Soak it with the hose immediately, and knock it aside with your pole. Soak it some more.
8. Light the fireworks one at a time. After the work is finished, douse it with the hose, knock it aside, and douse it some more before setting up the next firework.
9. Never let children touch or light fireworks. Ever.
10. Fireworks and alcohol do not mix. Never light fireworks if you are impaired by substances- including cold meds. You are literally playing with fire.

I have also seen suggestions to wear cotton clothing (it doesn't burn as quickly as synthetics). In our state, fireworks cannot leave the ground (no bottle rockets).

Anyway, we picked out some big ones, which always makes the vendors happy. Our local Knights of Columbus are highly active in supporting the local disability community, so we always get some from them; and a few other stands here and there selling bigger fireworks.

Then we stopped at the grocery to be sure we had ice cream and whipped cream and cherries for the holiday, and ran home to jump into our bathing suits and get to the pool before the bickering got to my blood pressure. Then I dunked them in the pool, brought them home hungry and exhausted, fed them, and send the bicker brothers up to bed. Where they promptly stopped bickering, since Mommy was not in the room anymore.

Oh, and I have classes going, and midterms to grade. Yay.

So, in begging forgiveness for the scant postings, I leave you with a picture of beautiful, wonderful, awesome boys, in a bicker-free moment. 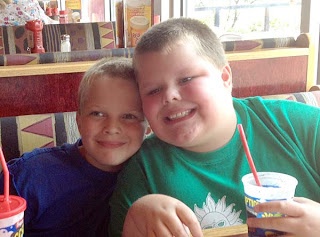 Now... how to keep them engaged tomorrow?

Carefully crafted for your viewing pleasure by Joeymom at 11:55 PM

OMG it is too hot to do anything other than swim outdoors!