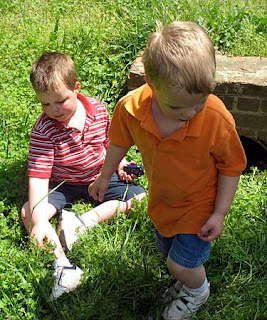 With a dose of allergy meds, the boys went to church this morning after all. The Sunday School teacher and I had a little chat. Apparently, they've given up on days when the director isn't here to be his aide, and he wanders about and does whatever. Not what I wanted to hear, but they haven't tossed us out yet, so we'll keep working on it. It would be nice to have an aide in there for him, because with his gum, he is able to sit and attend- but still needs a little reminding that the rules apply to him. They also now have too many kids in there to keep track of his sensory stuff, and having someone in there could make sure he got his vibrator or his gum or his chair cushion when he needed it, and teach him to get these things for himself. But he makes it through, he's in with kids his own age, and nobody's gotten hurt. So that's a good thing.

The boys were still antsy, so I took them out to Wakefield. This is a regular trip for us, I'm sure I've blogged about it before, but I'm no going to swim through right now to check, and for those of you who just pick up blogs where they are, I'll save you from wading as well. Wakefield is the birthplace of George Washington. It is a working colonial farm, with animals and everything. It's also a pretty safe place to let the boys run, and not a lot of people go there. So we go there a lot when the weather is good. I took some pictures today of things to make up a nature walk list, and while I was at it, I took lots of boy pictures and movies. They like seeing themselves on the TV, so I thought I'd make a little DVD. Besides, its calming. This is the calm before the week's storm...

We've decided that putting Joey into the speech and OT camps is the best option for him. Its going to be a little rough on me, and I have to figure out what to do with Andy (as in, what we can do together, not what shelf I am going to put him on), but if he can do intensive therapy this summer, maybe we can at least get him going with using his sensory book himself, make sure he can dress and undress himself, and do some other things in groups and independently, that will help him in kindergarden. I can also control his schedule better, so I can do the brushing and work on the oral issues (ie, get him to eat more foods). So this week I'm going to call up and say, "Since you guys were ammenable to this- this is what will happen." I expect them to promptly start having small bovines. If they don't, you'll be sure to know.

Because the boys can run at Wakefield, I end up taking a lot of photos of their backs. It seems strange for them to be walking on ahead like that. Most places, I have to have them firmly by their hands, so I mostly see the tops of their heads. At Wakefield, they run on ahead, checking out their freedom and the world around them. My boys get a chance to grow up a bit. 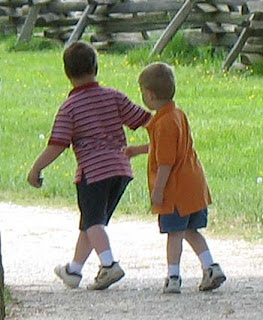 I like going to Wakefield. I think they do, too.
Carefully crafted for your viewing pleasure by Joeymom at 9:26 PM

The park sounds like it gives you a little stress free time too. :)

It was a pretty good day in our neck of the woods, too.

Glad to hear that you got a chance to decompress a little bit.

I love Wakefield. If I am ever very rich, they are getting my money- in payment for my sanity.

I really enjoyed reading it and will visit to say hello in the future.